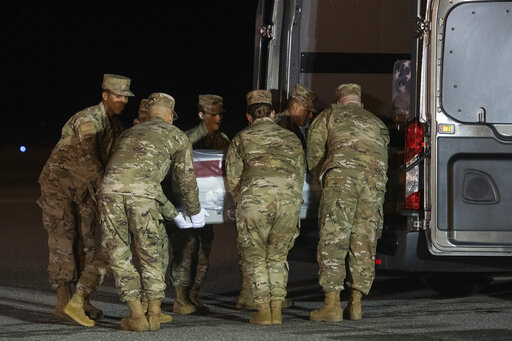 Florida Gov. Ron DeSantis said that the Saudi shooter at the Pensacola naval station had no constitutional right to have a gun and used a “loophole” to obtain it.

DeSantis said he was not aware of why a “loophole” exists.

“I had always thought that foreign nationals except for certain law enforcement just were not allowed to purchase firearms, so yeah, I think they should definitely look at that,” he said.

We wanted to know how the shooter was able to buy his weapon, too. Our analysis found that the law against gun purchases by foreign nationals does contain some exceptions for law enforcement and recreational hunting.

DeSantis is right that the Saudi shooter did not have a constitutional right to buy a weapon — but he did have a statutory one, said Stephen Halbrook, a Virginia lawyer who has represented the National Rifle Association.

Mohammed Alshamrani, a Royal Saudi Air Force officer training in Pensacola, obtained a valid Florida hunting license and used an federal legal exception for hunting to obtain the gun. (The FBI said that in addition to the hunting exception, other exceptions may have applied.)

The FBI said that a federally licensed firearms dealer in Florida sold the shooter a 9mm pistol made by Glock on July 20. He received a hunting license July 11, a state agency confirmed.

Laws that provide for certain foreigners to possess guns have been around for decades. But the hunting exception had drawn concerns before the Pensacola shooting.

Yahoo! News reported that the FBI issued a warning for businesses in May that foreign terrorists could exploit the hunting exception in the law to obtain firearms. (PolitiFact was unable to verify the memo independently, which Yahoo did not post in full. The FBI did not comment.)

The relevant federal law pertains to foreigners who are legally in the United States with “nonimmigrant visas,” such as a student or work visa.

Here is what the 1998 law says about the exceptions to allow such foreigners to obtain firearms:

An alien admitted to the United States under a nonimmigrant visa is prohibited from shipping, transporting, receiving, or possessing a firearm or ammunition unless the alien falls within one of the exceptions provided in 18 U.S.C. 922(y)(2), such as: a valid hunting license or permit, admitted for lawful hunting or sporting purposes, certain official representatives of a foreign government, or a foreign law enforcement officer of a friendly foreign government entering the United States on official law enforcement business.

The exceptions stemmed from legislation proposed by Democratic Sens. Dick Durbin and Edward Kennedy in 1997 following a shooting spree by a Palestinian at the Empire State Building. The shooter killed one and injured several others before killing himself.

Durbin said in 1998 that the exceptions were for foreigners who might need to own a gun for “very real and legal purposes” such as hunting.

President Bill Clinton called for Congress to pass the Durbin legislation. He also called for a new rule that gun applicants would have to certify that they had been residents for at least 90 days in the state where they were trying to buy a gun. Federal law already required the 90-day rule, but the firearm purchase form didn’t make that clear.

The Empire State building shooter, Ali Hassan Abu Kamal, traveled to Florida where he obtained an identification card and then purchased a gun following the three-day waiting period. (The waiting period was much longer in New York.) At the time, he had been in the United States for less than 90 days.

The United States has a long history of gun possession restrictions for people who are not U.S. citizens, said Pratheepan Gulasekaram, a Santa Clara University constitutional and immigration law professor.

In recent decades, the courts have interpreted broad gun rights under the Second Amendment while also pushing for restrictive immigration laws.

In the early 1900s some states passed laws that included rules that non-U.S. citizens had to follow in order to obtain firearms, according to laws compiled by Duke University.

For example, a 1911 Washington law stated that non-citizens who wanted to obtain a firearm had to first obtain a certificate from the consul stating that the person is “responsible.”

Between 1909 to 1923, multiple states banned people who were not U.S. citizens from capturing or killing animals except for in defense of person or property.

Later, the hunting exception came to be seen as a way to provide reciprocity with other countries.

Will it stay that way?

We asked a spokeswoman for DeSantis what should be changed in the law and did not get an answer response to that question. Florida Fish and Wildlife Commissioners have called for adjusting hunting licenses, though it’s too early to know what that would look like.