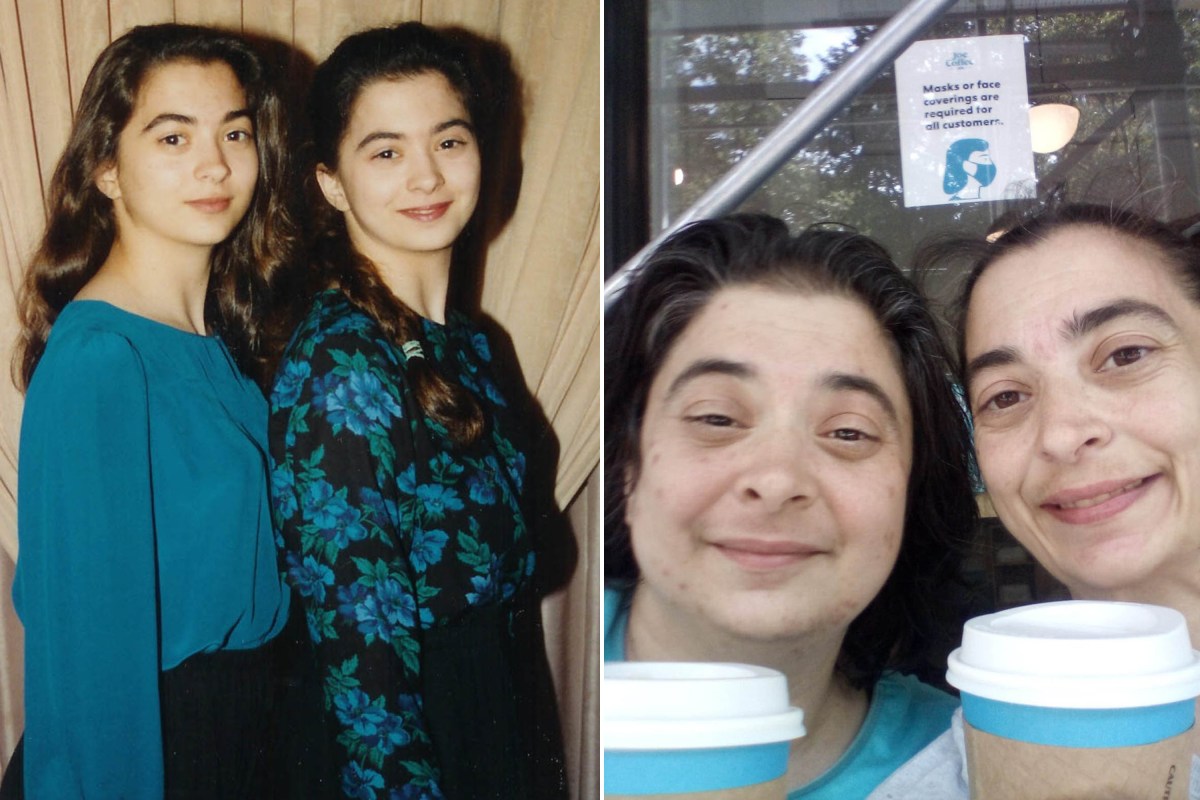 Laurie and Melissa Pittari grew up in a tight-knit family in New Orleans — both gifted students in high school, cellists in the city’s youth orchestra, with free rides to college.

Identical twins. Two, but one in so many ways. In sync, never far from the other — physically or emotionally.

Today, at 50, they live on the Upper West Side, on a sidewalk on Broadway near the corner of West 75th. What they own – a beat-up roller suitcase, blankets, plastic bags stuffed with stuff — is piled against what used to be a Jean Louis David hair salon.

Melissa huddles under a navy blue, scruffy throw. Laurie paces, bundled in an olive-colored coat, the hood pulled tight around her face.

“They can’t help us — the state, churches, shelter groups,” Melissa told The Post of their chronic homelessness. “We’re not old men.”

Laurie launches into a tirade about how the bank is keeping her from her money. “They won’t let me touch it,” she said. “They don’t like what I want to spend it on.”

The sisters have been in New York for nearly 15 years now. They took a long, winding road to being homeless on the streets of Manhattan, a journey that begins, like so many of the city’s 60,000 vagrants, with mental illness. According to their older brother Bart, they were diagnosed with schizophrenia more than 30 years ago.

Their sibling is convinced they could have different lives if only they didn’t push back against those trying to help them at every turn.

“It hurts that they’re out there. They’ll take the help only as long as it’s on their terms, then they say no one is helping them,” he said. “If there was something I could do, I would do it.”

The Pittaris were raised by a mom and a dad who never dreamed they’d have kids. Bart arrived in 1968, a dozen years after his parents married. Laurie and Melissa came along two years later, on Nov. 12, 1970.

Their parents enrolled them in music lessons. They learned the cello, the violin, the guitar, the piano. They dabbled in other arts. Laurie drew and painted; Melissa loved the stage.

They landed academic and music scholarships — Laurie to Loyola University in New Orleans, majoring in music therapy and minoring in cello, Melissa to the University of New Orleans, studying music education and hospitality.

Not long after they started, their mom lost her 10-year battle with cancer.

“I don’t think they could process our mother passing away,” he told The Post. “Then, they clutched on to a charismatic religious group and started going off the rails from there.”

Melissa managed to graduate from college; Laurie failed to finish her last requirement — a practicum at a mental hospital.

“It drained her,” Bart said, “and she just dropped out.”

In 2003, their dad died of heart trouble. They stayed in the house, the one Bart had left long ago.

“They became almost an episode of ‘Hoarders,’” Bart said, referring to the reality-TV show. “They took on a number of feral cats. It was something.”

Like thousands of other Big Easy denizens, Melissa and Laurie ended up in another city — Denver.

A year or two later, they told Bart that God had called them to New York so Melissa could pursue acting. Melissa gives a different reason: “You need a car in Colorado. Here, you can get around on the subway or take a bus.”

Shortly after they arrived in Manhattan, as Bart recalls, they were taken in by Goddard Riverside Community Center, a nonprofit that provides both homeless and mental health services. Spokeswoman Trish Anderton declined to comment on the sisters.

They ended up in different places – Laurie in an independent living program, Melissa in a convent that Bart thinks took in Katrina evacuees.

On her better days, Laurie played with the New York Chamber Orchestra and a few other chamber groups, Bart confirms.

“Laurie was making strides,” he said. “Melissa was taking advantage.”

Eventually, Melissa wandered back to the streets; Laurie followed.

They’ve settled at Broadway and West 75th. Sometimes, they watch YouTube videos on the cellphone that a friend gave them. Almost every day, they post on Facebook. Melissa has a page. So does Laurie. They’re friends with Bart until he tells them something they don’t want to hear. Then, they defriend him for a while. He laughs about it.

“I can’t give up on them,” he said. “But this won’t end well if they stay on the path they’re going.

PrevPreviousFLASHBACK: DiCaprio Panicked It Was ‘Too Late’ to Save Earth From Climate Horror
NextBiden’s Pick for Attorney General Couldn’t Be More Anti-ConstitutionalNext