Trump attacks No. 2 Senate Republican as the President turns on allies in his final days in office 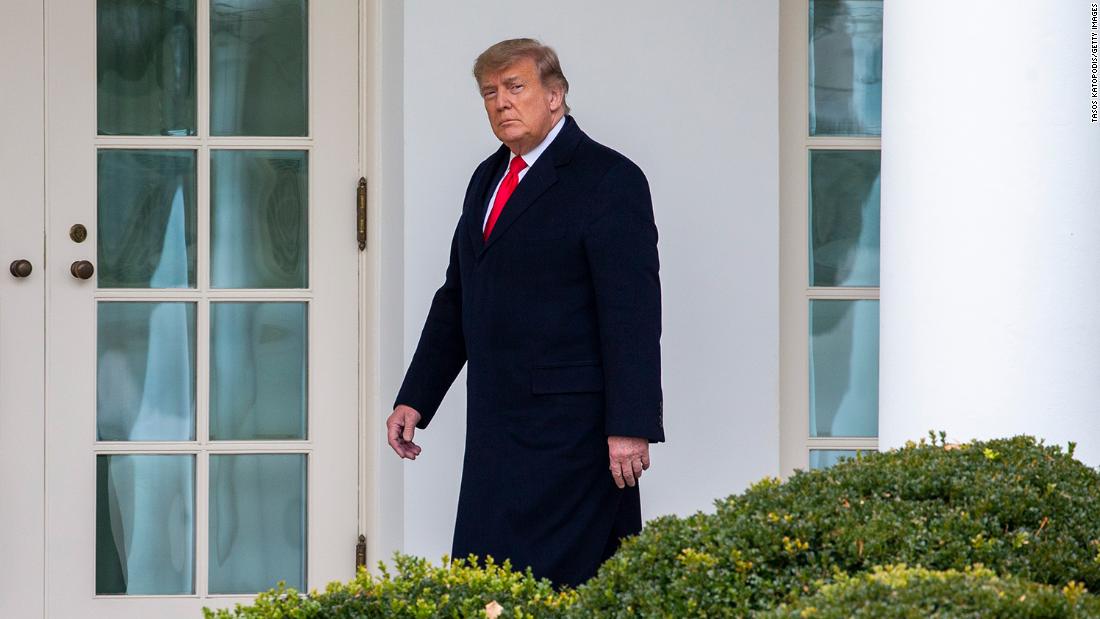 Trump, back at the White House after his Mar-a-Lago holiday with no public events on his schedule, attacked Sen. John Thune, a South Dakotan who is the No. 2 Senate Republican, in an afternoon tweet on New Year’s Day.
“I hope to see the great Governor of South Dakota @KristiNoem, run against RINO @SenJohnThune, in the upcoming 2022 Primary. She would do a fantastic job in the U.S. Senate, but if not Kristi, others are already lining up. South Dakota wants strong leadership, NOW!” he wrote in a tweet.

Trump has railed against Republican leadership broadly multiple times this week, but this time is naming names. Thune, the Senate majority whip, had been one of the top Republicans to speak in favor of accepting the Electoral College results and President-elect Joe Biden’s victory, drawing Trump’s ire.

“Once somebody gets 270, I understand they’re ruling right now, but I think that’s the process we have, yes. … In the end at some point you have to face the music. And I think once the Electoral College settles the issue today, it’s time for everybody to move on,” Thune said ahead of the formal electoral college voting process last month.

Trump’s tweet comes just 19 days before he leaves the White House and days before a joint session of Congress is set to formally certify the Electoral College results, with some Trump allies planning to join his baseless efforts to overturn the results of the election.

The President returned to Washington ahead of the January 6 event, when as many as 140 House Republicans, joined by at least one senator, Missouri Republican Josh Hawley, could vote to throw out electoral votes in key swing states Trump lost. Trump praised Hawley in a tweet Thursday evening.

On Friday, Hawley told reporters he has yet to decide how many states’ Electoral College results he plans to object to, saying, “I haven’t worked out the mechanism yet.”

Several of Hawley’s Republican colleagues expressed concern Friday over his plans, and the impact such a move could have on American democracy. Retiring Republican Sen. Lamar Alexander of Tennessee said he thinks Hawley’s planned objection is a mistake, while Utah Sen. Mitt Romney, a vocal Trump critic, said that “spreading this kind of rumor about our election system not working is dangerous for Democracy here and abroad.”

McConnell, who called the congressional certification “the most consequential vote” of his career, would not answer Friday when asked by CNN if he was considering any sanctions or punishments against the freshman senator if he goes through with the challenge that GOP leaders have strongly opposed.

Thune told reporters on Friday that “this is an issue that’s incredibly consequential, incredibly rare historically, and very precedent setting. So, our members are — this is a big vote, they’re thinking about it.”

“I think now that we’re locked in to do it, we’ll give air to the objections and people can have their day in court and we’ll hear everybody out and we’ll vote,” he continued. “Like I said, I think in the end, I don’t think anything changes.”

“We are letting people vote their conscience,” Thune said, with several Republican members saying there’s not much they can do to stop Hawley from objecting.

Trump is already beginning to preview how he’ll spend his post-presidency. In recent days, he has suggested Georgia Gov. Brian Kemp, who he had endorsed and had been a loyal Trump ally until the November vote, resign because he would not help overturn Biden’s win in that state. He has also repeatedly attacked Georgia Secretary of State Brad Raffensberger, another Republican who he had endorsed during the 2018 midterms.

The President has raised hundreds of millions of dollars since the November 3 election, a majority of which goes directly to a new fundraising leadership PAC, Save America, that is expected to aide him in donating to other candidates and political pursuits as he considers a potential presidential bid in 2024.

With this tweet, Trump is already planting the idea that he would support candidates offering primary challenges to current House and Senate Republicans he sees as disloyal.

For her part, South Dakota Gov. Kristi Noem, a top Trump ally, said last week that she would not pursue the Senate seat.

“@johnthune is a friend of mine, and I will not be challenging him. I’m honored to be Governor of South Dakota and will ask the people to give me an opportunity to continue serving them as Governor in 2022,” she wrote.

Republican Sen. Lisa Murkowski of Alaska blasted Trump for encouraging a 2022 primary challenge against Thune. She told CNN on Friday, “I think it’s quite interesting that he has demanded a loyalty test from so many Republicans and then when they are loyal to him — and there is one incident, one statement — and he is the first one to throw those loyal individuals under the bus. That’s not loyalty as I know loyalty.”

As a key member of the GOP leadership team, Thune has done much to advance Trump’s causes on Capitol Hill — from passage of tax cuts and other legislation, confirmations of Supreme Court nominees and numerous other judges, as well as critical acquittal votes during Trump’s Senate impeachment trial — even if he has spoken out occasionally about some of the President’s most controversial acts.

For his part, Thune shrugged off the presidential tweet with laughter.

“Yeah, well, finally an attack tweet. What took him so long?” a calm and soft-spoken Thune told reporters as he was leaving the Capitol after the vote to override Trump’s veto of the defense bill. “It’s fine, that’s the way he communicates.”

Thune said there has been no effort to patch things up with the President: “No, I’m not sure what I did to be deserving of all that but that’s, that’s fine. Like I said, I’m not sure that if anything changes his mind once he makes it up.”

This story has been updated with additional reporting.