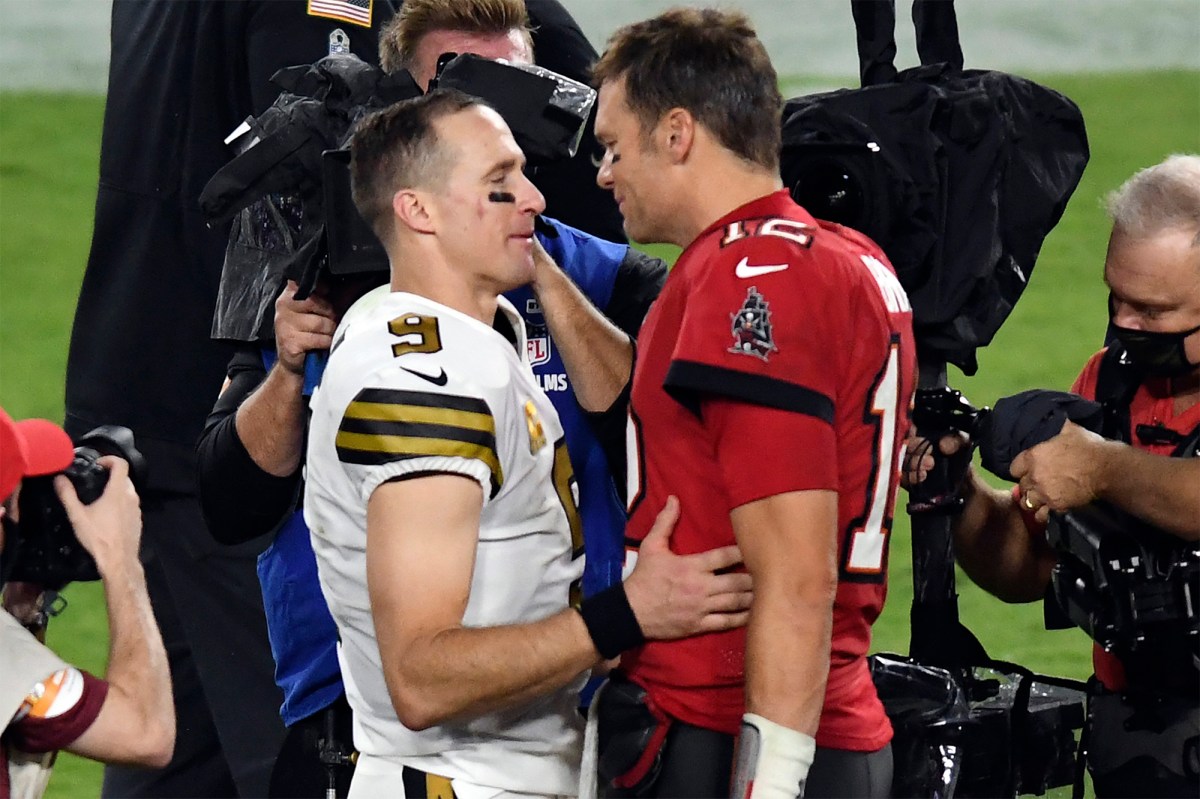 Drew Brees and Tom Brady, the NFL’s respective all-time leaders in career passing yards and touchdown throws, finally will meet in postseason play for the first time in their illustrious careers.

The 40-something future Hall of Famers will face each other next Sunday in New Orleans after Brees and the Saints took care of the Chicago Bears, 21-9, in a first-round NFC playoff game Sunday at the Superdome.

Brees, who will turn 42 on Friday, threw for 265 yards and two touchdowns to join Brady and Brett Favre (2009 with Minnesota) as the only quarterbacks in their 40s to win a playoff game.

Tampa Bay’s 38-3 loss to the Saints in November was the worst point differential of the 43-year-old Brady’s 21-year NFL career, and he threw five of his 12 interceptions this season in the Buccaneers’ two losses to their NFC South rivals. Brady totaled 381 passing yards with two touchdowns Saturday night in a 31-23 win over Washington.

Brees is believed to have first fractured multiple ribs – an injury that sidelined him for four weeks – in the second game against Tampa Bay on Nov. 8.

Sunday’s game also was simulcast and catered to a younger audience on Nickelodeon, replete with character tie-ins and virtual “slime” cannons being shot off after touchdowns.

“I would be willing to be slimed if we won, whatever that means,” Saints coach Sean Payton told the network before the game.

The Bears finished the regular season with an 8-8 record and were playing their first postseason game in New Orleans since they won the only Super Bowl championship with a 46-10 win over New England to conclude the 1985 season.

The sides actually had faced off in the playoffs twice in the ensuing 35 years with the Bears winning both of those games in Chicago in 1991 and in the 2006 NFC Championship game.

The Saints, who also pulled out a 26-23 win in overtime in Chicago in Week 8 earlier this season, held Mitchell Trubisky and the Bears’ offense Sunday to 239 total yards and 10 first downs.

Nick Foles had started the previous game against the Saints in place of a benched Trubisky, who returned as the starter in late November and led Chicago to three wins in their final four games to clinch its second playoff berth in three years.

Thomas didn’t score a regular season touchdown in seven games this season, one year after setting an NFL record with 149 catches for a league-leading 1,725 yards in 2019.

Brees found Thomas over the middle, however, for an 11-yard scoring play with 5:09 remaining in the first quarter to open the scoring. Backup quarterback Taysom Hill lost a fumble later in the half, and the Saints led 7-3 at halftime after Cairo Santos kicked a 36-yard field goal for the Bears with 8:06 left before intermission.

Bears receiver Anthony Miller was ejected in the third quarter for unsportsmanlike conduct, and Brees led the Saints on a nearly eight-minute scoring drive, including a 38-yard pass to Thomas and a 6-yard check-down to Latavius Murray for a touchdown to extend the lead to 14-3.