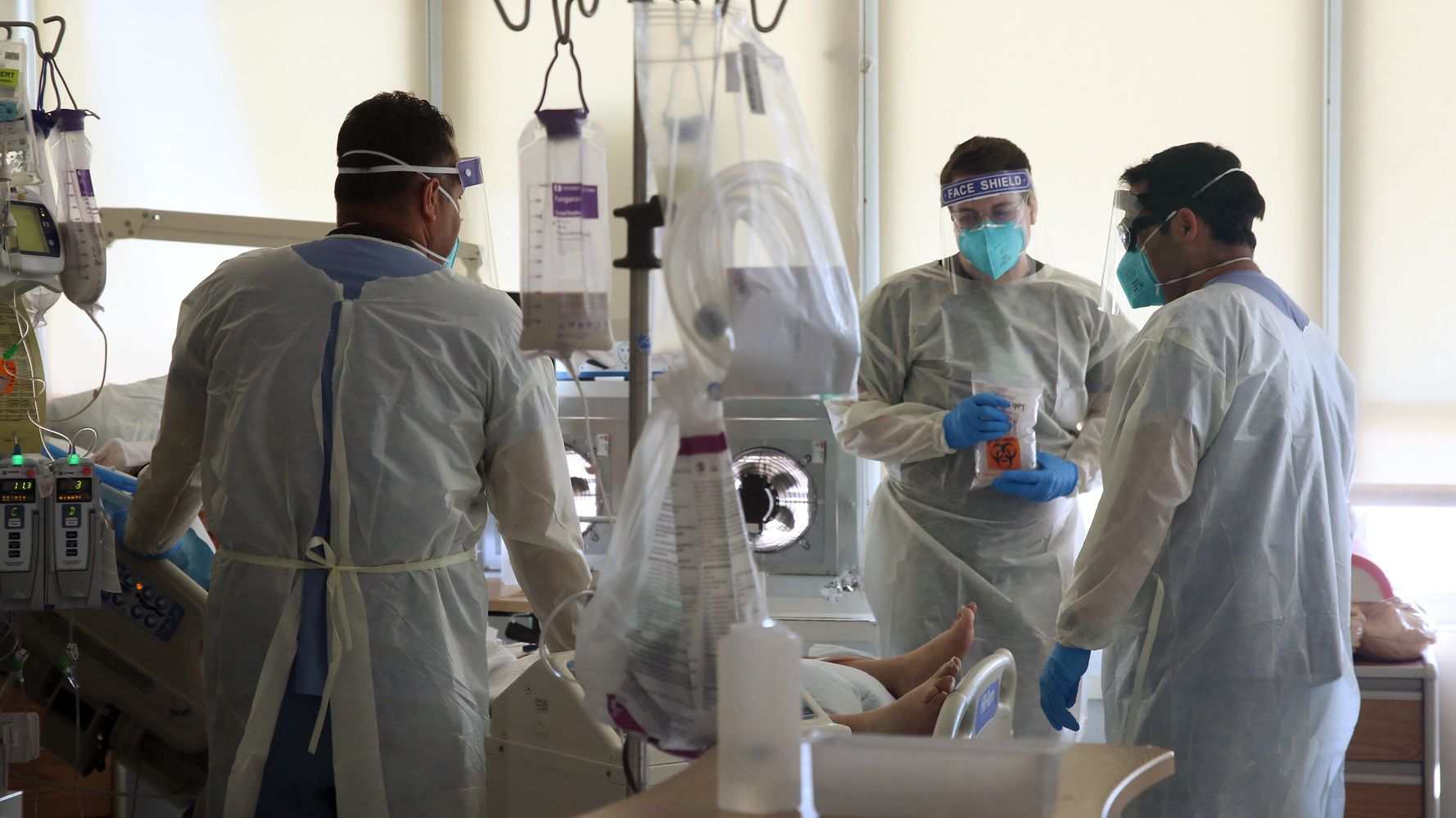 It’s hard to grasp that the stories coming out of Los Angeles County’s COVID-19 outbreak are happening on American soil: patients dying in crowded hospital hallways, medical providers running out of oxygen canisters and dead bodies piling up with nowhere left to store them.

The county surpassed 10,000 coronavirus deaths on Wednesday, as well as its single-day record of COVID-19 deaths with 262 fatalities.

The horror stories doctors, nurses and other people on the front lines of the pandemic have shared with The Los Angeles Times and other local media outlets have revealed a community under siege.

Here’s how bad the situation has become.

Hospitals are running out of oxygen and other critical tools

At least five hospitals across the county have declared internal disasters after running dangerously low on oxygen, which must be administered to COVID-19 patients struggling to breathe through their inflamed lungs.

Critically ill coronavirus patients need to receive about 10 times more oxygen per minute than the average patient sick with another disease, the Times reported. Between that and the overwhelming number of cases, aging hospitals simply don’t have the infrastructure to deploy enough high-flow oxygen treatment.

“They’re not able to maintain the pressure in the pipe to maintain oxygen delivery at that high level of pressure that’s required to be delivered through the high-flow oxygen delivery vehicles,” Dr. Christina Ghaly, the county’s Health Services director, told CNN on Tuesday. “Because of that high flow through the pipes, sometimes it’s freezing in the pipes, and obviously if it freezes then you can’t have a good flow of oxygen.

There is simply not enough care to go around with a surge this bad.

Scott Byington, a critical care nurse at St. Francis Medical Center in Lynwood, told the Times on Thursday that his hospital confronts grim options, especially when patients need oxygen or care from a BiPap machine, which helps push oxygen into a patient’s lungs.

“You have to pick and choose,” he said. “That’s where we really are — we’re really at that point.”

Southern California’s intensive care unit availability has hovered around 0% for weeks now. Dr. Kimberly Shriner, an infectious disease specialist at Huntington Hospital, told Southern California Public Radio that her hospital has had to form a special committee to make the tough choices about who receives such care and who doesn’t.

“No health care worker ever wants to have to be put in the position to make this decision,” Shriner said. “Our job is to save lives and provide the very best care for everybody we can, but sometimes there’s just a limit to how many resources we have.”

Patients are being treated in gift shops, chapels and hallways

Hospitals have had to convert unlikely areas of their buildings into spaces to treat patients.

At Martin Luther King Jr. Community Hospital, the excess of patients has forced some patients to be placed in the gift shop, a chapel and conference rooms, CNN reported. That’s on top of the five tents already set up outside the hospital to manage the influx of patients.

At St. Francis, the hallways of the emergency room are lined with patients, the Times reported. Some have died there.

There are more dead bodies than the county can manage

The surge in cases has led to “a backup of dead bodies at a variety of facilities and hospitals across the county,” Ghaly said at a press conference Wednesday.

Members of the National Guard are heading to the county coroner’s office next week to help the department manage the bodies. Meanwhile, some hospitals have hauled in freezer trucks to store the corpses. Los Angeles County Supervisor Janice Hahn on Thursday asked Gov. Gavin Newsom (D) for his help in having the USNS to USNS Mercy hospital ship dispatched to the area.

“This surge is the crisis that we dreaded all along,” she wrote to Newsom. “We need as much support as we can get for our health care workers, and we need the USNS Mercy back in the Port of Los Angeles.”

Funeral homes are overwhelmed by families seeking to make arrangements for their dead loves ones.

Kenneth McKenzie, a mortician in Long Beach, told The Long Beach Post this week that he’s handling 10 to 12 bodies each day, up from his typical three to four. This week, he received an entire family lost to COVID-19: a brother, a sister, a mother and an uncle.

“Their house is empty,” he said, adding, “This is the side of it that nobody wants to talk about.”

People are getting turned away from emergency rooms

The hospitals that declared internal disasters are turning away ambulances. Over last weekend, 96% of hospitals in the county were diverting emergency patients elsewhere, CBS Los Angeles reported.

The county has given ambulances permission to decline to take low-risk patients with mild symptoms to hospitals under certain circumstances. At the other end of the medical spectrum, patients whose hearts have stopped and can’t be revived by first responders are not being taken to hospitals.

Hospitals in low-income areas and communities of color have been affected the hardest by the surge in cases, a Times analysis of hospital data showed this week. Many of these facilities serve South Los Angeles and the southern San Gabriel Valley.

This follows the pattern of the impact of COVID-19 nationwide. Across the U.S., Black, Latinx and Native American people are around four times more likely than white people to need hospital care if they catch the coronavirus. And these segments of the population are nearly three times more likely to die from it, according to the Centers for Disease Control and Prevention.

Los Angeles grocery stores, whose employees are largely minimum wage workers, are getting hit harder than ever by the virus, an investigation by NBC Los Angeles found this week. The grocery workers union has reported COVID-19 outbreaks at more than 137 Los Angeles area supermarkets in the past two months, affecting 854 supermarket workers.

“It’s so busy in the stores and there’s so many people, we were bound to get it,” Bertha Montes, a bakery worker at a Pasadena grocery store, told NBC.

She unknowingly spread the virus to her husband, daughter and grandson. “I felt so guilty,” she said.

The Health Department’s Twitter has become a memorial page

On Thursday, the county health department has been pleading with people to stay away from New Year’s Eve festivities by tweeting out a description of someone killed by COVID-19 every 10 minutes.

The tweets have been brief but heart-wrenching: “The organic farmer with his own stand at the Farmer’s market.” “A husband who was still head over heels in love after 40 years of marriage.” “The grocery store clerk who always asked about your kids.”

The worst is yet to come

Holiday gatherings people had in violation of local and statewide orders are sure to cause another surge in cases as infections linked to those events begin to surface.

“We’re not seeing the effects of Christmas or New Year’s gatherings yet, but we fear that the numbers are only going to increase,” Dr. Thomas Yadegar, a pulmonologist and medical director of the intensive care unit at Providence Cedars-Sinai Tarzana Medical Center, told Los Angeles Magazine.

A HuffPost Guide To Coronavirus