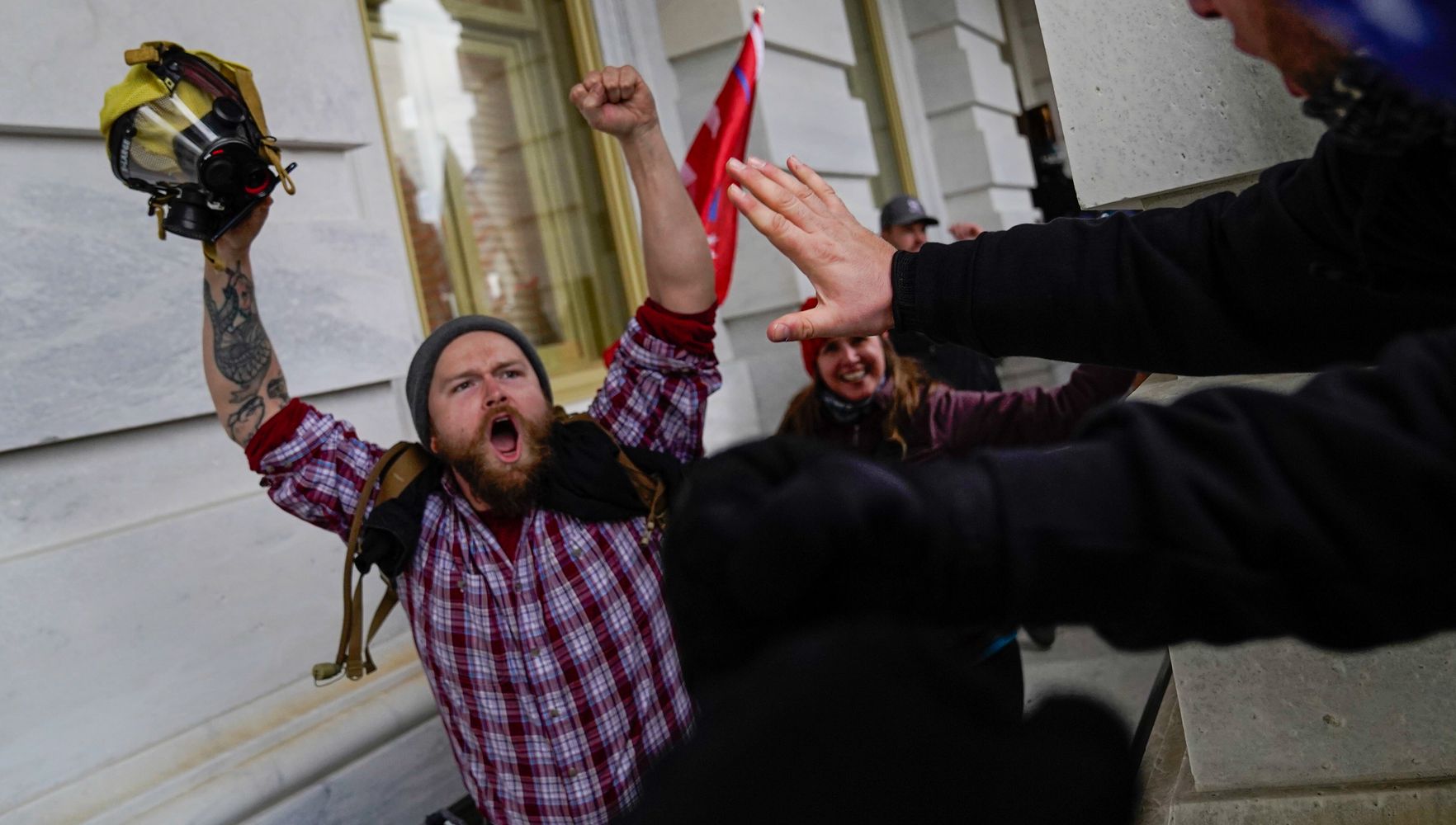 The most widely distributed images of the riot at the U.S. Capitol on Wednesday captured unprecedented — and certainly shocking — behavior.

They feature ostentatious participants — like the bare-chested man wearing a horned hat and face paint, who looked like he was headed to a football stadium on game day — or rioters in striking poses, propping their feet up on a desk in House Speaker Nancy Pelosi’s office or toting Pelosi’s stolen lectern through the Rotunda.

In video footage aired on CNN, a buoyant young man mentions that somewhere inside the Capitol had been dubbed the “weed room,” as if the riot were just a rowdy house party. A number of grainy photos showed various people, some draped in Trump flags, posing on the Senate floor like it was a theme park attraction.

But as more videos and photos have emerged in the days since, it’s become clear that the footage that initially circulated online and in media coverage did not capture the startling degree of violence that rocked Washington, D.C., this week and left five people dead. Video footage and first-person accounts helped reveal how the incident could have been even deadlier.

“You’ll never take back our country with weakness,” President Donald Trump told his supporters, shortly before they knocked over fences and forced their way into the Capitol building. “You have to show strength, and you have to be strong.”

New York Times photographer Erin Schaff described how she thought she might die inside the Capitol, after a small group of men confronted her and demanded to know who she worked for.

“Grabbing my press pass, they saw that my ID said The New York Times and became really angry,” Schaff wrote on Thursday. “They threw me to the floor, trying to take my cameras. I started screaming for help as loudly as I could. No one came. People just watched. At this point, I thought I could be killed and no one would stop them.”

Schaff made it out safely, but only after police officers trained their guns on her until other journalists stepped in to vouch for her as a member of the press.

“This will be the start of a civil war revolution,” Schaff said one of the rioters told her.

Revolution was a common refrain. Some of the rioters appeared to genuinely believe their actions could trigger a political shift leading to a second term of Trump’s presidency ― and it is not clear how far they were willing to go.

Jim Bourg, a Reuters photographer, said that he heard “at least” three different rioters say they wanted to find the vice president and execute him as a traitor by hanging him from a Capitol Hill tree.

Trump had repeatedly voiced how angry he was at his vice president’s role in the election certification process, arguing that Pence had the power to reject Electoral College votes and overturn the final results, which he does not. (Pence’s role in the official Electoral College count ― usually a formality conducted without much national attention ― was largely ceremonial.) The vice president was fulfilling that role when Secret Service officers abruptly pulled him from the Senate chamber for his own safety on Wednesday, as rioters breached the Capitol building.

Outside, a group of Trump supporters smashed up audiovisual equipment being used by Associated Press reporters, fashioning multiple nooses out of their cables.

At least two rioters, one in military attire, were pictured carrying heavy-duty zip ties — the kind that police use in mass arrest situations. One of them, Air Force combat veteran Larry Rendall Brock Jr., told The New Yorker that he just happened to pick them up off the ground and forgot he was carrying them.

The FBI is investigating whether some of the rioters intended to take members of Congress hostage or even kill them, with one official telling The Washington Post that the agency is “interested in learning what people would do with things like zip ties.” One man was arrested for allegedly carrying a pistol at the scene, the Post reported.

While some of the people who breached the Capitol appeared awed to have made it into the marbled halls of power, many others seemed to be fueled by intense anger as they rampaged through the building.

They frequently, violently clashed with police officers, leaving more than 50 injured and one dead. Capitol Police Officer Brian Sicknick died Thursday from injuries sustained during the insurrection, when a rioter hurled a fire extinguisher at his head, according to law enforcement.

Video taken from outside the Capitol shows how it might have happened amid the chaos: A handful of people in a sea of flag-waving Trump supporters break through a line of police officers and reach the main steps of the building. While most of the law enforcement officers are wearing helmets, one of them ― in a yellow vest ― is not; he becomes the target of a rioter who picks up a fire extinguisher and throws it at the helmetless officer, hitting the cop in the head and appearing to daze him.

HuffPost was not able to confirm that the officer injured in the clip was Sicknick, though Sicknick sustained a similar injury before later collapsing at his division office.

The incident was not an isolated one. When officers did not stand back and let rioters do what they pleased, they often became targets for the mob.

One video shows a Metropolitan Police officer screaming in pain as a wall of rioters crushes him in a door. The scene is mayhem: A group of officers appears to be stuck in a hallway, facing off against a group that, at one point, repeatedly heaves itself against the officers, who cannot move.

This is what the pro-Trump mob did to American law enforcement officers after the President incited a deadly riot at the U.S. Capitol

According to retired Metropolitan Police Chief Charles Ramsey, the officer heard screaming on video sustained non-life-threatening injuries. “He’ll be out for a while ― obviously very sore,” Ramsey said Saturday on CNN.

A riot participant and self-described activist, John Sullivan, posted lengthy video on YouTube that provides one of the clearest views of the siege. The rioters cheer each other on as they break windows at the front of the Capitol and move excitedly through it, chanting, “Whose house? Our house!” Sullivan can be heard talking about wanting to burn the entire building down.

Sullivan’s footage ends with the graphic death of Ashli Babbitt, the 35-year-old woman shot in the neck as she tried to climb through a barricade leading to the House floor. At the time, some lawmakers were still inside, according to a detailed Bellingcat investigation. The group Babbitt became a part of was angry. Sullivan’s video shows one man repeatedly punching the window until it cracks. A few people appear alarmed by a handgun that appears from around a corner beyond the barricade, but Babbitt begins climbing through a window anyway ― at which point the gun fires at her.

Police officers in riot gear appear almost immediately after Babbitt falls to the floor and attempt to administer first aid while also trying to clear the hallway of people.

Three other people were killed during the riot in what officials called “medical emergencies.” Further detail on the deaths has not yet been made public.

The FBI is currently seeking the public’s help in identifying others who stormed the Capitol and, so far, more than 80 people have been arrested in connection with the riot.

Wednesday’s insurrection sent a shock around the world. It marked the first time since 1814 that the U.S. Capitol had been breached, and it claimed more lives than the 2012 attack on U.S. government facilities in Benghazi, Libya.

Yet with more than a week left in Trump’s term, there is concern that more rioting is in store for the nation’s capital as the president still refuses to acknowledge that he lost the 2020 election fair and square.