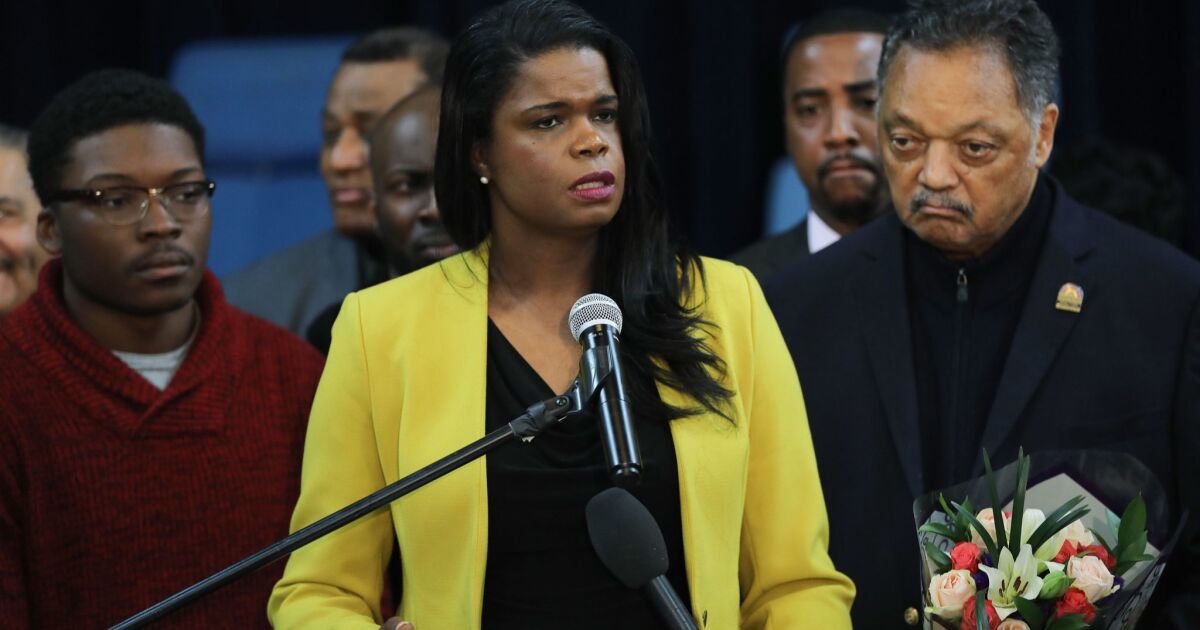 With the tap of a computer key, prosecutors in Los Angeles and Chicago plan over the coming weeks to erase tens of thousands of marijuana convictions from people’s criminal records, a key part of a progressive crime-fighting strategy that is seeking to rectify the wrongs of a decades-long drug war.

Prosecutors and legal aid advocates say purging arrest and conviction records removes barriers to jobs and housing, helping to stabilize and improve troubled communities. Jettisoning marijuana convictions has taken on added urgency as more states legalize the possession and sale of marijuana, a lucrative trade, and confront the vexing question of how to handle convictions for crimes that are no longer crimes.

“We are undoing the harm prosecutors have caused,” said Cook County State’s Atty. Kim Foxx, whose office handles prosecutions in Chicago, a city of 2.7 million residents, and who has been one of the leading national advocates of expunging people’s records.

“Prosecuting these cases was not in the public interest, or in the interest of public safety. These convictions kept people out of the housing market, job market,” Foxx said. “Folks are going to be making billions of dollars on this, selling it by the metric ton, on the backs of communities that were devastated by the war on drugs. Is that fair? No.”

Foxx plans on Wednesday to begin clearing nearly 18,000 misdemeanor convictions for possessing less than an ounce of marijuana. The convictions are the first of potentially hundreds of thousands of marijuana cases, including felonies, that could be wiped from the county’s court system.

“So many people, particularly in communities of color, have been disproportionately affected by cannabis convictions,” Dist. Atty. Jackie Lacey said in a statement. “My prosecutors are working diligently to ensure that we are on track to expunge or reduce 50,000 felony convictions in coming weeks.”

Lacey is seeking reelection next year and facing a challenge from former San Francisco Dist. Atty. George Gascon, who led an effort to purge marijuana convictions in his previous post.

Prosecutors are clearing convictions in response to state legislation that requires the automatic clearing of such criminal records. California, Illinois and New York have passed laws that put the onus on officials to clear the records, and other states are likely to follow suit.

Critics argue that automatically erasing such records is a mistake for a variety of reasons. The process could lead to errors, and convictions should be cleared on a case-by-case basis, not under a blanket policy, they say. Marijuana also has serious collateral consequences, they argue, pointing out that the illicit marijuana trade often was tied to violent drug gangs.

“These are people who were convicted of making a decision to break the law,” said Bob Bushman, president of the National Narcotic Officers’ Assns.’ Coalition. “It was illegal when they did it and their convictions were the consequences for their illegal actions. They shouldn’t get a free pass like it never happened.”

“Frankly, we see this as another attempt to normalize and make drug use acceptable,” Bushman added. “We’re going down a very slippery slope when we allow people to choose what laws they want to respect and obey, and which ones they don’t.”

Advocates counter that clearing minor marijuana convictions is a small step in addressing decades of drug enforcement that disproportionately targeted minorities. Studies have shown that people of color are more likely to be arrested and punished in connection with marijuana offenses, even though white, black and Latino people use and sell marijuana at similar rates.

The result of that unequal enforcement, progressive prosecutors and advocates say, is a cycle of poverty and incarceration that has kept many minorities from getting jobs, going to school or finding housing.

“It’s truly the gateway conviction,” Foxx said in an interview in her Chicago office.

That is true for many of Regina Hernandez’s clients. A lawyer for Legal Aid Chicago, a nonprofit group that provides lawyers to the poor, Hernandez said her clients are eagerly awaiting the clearing of their marijuana records. After the county erases those cases, Hernandez will help clients seal other, often more serious, convictions.

“Automatic expungement is a very good first step,” Hernandez said. “Our clients often have very complicated records. And marijuana is often the first conviction and then they can’t get jobs or housing, and then there are more convictions.”

To speed their work, prosecutors are getting help from Code for America, a nonprofit that aims to improve government efficiency by writing software to improve government services. The group has played a key role in automating the expungement process by creating programs that comb digital records and generate the required court motions to vacate convictions.

As district attorney in San Francisco, Gascon joined forces last year with Code for America, and the group aided in clearing more than 8,000 convictions — before the state even passed the law requiring prosecutors to take such action.

“It took just 10 minutes to do it, once they flipped the switch,” Gascon said. “It was crazy fast.”

Gascon said he automated the process because manually clearing convictions devoured manpower. Erasing such convictions was too important, he said, to allow the process to drag on for months, or years.

Outside experts and advocates say the push to automatically clear pot convictions will gain more traction as more states legalize marijuana, the public becomes more comfortable with the drug’s use and progressive prosecutors become more influential in the criminal justice system.

In addition to the three states that have passed laws for automatic expungement of conviction records, 12 others have enacted laws that allow residents to seek the erasure of low-level cannabis convictions. The legal process is time-consuming, complicated and often requires a lawyer, however, so many people aren’t taking advantage of the opportunity, advocates say.

“States are saying, ‘Because we are now regulating this, and it is a big industry, we need to undo past injustices,’” said Sam Kamin, a professor of law at the University of Denver who focuses on marijuana policy. “They want to make this as easy as possible. It’s the fair thing to do.”

Eleven states and the District of Columbia have legalized marijuana for recreational use, with additional states legalizing medical pot. California voters in 2016 approved Proposition 64, which legalized, among other things, having and buying up to an ounce of marijuana, and allowed people to grow up to six plants for personal use.

The Proposition 64 changes were retroactive, which meant people convicted of marijuana offenses could petition to clear or reduce their records. But the process was time-consuming and hard to navigate, so few people sought relief.

Last year, the state passed a law requiring the California Department of Justice to create a list of everyone potentially eligible to get their records cleared and provide it to local prosecution offices.

Prosecutors are required to review all the cases by July 2020 and decide whether to challenge any dismissals or reductions. They must then inform the courts whether they agree with an expungement or will seek to block it.

Assemblyman Rob Bonta (D-Alameda) said he introduced the bill to make the process automatic because after Prop. 64 passed, he was frequently asked to help fund workshops to explain to people how to clear their records.

“I would ask myself, why are we doing this at all? … Why are they going through all these hoops, all these hurdles?” Bonta said. “Good government takes that wall away and brings you closer to your rights. It doesn’t put barriers in the way.”

Illinois’ state legislature in June became the first to pass a law legalizing the possession and sale of up to an ounce of marijuana (laws in other states were approved in referendums). The law also included a sweeping provision for the automatic expungement of low-level marijuana convictions by state officials and local prosecutors.

Foxx pushed hard for the measure, speaking about it in personal terms. She grew up in a public housing project, she said, and her mother smoked marijuana nearly every day to deal with bipolar disorder.

“She told me it leveled her out,” Foxx recalled. “She never was arrested for it, but if she had been we could have lost our housing. The idea she could have been considered a criminal is absurd. She wasn’t out there hurting people.”