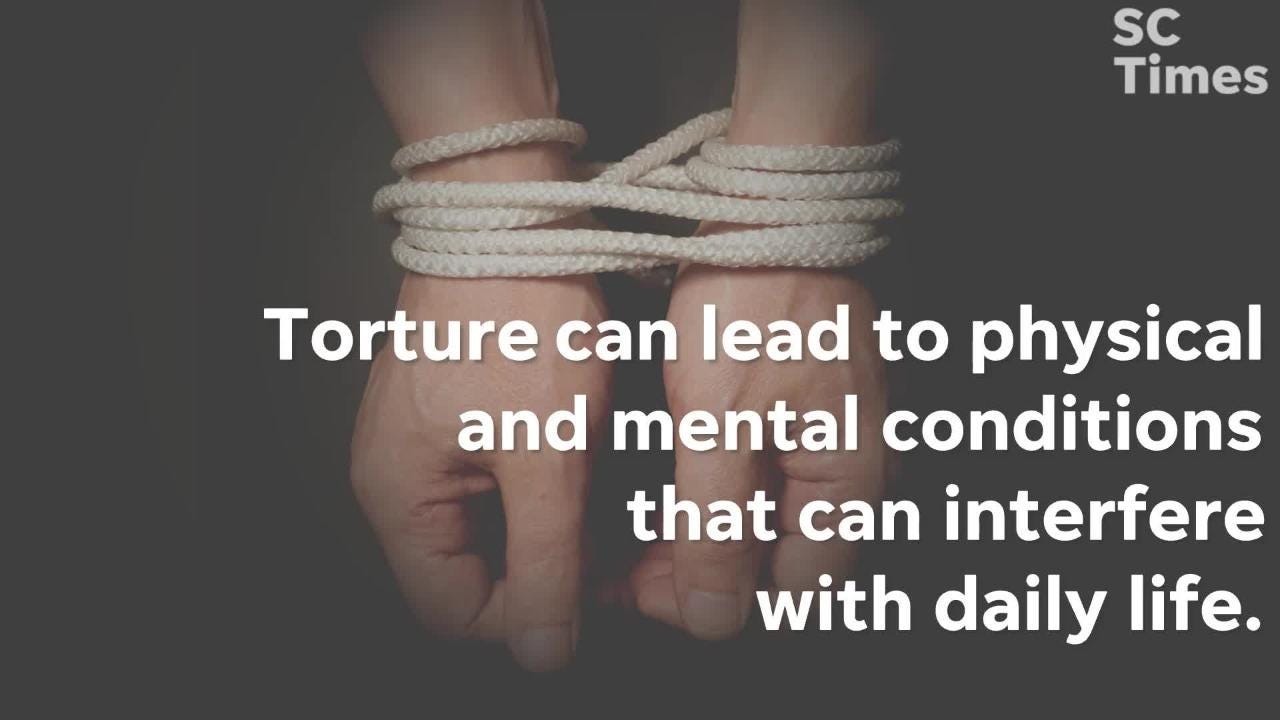 The drawings show the detainee crouched and handcuffed in a small box; naked and strapped to a table as water pours over his covered face; shackled as an interrogator slams his head into a wall.

The graphic self-portraits, drawn in captivity by a Guantanamo Bay detainee, provide a new and harrowing account of the CIA’s torture program during a dark chapter in the U.S. war on terror. They were published for the first time this week in a report, called “How America Tortures,” by the Seton Hall University School of Law’s Center for Policy and Research.

“I don’t recall how long I stayed in the standing position, but I know that I passed out while … my hands were tight to the upper bars. I felt they became paralyzed or severed. They were blue or green. The chains had left some traces of blood,” said Abu Zubaydah, the detainee, in a description of a torture tactic called “wall standing.”

Just days after the 9/11 attacks, President George W. Bush authorized the CIA to begin covertly detaining people it suspected of being terrorists. The Department of Justice provided a set of memos to outline what interrogation techniques were allowed and offered a legal defense for their use.

The Seton Hall report offers details of those tactics and how they were applied, drawing on statements from detainees, CIA cables and government documents. The torture used on detainees was even worse than what was officially allowed, the authors wrote.

Abu Zubaydah “was subjected to treatment so egregious that the CIA sought and received official governmental assurances that their prisoner would ‘remain in isolation and incommunicado for the remainder of his life,’” Mark Denbeaux, the center’s director and a co-counsel for Abu Zubaydah’s defense,said in a news release.

“The CIA even arranged for his cremation in the event he died, assuring what they hoped would be his silence even beyond the grave. But with this report, he is silent no more.”

Abu Zubaydah was captured in Pakistan in 2002 and accused at the time of being a high-ranking member of al-Qaida, an allegation that officials now concede was mistaken, according to a 2014 U.S. Senate report. During his detention, the CIA sought and received approval to use new interrogation techniques to use on Abu Zubaydah.

The “torture memos,” as they came to be known, outlined 10 tactics that could be used on him. Treated as a test case for the program, Abu Zubaydah faced all 10 and later shared illustrations and statements detailing his experiences.

A lack of clarity and “purposeful ambiguity” in the memos — coupled with a government failure to act on the use of unapproved tactics — led to widespread abuses, according to the report. The tactics that started with Abu Zubaydah were also broadly used on other detainees at CIA “black sites” and at Guantanamo Bay, including individuals who were never charged or convicted of any crime, the report said.

In statements collected by his lawyers and reprinted in the Seton Hall report, Abu Zubaydah described a tactic know as “walling,” in which interrogators wrapped a towel around his neck and used it to swing him around, smashing him repeatedly against the walls of the room while shackled.

“He was twisting a thick towel which was wrapped with plastic tape so it could be given the shape of a noose,” Abu Zubaydah wrote. “He wrapped it around my neck and brutally dragged me. I fell on the floor with the bucket [of my own excrement], with all its contents that fell on me.”

Five years later, the U.S. Senate Select Committee on Intelligence released a 500-page report — a summary of a 6,700-page still-classified investigation — about the torture program.

The report found that the “enhanced interrogations” didn’t elicit meaningful intelligence from suspected terrorists or foil plots against Americans. It also said the program went far beyond approved techniques and that the CIA lied about its use of torture.

Abu Zubaydah was one of the first people known to be subjected to waterboarding by the CIA  and was repeatedly subjected to the tactic. In an illustration, he drew himself strapped naked to a table with a towel over his head as water is poured over him.

“They kept pouring water and concentrating on my nose and my mouth until I really felt I was drowning and my chest was just about to explode from the lack of oxygen. [T]hat was the first time and the first day that I felt I was going to die from drowning,” he said.

He described excruciating pain from being confined to a small box and sleep deprivation that lasted for “maybe two or three weeks” causing him to hallucinate as guards threw cold water on him and shook him to prevent sleeping. His drawings show him naked, his face wrenched in pain, with spots of red to signify bleeding.

Abu Zubaydah was held in secret prisons by the CIA for four and a half years and is still detained in Guantanamo Bay. He has not yet been charged with a crime, but his lawyers have urged the government to do so, so they can challenge his confinement.

The 2014 Senate report said the CIA had eventually concluded Zubaydah was not a member of al-Qaida.

The Senate report is the subject of a movie, called The Report, now playing in theaters and starring Adam Driver as Daniel Jones, the lead investigator into the CIA program.