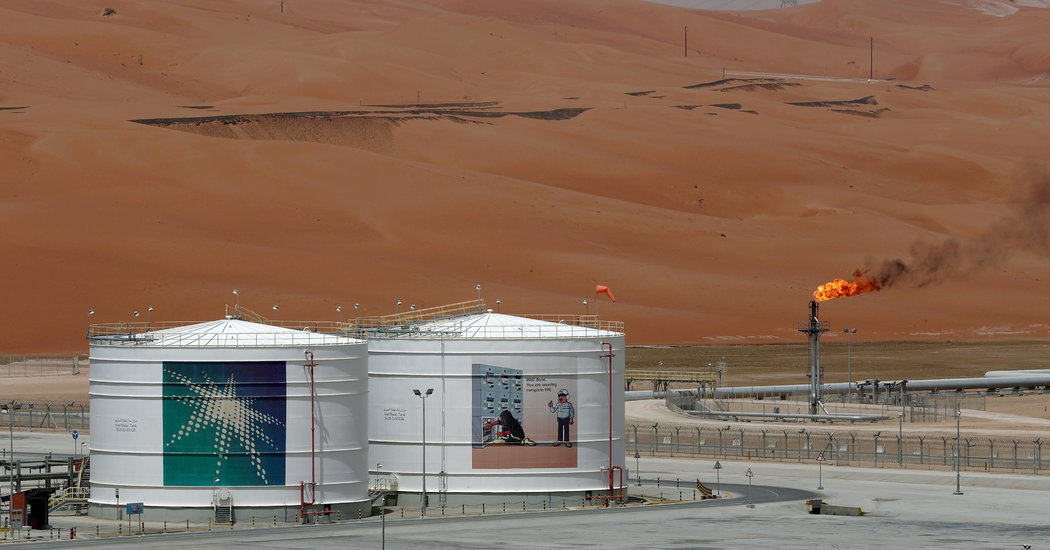 Shares of Saudi Aramco surged in their trading debut on Wednesday, further solidifying the oil giant’s status as the world’s most valuable company and bringing it closer to achieving the Saudi royal family’s aim of making it a $2 trillion business.

The shares rose 10 percent within seconds after their debut on the Saudi stock exchange in Riyadh, reaching the largest daily increase permitted by the exchange. They traded at 35.20 riyals or about $9.50 a share.

The surge brought the company’s value to about $1.87 trillion, substantially larger than Apple at about $1.19 trillion. At that level, it could soon reach a market capitalization of $2 trillion, a goal the Saudi leadership missed in Saudi Aramco’s initial public offering but still wants to achieve.

The launch is expected to raise at least $25.6 billion, making it the largest I.P.O. ever. It also completes a long, twisting journey that began about three years ago when Crown Prince Mohammed bin Salman, Saudi Arabia’s chief policymaker, first said he wanted to sell a stake in the state-owned company.

Along the way, the sale plans encountered headwinds including downward pressure on oil prices, an aerial attack on key Aramco facilities in September and skepticism that the company is worth the $2 trillion target originally set by the prince.

In November, the Saudis largely gave up on most global investors and turned to local and regional buyers, downgrading the role of Wall Street banks in favor of Saudi financial institutions, including Samba, a former Citigroup affiliate, and the British bank HSBC.

Staying local, where Aramco is regarded as a crown jewel, and limiting the number of shares offered to just 1.5 percent of the company have helped the Saudis achieve what appears to have become their main goal: a high valuation for Aramco, announced at $1.7 trillion last week (though still short of the $2 trillion target).

The offering attracted demand for more than four times the amount of shares offered, allowing Saudi Aramco to set the initial share price at 32 Saudi riyals, or $8.53, the high end of the range published last month.

The current argument over what Aramco is worth may only be settled months from now after the short-term factors have played out. What is likely to matter over the long term is how much revenue Aramco produces, which will be largely determined by oil prices and Saudi policy.

To prop up oil prices, the Saudis pushed for new cuts at the meeting of the Organization of the Petroleum Exporting Countries that ended in Vienna on Friday. But as usual, they agreed to take most of the pain themselves, including a new 167,000 barrel-a-day drop in their quota and 400,000 barrels in additional output reductions. As a result, starting in January, Aramco will be producing about 9.7 million barrels a day, about 900,000 barrels a day less than a year ago.