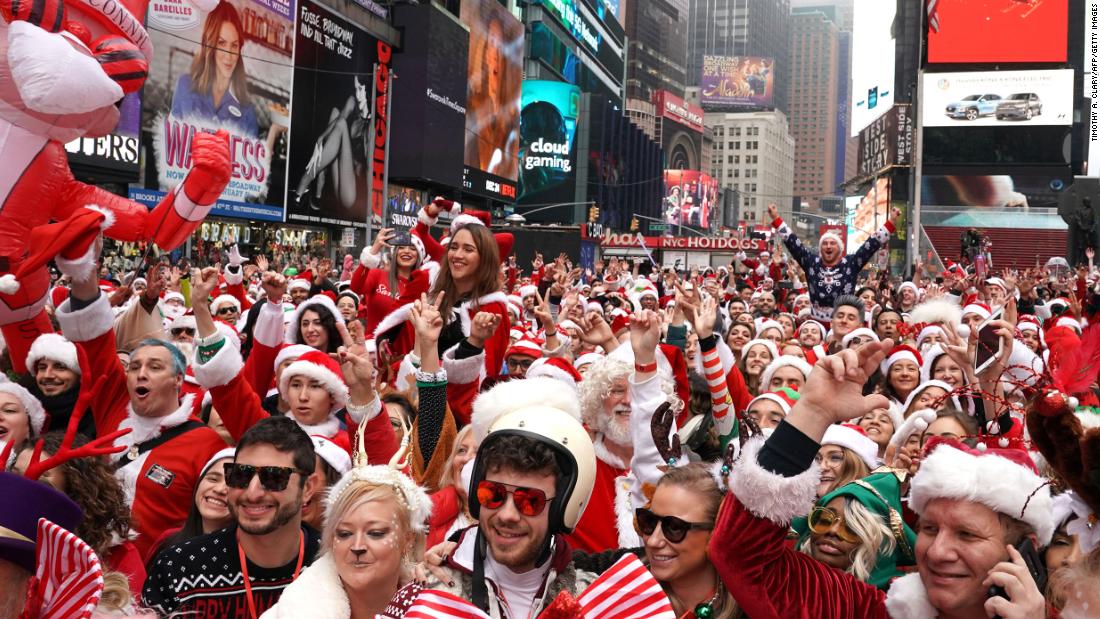 Welcome to SantaCon NYC, where thousands of Saint Nicks hit the streets of the Big Apple, donating to charitable causes while dressing up as Santa and visiting bars around the city.

SantaCon 2019 began at 10 a.m. on Saturday at Father Duffy Square, a section of Times Square, before the city’s jolly good fellows spread joy across town.

While most attendees dress up as Santa, many dressed as elves, reindeers, and other holiday-themed costumes.

The event is described by SantaCon as a “charitable, non-political, nonsensical Santa Claus convention that happens once a year to spread absurdist joy.”
Since SantaCon’s transition to a non-profit in 2012, the event has donated more than $400,000 to local charities.
The annual event began in 1994. New York SantaCon is the largest, but more than 300 similar events take place in more than 40 countries worldwide.
While SantaCon has already taken place on Saturday in many states and countries, including Maryland, San Francisco, Colorado, and Canada, the event is still making its way around the rest of the world.

SantaCon is supposed to spread happiness, but not all New Yorkers are reveling in the Christmas cheer.

“This is why New Yorkers can’t stand SantaCon,” Julia Salazar said on Twitter, posting a video of some noisy SantaCon revelers in a crowded subway car.
“Heads up NYC: the santacon people are already out,” Katie Nolan tweeted. “Grab what you need from the outside world and prepare to shelter in place.”
“Nothing brings New Yorkers together quite like our collective revulsion of #SantaCon,” another user said on Twitter.
“There have been times, over the years, that I’ve wondered about our family’s move out of NYC to New Jersey, what we’ve lost and what we’re missing,” John Schwartz tweeted. “Then SantaCon comes to town, and, you know what? I’m good.”
Category: News
Tag: CNN