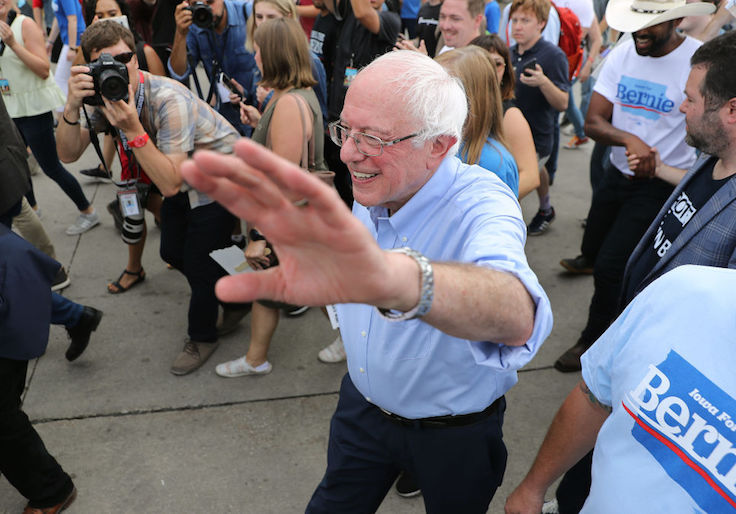 Sen. Bernie Sanders (I., Vt.) on Friday rescinded his endorsement of Cenk Uygur, the controversial Democrat running for Congress in California who has a history of offensive and sexist writing.

“As I said yesterday, Cenk has been a longtime fighter against the corrupt forces in our politics and he’s inspired people all across the country,” Sanders said in a statement. “I hear my grassroots supporters who were frustrated and understand their concerns. Cenk today said he is rejecting all endorsements for his campaign, and I retract my endorsement.”

An hour prior to Sanders’s announcement, Uygur also announced he would no longer be accepting or soliciting endorsements. He thanked Sanders and Rep. Ro Khanna (D., Calif.) for their support, saying it “took real courage in the face of the corporate media and Democratic establishment onslaught.”

“I want to be free of any influence other than the voters of CA-25. I will not be beholden to corporations, lobbyists, or special interest groups and I will not stand by while those groups attack my political allies,” Uygur added. “That’s why I have decided that I will not be accepting any endorsements.”

Sanders’s endorsement of Uygur described him as a voice we “desperately need in Congress.” But thanks to Uygur’s controversial history, the Vermont senator faced criticism from Democratic officials and activists.

“I understand that one reason [for the endorsement] is Cenk has been a good soldier and loyal to Sanders,” left-leaning journalist Jill Filipovic wrote on Twitter. “But I’m troubled by the suggestion that they align on the issues. Cenk is a misogynist and an anti-feminist! That should be disqualifying for any claim to being ‘progressive.'”

Filipovic and others were referring in part to Uygur’s past, explicit writing about his sexual expectations for the women he dates. When blog posts on the topic resurfaced in early 2017, he was ousted from the leadership of Justice Democrats PAC. Uygur apologized for the posts when they came to light, saying he was immature and “still a conservative who thought that stuff was politically incorrect and edgy” at the time of their writing.

Speaking out on the controversy Friday, Khanna said Sanders endorsed Uygur because of Uygur’s progressive policy positions, including his support for Medicare for All. Khanna also said Uygur “should be given a chance.”

Uygur is running to replace former Rep. Katie Hill (D.), who resigned after facing allegations that she had had affairs with staffers.