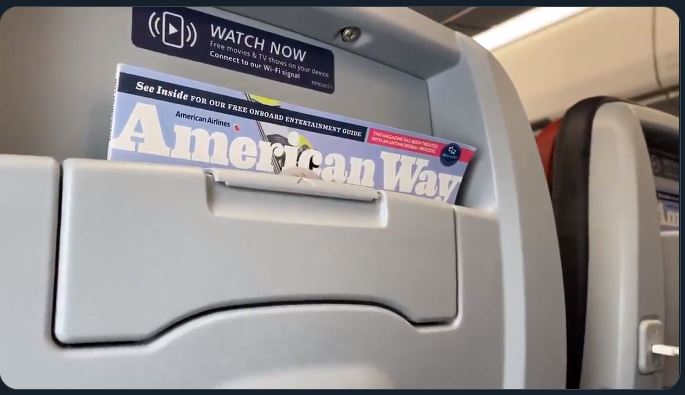 Raucous supporters of President Donald Trump reportedly disrupted several flights in and out of Washington D.C. this past week for protests that turned violent, prompting a pilot to threaten to “dump people off” and flight attendants demanding a ban on riot attendees.

An American Airlines pilot warned chanting passengers that he would land the plane and kick off the riled-up Trump supporters as they returned to Phoenix from Wednesday’s Capitol Hill riot. “This is going to be a four-and-a-half hour flight out to Phoenix. We’ll put this plane down in the middle of Kansas and dump people off. I don’t care,” the pilot told the unruly Trump backers. “We will do that, if that’s what it takes, so behave, please.”

According to video recorded on the Arizona-bound flight, people could be heard scoffing at the pilot’s loudspeaker remarks and yelling back: “Behave? What, are we in America?” Several passengers from the flight also badgered Republican Senator Lindsey Graham as a “piece of s***” inside Reagan National Airport near D.C. before taking off. One Trump supporter demanded to know why Graham was not auditing and overturning President-elect Joe Biden’s victory as security escorted him through the terminal.

Arizona resident Cliff Mansley, a passenger on the Phoenix-bound flight out of Washington, told ABC-15 he didn’t like that several fellow travelers heckled Graham in the airport before their flight departed.

“He deserves our respect and he was very respectful to me,” Mansley said, before detailing how ill-prepared Capitol Hill police were for the Wednesday protests which ultimately left five people dead. “I asked a police officer if I could cross the barrier that was on the ground and he shrugged his shoulders and said, ‘why not?’ They were totally unprepared. It almost seemed too easy for the crazy people who went up over the top,” Mansley told the local Arizona TV station.

A passenger on a third, separate flight from Indianapolis to Washington told Newsweek his sold-out plane was filled with Trump supporters who repeatedly refused flight attendants’ requests to keep their masks over their faces. Tony Mace, a D.C.-area resident and passenger aboard AA Flight 4886 said Saturday that “not one” of the dozens of Trump supporters en route to the Wednesday protests wore a mask inside the airport terminal.

Mace noted that most were “decked out in Trump gear or military clothing,” and three pro-Trump passengers were allowed to get on the plane without a mask.

Graham wasn’t the only Republican senator randomly accosted this week. On a flight from Salt Lake City to Washington, D.C., Utah Senator Mitt Romney was badgered by Trump supporters. Video recorded on the flight shows several people yelling “traitor” at Romney from several rows behind.

“We want to know your connections to Burisma and Joe Biden,” one woman yelled at Romney sitting a few rows ahead of multiple chanting passengers. “Your constituents want to know why you’re going to certify the Electoral College!”

Newsweek reached out to American Airlines for any additional remarks about the pro-Trump disruptions at airports and aboard flights across the country this week.

The air travel troubles stirred up by the Trump protesters resonated as the Association of Flight Attendants-CWA, the country’s largest flight attendant union, issued a statement that urged all U.S. airlines to prevent riot participants from hopping on future flights. Federal Aviation Administration (FAA) Administrator Dickson put out a statement on Saturday vowing to pursue “strong enforcement action” with penalties ranging from monetary fines to jail time.”

Dickson said the FAA tracks all commercial passenger flights and has “mechanisms in place for crew members to identify any number of safety and security concerns that may arise in flight. This includes unruly passenger behavior, which can distract, disrupt and threaten crewmembers’ ability to conduct their key safety functions.”

Trump himself had for weeks encouraged his most ardent supporters to stage “wild” protests in the nation’s capital this past Wednesday. This occurred as a group of 12 GOP senators unsuccessfully attempted to obstruct a final Electoral College count of Biden’s 306-232 victory over Trump.

PrevPreviousLongtime GOP Strategist Who Backed Trump Says The President Is ‘On His Own’
NextLearn guitar, piano, and drums (UK deal)Next