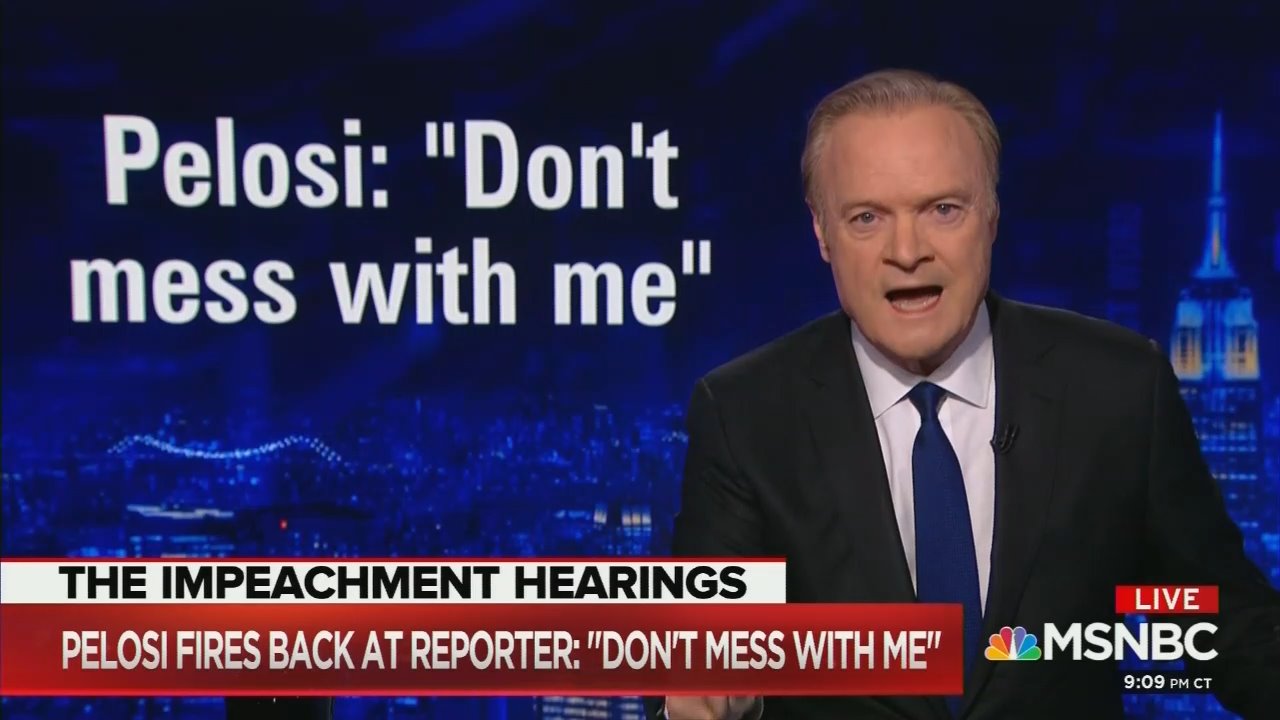 Just two months after showering House Speaker Nancy Pelosi with praise for rebuking the “child President” Trump, MSNBC’s Lawrence O’Donnell devoted another opening monologue to praising the Speaker; this time for her exchange with James Rosen. The Last Word host devoted the first ten minutes of his show Thursday to reporting on how Pelosi “crushed” Rosen after he dared to suggest that she might “hate the President.”

As he bantered with his colleague Rachel Maddow, O’Donnell began by proclaiming “I’m not someone who’s been tracking amazing things done by Nancy Pelosi over the years; but this year, she has really had a year.” O’Donnell himself compared Pelosi’s confrontation of Rosen to “that electrifying moment in the White House when she stood up to President Trump in the cabinet room.”

After Rosen asked Pelosi if she hated the President, the Speaker indignantly responded “I don’t hate…I was raised in a Catholic house. We don’t hate anybody.” For her part, Maddow agreed with O’Donnell’s analysis: “as a Catholic, seeing her invoke her Catholic faith in that moment at the apex of that confrontation was sort of a heart-stopping thing.”

As for O’Donnell, he seemed to enjoy the part where Pelosi told Rosen “don’t mess with me” the most. The phrase appeared in the background and on the chyron at the bottom of the screen as O’Donnell delivered his opening monologue.

O’Donnell also praised Pelosi for seizing the moment “as dramatically as any fiction writer could have provided for any fictional politician in a movie scene” before playing a clip of her “historic” announcement declaring that the House would move forward with articles of impeachment. The self-proclaimed “socialist” O’Donnell surely took pride in reporting that “Donald J. Trump will take his place in history as an impeached President.”

Shortly before playing a clip of the confrontation between Pelosi and Rosen, O’Donnell described the Sinclair reporter as someone “who spent almost as much time working at Fox News as disgraced sexual predator Bill O’Reilly” and trashed his current employer as “a much less prominent, right-wing, so-called news organization.” Less than an hour earlier, Pelosi herself used similar talking points with regards to Sinclair during a CNN town hall.

According to O’Donnell, Rosen “asked Nancy Pelosi the kind of question that would have made his former Fox boss, sexual predator Roger Ailes, very, very proud.”

A transcript of the relevant portion of Thursday’s edition of The Last Word is below. Click “expand” to read more.

The Last Word With Lawrence O’Donnell

LAWRENCE O’DONNELL: We are going to begin tonight with yet another amazing thing that Nancy Pelosi has done. And I…and I’m not someone who’s been tracking amazing things done by Nancy Pelosi over the years; but this year, she has had a year. She has really had some moments, and this is one that…that you didn’t have room to include in your hour in that press conference, you know, when she was leaving the room.

O’DONNELL: And she did that turn around on a reporter who yelled out something that he should not have yelled out at Nancy Pelosi when she was leaving that room. We’re…we’re going to show that full drama as it plays out. And…and I’m once again just stunned by how she handled it. It’s…it’s an unscripted moment, so, it…it’s…she had no idea it was coming. It was like that moment in the White House when she stood up to President Trump in the cabinet room; unscripted moment. It was provoked by the situation. And it…and it…it’s just something that…it feels like only she can do this.

MADDOW: Yes, and it was sort of an indelible moment. And I will say as a Catholic, seeing her invoke her Catholic faith in that moment at the apex of that confrontation was sort of a heart stopping thing.

O’DONNELL: Well, as I was just saying to Rachel, Nancy Pelosi did it again today. It was like that electrifying moment where she literally stood up to Donald Trump in the cabinet room. It was unscripted. It was provoked by someone else, but she seized the moment; as dramatically as any fiction writer could have provided for any fictional politician in a movie scene. And I am sure that she got a silent cheer from some people working at Fox News today when she did that. And she did that after making history first thing this morning. And we begin tonight with that history. We begin tonight with an historic statement by the Speaker of the House.

O’DONNELL: And with that, Nancy Pelosi guaranteed that Donald Trump will be the third President of the United States impeached by the House of Representatives. The House Judiciary Committee will write and vote on articles of impeachment. Those articles of impeachment will pass in the committee and then be voted on by the full House of Representatives and some or all of the articles of impeachment will pass the House of Representatives, and Donald J. Trump will take his place in history as an impeached President. We don’t yet know the exact timetable for all of that, but it could happen before Christmas. The House Judiciary Committee has its next impeachment hearing scheduled for Monday, when they will consider the evidence in the House Intelligence Committee’s written report of its impeachment investigation of the President’s solicitation of help in his re-election campaign from the President of Ukraine by asking the President of Ukraine to investigate Joe Biden.

After making her historic announcement this morning, the Speaker of the House went about her regular duties including conducting, later, her regularly scheduled press conference about House of Representatives business in which she discussed the 275 bills that she has passed through the House of Representatives with bipartisan votes that are all now on Mitch McConnell’s desk in the United States Senate; where he is ignoring them and refusing to allow them to come to a vote. And then, when the Speaker was leaving that press conference, a reporter decided to shout out a question. The reporter is James Rosen, who spent almost as much time working at Fox News as disgraced sexual predator Bill O’Reilly and who left Fox News, according to The New York Times, “after the network began scrutinizing sexual misconduct allegations against him.” James Rosen now works for a much less prominent right-wing so-called news organization. And he asked Nancy Pelosi the kind of question that would have made his former Fox boss, sexual predator Roger Ailes, very, very proud.

James Rosen cowered in that stunned silence and did not dare throw the word “hate” at Nancy Pelosi again after she crushed him in front of every other Capitol Hill reporter. And now the millions of people who have watched James Rosen get crushed in that video. Like so much that Nancy Pelosi does in her unscripted bursts of eloquent moral indignation, this one was multi-dimensional. There she was standing up against hatred; as her Catholic religion has taught her to do since she was a little girl.