MAGA-Powered Parler Is Down After Amazon Cancels Its Web Hosting Services – Reason.com 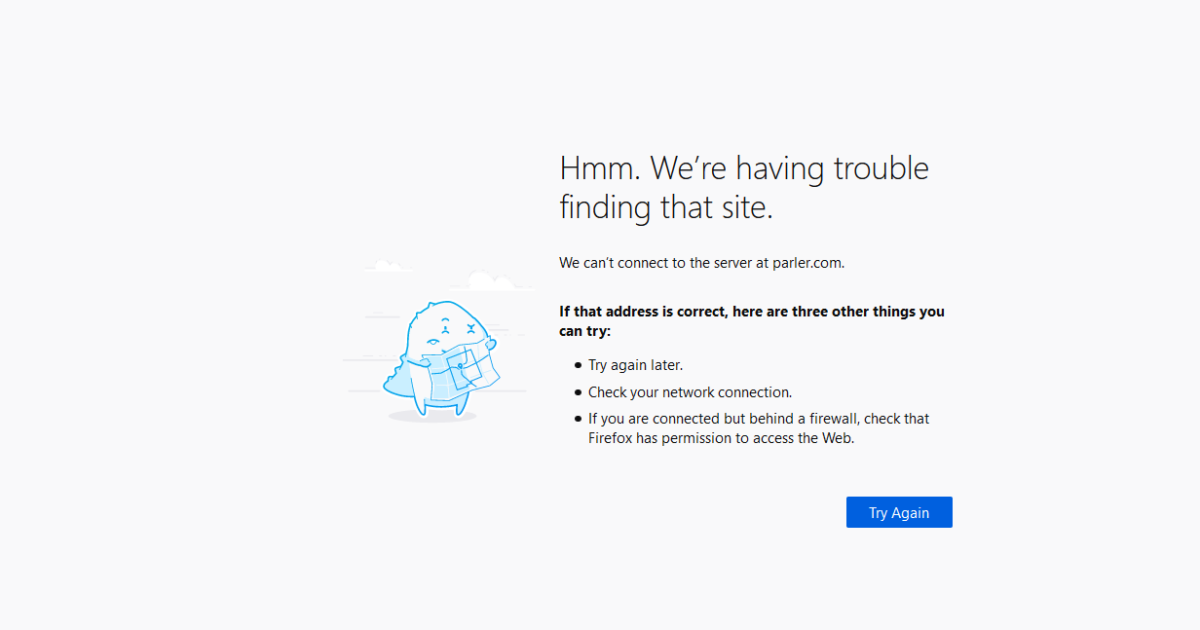 Parler may “be unavailable on the internet for up to a week as we rebuild from scratch,” wrote CEO John Matze in a statement. “We will try our best to move to a new provider right now as we have many competing for our business.”

Matze called it a coordinated attack by Apple, Amazon, and Google “to kill competition in the market place.” He added that “you can expect the war on competition and free speech to continue, but don’t count us out.”

Parler isn’t really a competitor for Apple, Amazon, or Google, and Parler’s head displays a fuzzy conception of free markets if he thinks it means big tech companies must contract with apps and businesses they don’t wish to, for whatever reason.

But Matze isn’t wrong that something here stinks.

Plenty of digital platforms—including those much bigger and more mainstream than Parler—provide a place for conspiracy theorists, MAGA riot organizers, and threats of violence, as well as the politicians who back and encourage these forces. To take action against Parler and no other social media sites or web forums—and to do it so swiftly, without providing them with a little buffer to find new options—feels like the Amazon/Apple/Google version of Twitter and Facebook suddenly banning Trump’s accounts and deleting his post history. It’s a big, high-profile move in the midst of inflamed passions and threats of legal action that feels more designed to stave off becoming a target themselves.

It’s not a First Amendment issue, of course, and it’s perfectly within Apple’s, Google’s, and Amazon’s rights as private companies to make these choices. But it also looks a lot like they’re making Parler a sacrificial lamb to political pressure to do something about people talking too uncontrollably online.

Actionable threats and harassment needn’t be ignored, but we should focus on the folks behind those threats, not aim to take down whole ancillary reams of speech and content to punish a minority of lawbreakers.

Incidentally, this provides the anti-Section 230 crowd with a better glimpse of what a world without Section 230 would look like all the time, not just in the wake of incidents that rattle us. Nobody would want to even tangentially do business with apps and other web forums that don’t aggressively police and limit user speech, for fear that liability would work its way up the food chain to them.

(One of the first civil lawsuits under the 2018 law FOSTA, which took aim at Section 230 and online ads for sex work, was against Mailchimp for letting an adult ad website sign up for an account and send emails.)

Parler was painted as a broadly conservative answer to Twitter, a place where free speech reigned. In reality, it attracted a certain strain of conservatism—that which worshiped President Donald Trump and often trafficked in wild conspiracy theories—and quickly started running into issues between its original “anything goes” ethos and the demands of moderating a major platform. But for all its flaws, it doesn’t deserve its current fate as a tech scapegoat for last week’s attack on the U.S. Capitol.

Some quotes from my interview yesterday with @RepMeijer, the young anti-war vet and Republican who succeeded @JustinAmash in Congress. https://t.co/x5pQmzafIr

PrevPrevious‘Your move, Mr President’: North Korea sets the stage for Biden
NextPelosi: Trump running again for office ‘one of the motivations’ for impeachmentNext