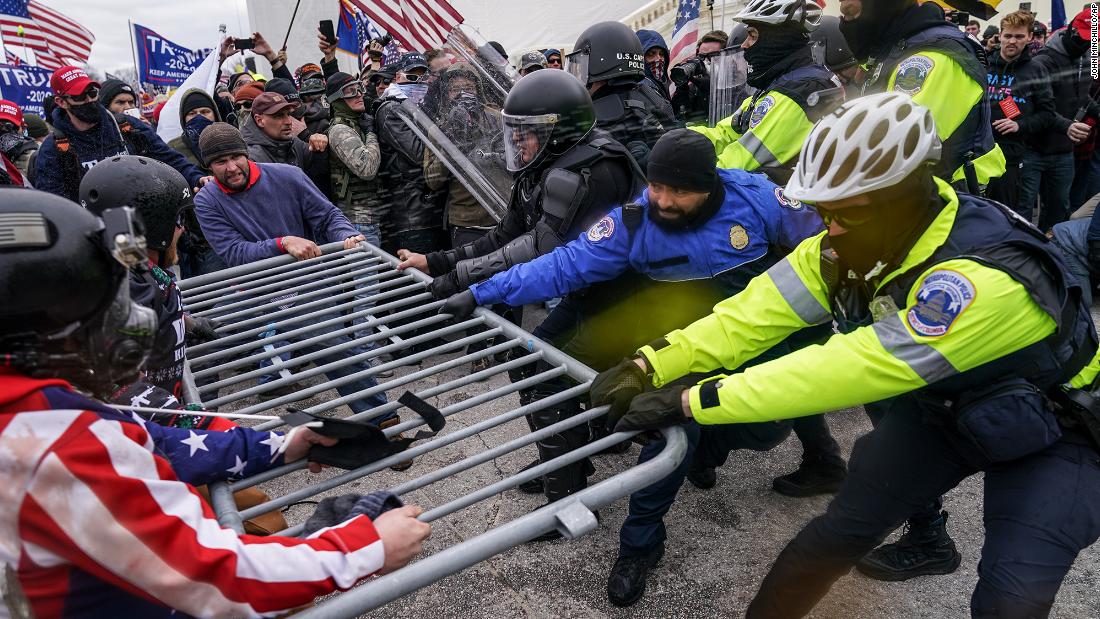 Authorities are preparing for additional personnel to help secure the nation’s capital in the coming days. A Department of Homeland Security official told CNN that the breach of the Capitol will sharpen the response and planning for inauguration.

At the Capitol Police’s request, DHS helped install fencing, which was seen going up around Capitol Hill Thursday.

At the Pentagon, officials are assessing whether there is a need to bolster the number of National Guard forces to as many as 13,000 guardsmen for President-elect Joe Biden’s inauguration, according to a defense official with knowledge of the planning. Prior to the US Capitol breach, the estimated need called for approximately 7,000 guard troops.

More than 6,000 members have already been mobilized in the wake of the Capitol being stormed by pro-Trump rioters to work in 12-hour shifts on Capitol grounds and work traffic control points throughout the city.

At the state level, security officials have been working closely with federal partners as they prepare for increasing online chatter calling for protests in all 50 states, plus Washington, DC, said one state law enforcement official with direct knowledge of conversations between federal and state partners.

Plans for future armed protests, including a proposed secondary attack on the US Capitol and state capitol buildings on January 17, began proliferating on and off Twitter last week, the social media company said.
Still, extremism experts are fearful of what will happen on and around January 20 when Biden is sworn into office, given surging calls for violence as many extremists see the Capitol incursion as a success.

“Trump WILL be sworn in for a second term on January 20th!!,” said a commenter on thedonald.win, a pro-Trump online forum, on Thursday, the day after the siege. “We must not let the communists win. Even if we have to burn DC to the ground.”

In response to Wednesday’s security breach at the Capitol, authorities have arrested dozens of people connected to the unrest after pro-Trump rioters charged through barricades, assaulted police officers and shattered windows.

The president’s supporters were in Washington, DC, to protest Trump’s election loss in response to Trump and his surrogates urging his supporters to fight against the ceremonial counting of electoral votes that confirmed Biden’s win.

“Law enforcement was ill prepared for an event the entire country knew was coming, and one that POTUS had been signaling for weeks,” said Brian Harrell, former DHS assistant secretary for infrastructure protection. “The normal ‘layers of security’, with each inner layer being tougher to breach, was nearly non-existent. It’s shocking, that in a post 9/11 world, we witnessed the ‘people’s house’ be breached and ransacked with ease.”

Layers of security, standoff distancing and tactical teams on standby will be used to minimize violence near the inaugural events, he said, adding that the biggest concerns should be an active shooter scenario, vehicle ramming and the deliberate targeting of critical infrastructure.

In light of the week’s events, Bowser asked the Trump administration for an emergency declaration for DC and called on the Department of Homeland Security to extend their preparations. Intelligence suggesting further violence is likely during the Inaugural period, she wrote in a letter to Trump Sunday.

“I will tell you that given the events of this last week that this inauguration preparation has to be different than any other inauguration,” Bowser said in an interview with CBS’ “Face the Nation” on Sunday.

The Mayor asked DHS to extend the “National Special Security Event” period from January 11 to 24 in a letter to acting Homeland Security Secretary Chad Wolf — an extension of the original plan from January 19 to 21.

The inauguration is designated as a National Special Security Event, which allows for greater federal security cooperation and law enforcement resources.

Additionally, Bowser asked Wolf for DHS to cooperate with the Department of Defense, Congress and the Supreme Court to establish a security perimeter with federal forces around federal property, freeing up the local Metropolitan Police Department to focus on its normal city duties.

Bowser added that DC regularly works with federal partners on intelligence sharing but will work to improve that relationship ahead of the inauguration.

DHS’ second-in-command, Ken Cuccinelli, said that Wednesday’s violence would be a “one time event,” and assured Americans that Inauguration Day would be safe.

“You’re going to see immediate improvement, fully aggressive posture by the Department of Homeland Security and the Department of Justice as well, because we accept violence from no one,” he said in an interview on Fox News Thursday.

On Wednesday, the Capitol Police asked for additional law enforcement help from DHS, but by the time the request was made, “it was just too close to when everything began to heat up,” Cuccinelli said.

The threat of more violence

Experts warn that the calls for violence, which circulated ahead of Wednesday’s siege of the Capitol, have intensified ahead of Inauguration Day. Twitter said it was tracking the latest plans for armed protests when it announced the permanent suspension of Trump’s account on Friday.

White supremacists and far-right extremists feel emboldened in this moment, said Jonathan Greenblatt, the CEO of the Anti-Defamation League, which tracks and counters hate. “We fully expect that this violence could actually get worse before it gets better.”

A former DHS official told CNN that from the perspective of extremists, the purpose of an attack like last week’s is not necessarily to destroy the Capitol. “It’s to show that a relatively small number of people can actually take over the system. It’s supposed to be a rallying cry for — ‘join us, or you are now the enemy.'”

The former official pointed to images of members of the White power movement amid the crowd during the storming of the Capitol, adding that they were exploiting the election protest for their own purposes.

“We could start to see a lot of lives lost because of the moment that occurred on Wednesday, so very, very concerned about the cascading effects,” the former official said. “It’s a very concerning moment.”

Protests happening around the country

Outside of Washington, DC, local authorities have also had to grapple with threats and increased security needs.

On Saturday afternoon, an unlawful assembly was declared in San Diego after protesters clashed and threw objects at police officers. According to tweets from the San Diego Police Department, protesters threw rocks, bottles and eggs at officers shortly after they were asked to leave the area. The tweets also said that pepper spray was being dispersed from the crowd toward the officers.

The unlawful assembly was declared about an hour and a half after the pro-Trump and counter protesters gathered near the beach, according to CNN affiliate KGTV.

On the same day as the siege in Washington, DC, the Texas State Capitol building and grounds were closed to the public “out of an abundance of caution,” according to a statement from the Texas Department of Public Safety. Protesters took to the Capitol grounds after an “Operation Occupy The Capitol Texas” event was created on Facebook.

Washington State Democratic Gov. Jay Inslee announced Friday that he was mobilizing up to 750 members of the National Guard to provide security for the beginning of the state’s legislative session, which starts Monday.

“The actions we saw in both Washington, D.C. and Olympia earlier this week were completely unacceptable and will not be repeated in our state again,” Inslee said in a written statement.

Protesters occupied the steps of the state Capitol on Wednesday, and dozens of people broke through the outer grounds of the governor’s mansion before being peacefully turned back by state troopers.

“In light of the most recent insurrection activity, the state cannot tolerate any actions that could result in harm, mayhem or interruption of function of democratic institutions,” Inslee said Friday evening. In addition to Guardsmen, the governor says a “large number of Washington State Patrol troopers will be on hand.”

“Some of the online rhetoric has called for protests at all 50 capitols plus DC,” the official said. “FBI in particular has been continuing to put our threat assessments and we are at the state level as well.”

“I think DC Is bracing for large scale protests and potential violence,” the official said, adding that briefings state officials have received “have outlined a much larger scale prevention and response to minimize a recurrence of last Wednesday.”