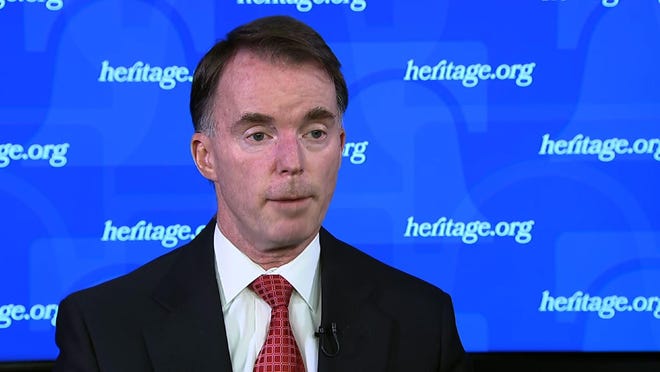 PENSACOLA, Fla. — The Saudi national accused in last week’s deadly shooting rampage in a Naval Air Station classroomhere hosted a dinner party days before the carnage at which he and three guests viewed videos of mass shootings, authorities say.

The Associated Press, the first media outlet to report on the gathering, said one of the three students who attended the dinner party later recorded video outside the building while the shooting was taking place. Two other Saudi students watched from a car, AP said, citing a U.S. official it did not name.

The New York Times, citing a person briefed on the investigation, said the student who recorded the video later told investigators he just happened to be in the area when the shooting took place.

Ten Saudi students were being detained on base and several others were unaccounted for, said AP, citing a U.S. official who spoke on condition of anonymity after being briefed by federal authorities.

Secretary of State Mike Pompeo said Saturday that Saudi Arabia’s foreign minister, “expressed his condolences and sadness” for the attack. The murders in Florida come at an already tense time in U.S.-Saudi relations following the Saudi role in the 2018 slaying of Jamal Khashoggi, a U.S. resident and Washington Post journalist

Acting Secretary of Defense Mark Esper said authorities are still trying determine whether the shooter acted alone and whether the attack was an act of terrorism. Esper also said he had ordered a review of the Department of Defense’s security and vetting policies.

“This was a planned terrorist attack and the shooter wasn’t alone,” Gaetz said.

Sen. Rick Scott, R-Fla., told Fox News that he had heard reports that not all the Saudi airmen were speaking with the FBI.

“I mean, if the Saudi government is our ally and our partner, they will make sure that there is full cooperation,” Scott said. “Not one airmen needs to leave this country” until the investigation is completed.

Hours before the Pensacola shooting, tweets purportedly written by the suspect railed against the United States for its support of Israel and for stationing troops at bases in Saudi Arabia. The FBI said it is working to confirm that tweets came from the Saudi military trainee.

The tweets are addressed to “O American people” and outline what the author said is a hatred of the United States for crimes against Muslims, including the detention of suspects in Guantanamo Bay.

Rita Katz, director of the U.S.-based SITE intelligence group that tracks jihadist activity, said the now-deleted Twitter account was created in 2012 and amasses over 2,700 tweets. The tweets did not claim allegiance to any group, but they echoed the core views of Osama bin Laden in calling for support of Palestine and the departure of U.S. troops from bases in Saudi Arabia, Katz tweeted.

“We have no reason to believe it is not his,” Katz said. “What is important to emphasize is the preventability of the attack. Investigation into social media profiles must be a part of the vetting process. Current carte-blanche U.S. policies restricting travel from Muslim-majority countries are ineffective and create more fodder for ISIS and Al Qaeda campaigns.”

Alshamrani was one of 852 Saudi nationals in the United States training under the Pentagon’s security cooperation agreement with the Kingdom of Saudi Arabia.

An undisclosed number of people were being interviewed, according to people familiar with the matter. They cautioned that the inquiry was still in its early stages, declining to elaborate on whether any of those interviewed were considered as any more than witnesses.

The shooter began his three-year course at the base in August 2017 with English, basic aviation and initial pilot training, said the officials, who were not authorized to speak publicly because of the ongoing investigation.