‘It’s all fallen apart’: Newsom scrambles to save California — and his career 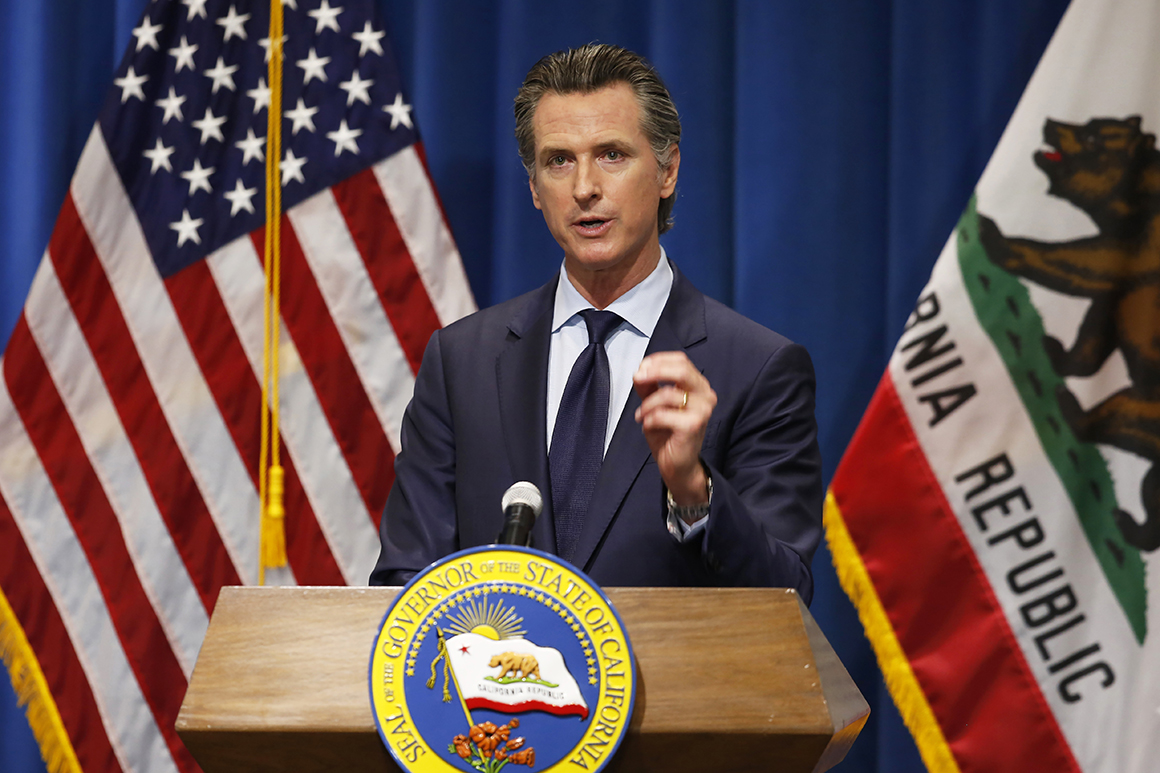 Halfway through his first term, the Democratic governor of the nation’s most populous state is scrambling to control a pandemic that has crippled the southern half of California since Thanksgiving. The pandemic has given Republicans, long sidelined in this heavily Democratic state, a rare opportunity to wound him. And Newsom is laboring to keep the state — and his own political future — intact.

“People are really pissed off,” said Ted Costa, the anti-tax crusader who was the original proponent of the Davis recall. He signed Newsom recall papers last week in the parking lot of a Home Depot in Thousand Oaks. “Things can get hot quick, and I don’t know if Newsom realizes what happens when a groundswell hits.”

For Newsom, an ambitious Democrat with a national profile, the extent of the problem is unclear. The last Republican to win a gubernatorial election in California was Arnold Schwarzenegger, and that was nearly 15 years ago. When Newsom won the governorship in 2018, he carried the state by nearly 24 percentage points. His public approval rating last year stood at 60 percent.

Yet the pandemic has worsened in recent weeks. And the frame of reference through which Californians view Newsom is about to change dramatically when Joe Biden replaces Donald Trump in the White House. No longer benefiting from a reliable foil in Washington, the bar of public approval for Newsom — and for Democratic governors across the country — is likely to be raised.

“For the last couple of years during Newsom’s tenure, people have been saying the nation’s going in the wrong direction and the state, compared to the nation, is going in the right direction,” said Mark Baldassare, a veteran pollster and president of the Public Policy Institute of California. Now, without a Republican president to judge Newsom against, he said, “It certainly changes that point of contrast.”

Newsom has met the surging virus and its economic fallout with a series of proposals intended to help the most vulnerable Californians and to get schoolchildren back into classrooms. Last month, he proposed a $2 billion effort to reopen elementary schools for the state’s youngest students, with additional protective equipment and testing. Earlier last week, Newsom proposed giving the state’s low-income workers $600 “rapid cash” grants. And in a boon for his political fortunes, the state’s budget, despite dire predictions, is so healthy that Newsom released a budget proposal on Friday that calls for record spending while adding billions of dollars to the state’s reserve accounts.

But good news has been rare in California, and Newsom has not been without blunders. He came in for a drubbing after attending a dinner party for a top political adviser at the upscale restaurant The French Laundry — a liability not only because Newsom enjoyed his night out as he was discouraging Californians from gathering for the holidays, but because the location was so posh. Californians who might otherwise have stopped mocking him for that episode weeks ago have only had more reason for frustration amid the pandemic’s worsening conditions.

“In the city of Los Angeles and in our county, Covid-19 is now everywhere and infecting more people than ever,” the city’s mayor, Eric Garcetti, said at a grim news conference on Thursday night.

“I don’t think Californians can understand why we have hundreds of thousands of doses sitting there, and they’re not being administered,’’ said Garry South, a Democratic strategist who advised Newsom’s 2010 gubernatorial campaign and was a senior adviser to Davis. “California’s been through nearly 10 months of hell, and now there’s potentially a light at the end of tunnel with these vaccines — but it doesn’t do anybody any good if they’re not administered.”

“You’ve got to get these vaccinations in people’s arms,” he said.

Like other Democrats, Newsom has faulted the Trump administration for the slow vaccine rollout, joining the Democratic governors of seven other states last week in pressing federal health officials to release more doses. And in the new administration in Washington, Newsom will have some help. California Secretary of State Alex Padilla, who this month will be sworn in to fill the seat of Vice President-elect Kamala Harris, said in an interview that he plans make “Covid, Covid, Covid” his top priority — and will work immediately to get Newsom whatever help he needs.

At the federal level, Padilla said, “We know that vaccines have been approved, but we’re still nowhere near where we need to be in terms of the volume of production.”

For Newsom’s political purposes, the sooner the better. For years, Republicans’ messaging on taxes, regulations and social issues has fallen flat in gubernatorial politics here, a reflection of California’s overwhelmingly Democratic electorate. But the coronavirus has come as a bonanza for Newsom’s critics, providing an opening for anti-Newsom broadsides that might resonate beyond the Republican Party’s base.

“In the midst of this pandemic, with so many people hurting and now out of work, … we have 500,000 Californians that can’t get an unemployment check,” said former San Diego Mayor Kevin Faulconer, who this week launched a gubernatorial exploratory committee. “How many parents are frustrated, when they look to see that the majority of private schools are up and running and operated and yet we haven’t been able to safely reopen our public schools? That’s unacceptable.”

He and other Republicans have been casting Newsom as directionless on pandemic — a narrative that has been assisted by the increase in cases despite restrictions. “Look, all we heard — all year long — from Gavin Newsom was that once we have the vaccine, all problems will be solved, the lockdowns will end and we can get back to normal life here in California,’’ said Jennifer Kerns, a conservative talk show host and former state GOP spokesperson. “And that’s not been the case.”

Joe Rodota, a former Republican strategist who left the party due to Trump’s influence and once served as deputy chief of staff to former Gov. Pete Wilson, said, “It’s all fallen apart.”

Against that backdrop, the push to recall Newsom has been gaining steam. Though recall efforts are mounted routinely against governors and rarely qualify for the ballot, proponents of the anti-Newsom effort said Tuesday that they had surpassed 1 million signatures — about two-thirds of the number they need to force an election later this year — in part by soliciting signatures by mail from Republicans and independent voters. The effort drew a $500,000 donation recently from an Orange County donor who objected to Newsom’s orders limiting religious gatherings due to the coronavirus.

Dave Gilliard, the Republican strategist who helped orchestrate Davis’ recall in 2003 and is advising the Newsom recall effort, put the odds of qualifying for the ballot at about 80 to 85 percent.

“It’s really taken off in the last couple of months,” he said, attributing the increase to what he called “the French Laundry surge.”

Newsom’s advisers are paying attention to the recall effort, doing interviews and casting the recall proponents as “pro-Trump extremists.” Dan Newman, Newsom’s chief political adviser, said “the recall effort is primarily fueled by the same hatred, misinformation and lack of respect for democracy that led domestic terrorists to storm the Capitol.”

But Newsom’s advisers are not advertising or holding press conferences, privately disinclined to give air to an initiative they believe is unlikely to qualify without a significant infusion of additional money. Proponents of the recall need to collect roughly 1.5 million signatures by March; ensuring they have enough valid signatures means they will likely need to collect far more than that number.

And if the recall initiative does qualify for the ballot, actually recalling Newsom will be a much taller task. Republicans make up less than a quarter of California’s electorate. And by the time of any recall election, which would not come until months after signatures are submitted, the mood of voters — by then potentially vaccinated — may dramatically improve.

For now, Davis said he expects Newsom to focus heavily on promoting the vaccine, which he said should “give people the sense that this pandemic is eventually going to end.” And overall, given the challenges of the pandemic, Davis said Newsom has “done a remarkable job.”

“There’s a reason why his public approval ratings are still in the mid- to high-50s,” Davis said. “He’s totally transparent. He explains why he’s going to do something. He tells you whether it was accomplished and, if not, why not. And I think there’s an endearing quality about him that voters like.”