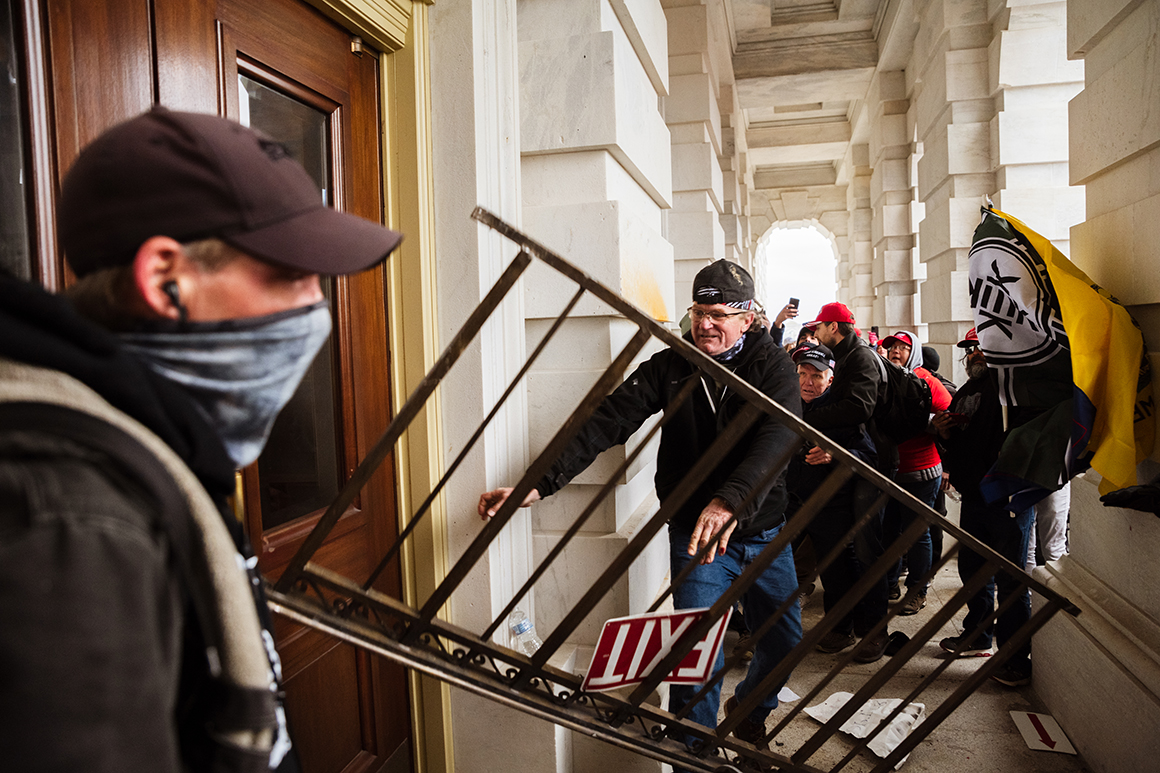 Rep. Steven Horsford (D-Nev.) told his colleagues he thought the riots were “an inside job,” according to two lawmakers on the call.

House Majority Whip Jim Clyburn (D-S.C.) mentioned that looters had found their way to his unmarked, third floor office and stole his iPad. He questioned how they could locate that office but not his clearly marked ceremonial office in Statuary Hall. Later, another Democrat on the call, Rep. Linda Sanchez (D-Calif.) specifically raised the question of possible collusion among some Capitol Police officers, according to several people listening.

In that vein, House Financial Services Chair Maxine Waters (D-Calif.) told a radio station that Democrats didn’t know yet if the failures by Capitol Police were the result of “poor planning or whether it was because there was certain kinds of infiltration.”

A Capitol Police spokesperson did not immediately respond to a request for comment.

Some of the most acute concerns have been raised by members of color, many of whom have already faced an increase in personal threats during the Trump era and had raised early warnings that the Trump supporters’ planned Jan. 6 demonstration could turn violent. Those members also expressed outrage at the disparity in treatment of pro-Trump rioters, many of whom were allowed to walk free from the Capitol even after ransacking congressional leaders’ offices, and at the crackdown on demonstrators protesting racial inequality over the summer.

“If the ‘protesters’ were Black they would have been shot with rubber bullets, tear gassed, and killed,” said Rep. Bennie Thompson (D-Miss.), chair of the House Homeland Security Committee on Wednesday.

“Police do not take white, right-wing protesters as seriously and they don’t treat them as a threat in the way they treat African Americans, Latinos and other groups,” Rep. Joaquin Castro (D-Texas) said in an interview. “And I think we saw the consequence of that this week.”

Since Wednesday’s attack, many Democrats have publicly and privately raised alarms about the ease with which rioters were able to not only enter the building but also quickly find their targets in a complex that is difficult for even members of Congress to navigate.

“Somebody must get to the bottom of how they, with such efficiency and such alacrity, moved themselves in mobs into [Speaker Nancy Pelosi’s] office. Into the whip’s third-floor office,” said Rep. Madeleine Dean (D-Pa.), one of the dozen or so Democrats who was locked inside the House chamber as rioters attempted to break in.

“We all joke about the fact that it’s so hard to find some of these offices, and we work in the building,” Dean said in an interview.

One of the pro-Trump rioters told The New York Times that a Capitol Police officer directed them to Senate Democratic Leader Chuck Schumer’s office.

Democrats have vowed to investigate all aspects of the assault on the Capitol — Clyburn said on the call that it would take a 9/11 Commission-style investigation — including about the actions of Capitol Police captured on video.

“I saw those videos,” Rep. Tim Ryan (D-Ohio) told reporters Friday. “You had people fighting their hearts out and getting hit over the head with a lead pipe … and you had people taking selfies with these terrorists. So there are all of these different levels and we will be examining all of the footage.”

Rep. Zoe Lofgren (D-Calif.) chair of the House committee that oversees Capitol security matters, similarly noted that at least some officers may have “taken selfies with these seditionists or even let them in.”

“We need to thoroughly investigate that,” she said.

Democrats are already enraged at the leadership of the Capitol Police for their handling of the security situation. Lofgren said Thursday that the USCP’s chief, Steven Sund, misled her about the resources it had available to protect lawmakers and Vice President Mike Pence, who was in the Capitol for the ceremony to count Electoral College votes. Sund resigned from his post Thursday.

Lofgren said she had pressed Sund about the National Guard’s readiness for possible protests and he assured her they were activated should they be needed.

“What they told me about the National Guard was just not true. The Guard was not even activated,” she said.

Rep. Anthony Brown (D-Md.) said an independent oversight board needed to be put in place for the Capitol Police force.

“The Capitol Police are probably the only law enforcement agency I can think of that does not have non-uniform civilian oversight,” Brown, who was sheltering in his office during the breach, said in an interview Friday. “That’s a problem.”