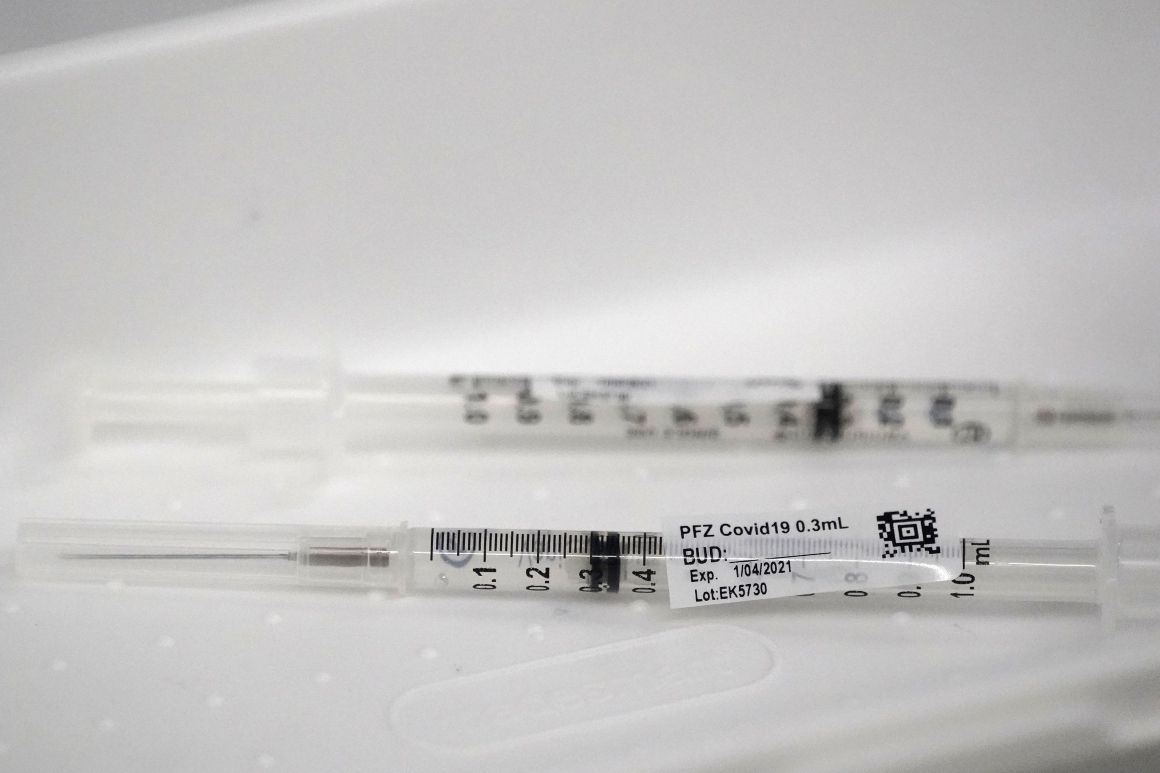 But some syringes distributed by Operation Warp Speed, the federal Covid-19 vaccine program, aren’t efficient enough to extract a sixth dose, according to hospital lobbyists. They say the issue appears to stem from supply chain problems that have troubled the nation’s pandemic response from the start.

In the meantime, some hospitals are worried they won’t have enough vaccine to give a second dose to everyone they’ve inoculated so far — since the Pfizer vaccine is given as two shots weeks apart.

Federal officials acknowledged to POLITICO they are aware of the syringe problem. “Operation Warp Speed is quickly evaluating options to reconfigure the accompanying ancillary supply kits to accommodate the potential additional doses,” according to a Department of Health and Human Services spokesperson.

HHS did not respond to a question about whether its decision to ship out less-efficient syringes was related to supply chain issues.

Low dead-volume syringes are designed to leave less vaccine trapped between the syringe’s plunger and needle — the “dead volume” — once a shot is given. But the number of doses that a health care worker gets out of one multidose vial is also influenced by the technique that the provider uses, the HHS spokesperson said.

The kits provided by the federal government ensure health care workers have the supplies they need to administer shots into Americans’ arms, and that the supplies are free to providers.

Some health care providers have alerted their state officials to the syringe problem, said Claire Hannan, the head of the Association of Immunization Managers. And hospitals have raised the issue to the American Hospital Association, the federal lobby representing about 5,000 hospitals nationwide.

The issue comes amid a slow start for the U.S. inoculation effort, which failed to meet Warp Speed’s initial goal of vaccinating 20 million people by the end of 2020. Roughly 6.7 million people had received one of two authorized vaccines — Pfizer’s or one from Moderna — as of Friday, even though the federal government had by that point distributed just over 22 million doses.

Nancy Foster, the AHA’s vice president of quality and patient safety policy, said the mix of different syringes is raising questions about the ability to deliver a second dose to everyone who’s gotten a first shot.

“With the second dose of Pfizer that is now going into people’s arms, we’ve been given different syringes, less efficient, so you need to draw up a little bit of extra vaccine, to get the right amount of dose into the person’s arm,” Foster said. “We don’t have that sixth dose now.”

Pfizer ships its vaccine in trays of 195 vials — each designed to contain five doses. Hospitals that squeezed out the extra doses initially were able to vaccinate an extra 195 people per container of the Pfizer shot, Foster said. Now they need to make sure they can administer the second round of shots.

But Mitchel Rothholz, the immunization policy lead for the American Pharmacists Association, said that ensuring second doses for everyone who’s been vaccinated so far should not be difficult. That’s because the number of second, or booster, shots that are sent to vaccination sites are based on the number of initial inoculations at each site.

“The way they’re tracking is not by the vials, it’s by the doses given,” Rothholz said.

At least one state vaccine coordinator confirmed that Warp Speed has been shipping out a variety of syringe types since the inoculations began in December.

“Having seen all of the ancillary kits from the beginning as well as across an entire state, there has been a mixture of syringe types across the operation,” said Krista Capehart, the director of regulatory affairs for West Virginia’s Board of Pharmacy and designer of the state’s distribution plan.

She confirmed that one syringe type is “more routinely able to get the sixth dose,” and the other is less likely to.

Rothholz said his group is looking into it — but they aren’t sure if the problem is the technique that providers have been using to draw doses out of the vial or with the type of syringes they are using.

“We’re exploring more about it,” Rothholz said, adding his group is planning to reach out to the Food and Drug Administration. “We’ve asked our members.”

PrevPreviousJ.Lo Really Wants Me to Look Good, But I Just Can’t Face It
NextHow Parler, a Chosen App of Trump Fans, Became a Test of Free SpeechNext