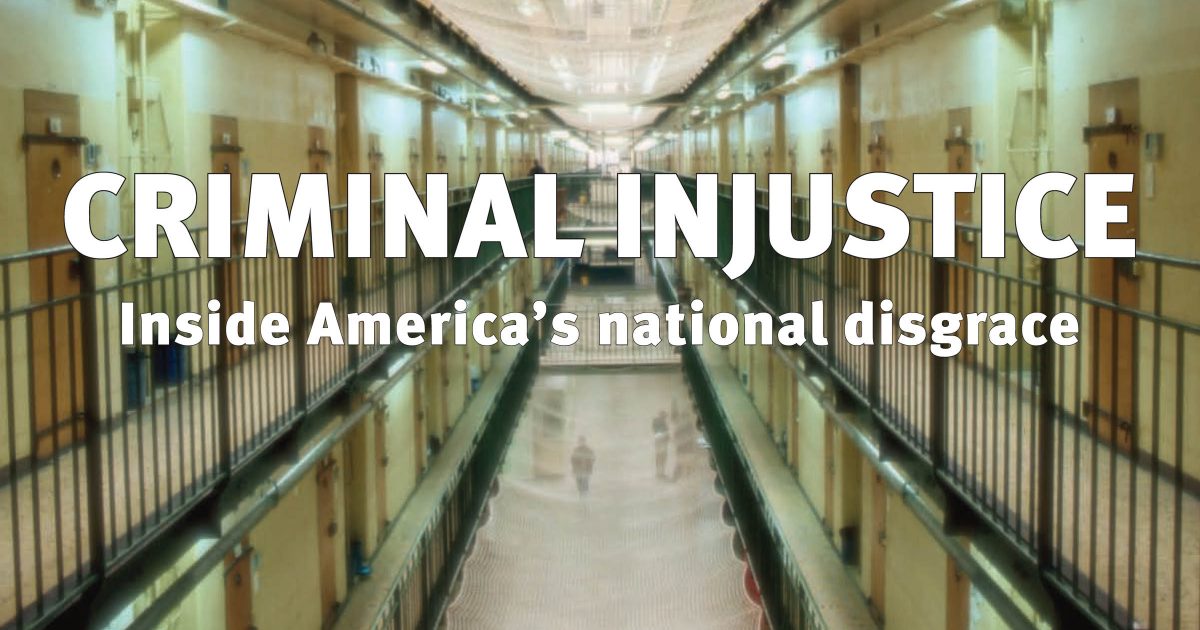 On Day 5 of Reason’s annual webathon, in which we ask our most frequent consumers to throw some end-of-the-year tax-deductible scrip into our tip jar in exchange for some sweet swag, we are going to make an appeal based on our half-century of infuriating but impactful criminal justice coverage. BUT FIRST!

Two huge announcements: Because of your startling generosity through the halfway point of this fundraising drive, we are jacking our goal upward, from $200,000 (which was just a hair below last year’s total) to $300,000, which would be our second-biggest haul in a decade of doing this. Thank you so much, and let’s re-orange that box! (Not a euphemism.)

Secondly: Toward that goal, we’ve got another anonymous challenge-granter, people! A very generous Racer X has agreed to match a whopping $50,000 of contributions from this point onward in the webathon. If we only raise $23,000 between now and Tuesday, that matching check is only $23,000. If y’all donate $50,000, well, that box be orange.

Won’t you please donate to Reason today? Now, on to today’s pitch.

“The solution to violence in America,” founding editor Lanny Friedlander wrote in the second issue of this magazine, “is painfully obvious: Unlock the doors and empty the cage.”

Friedlander was speaking metaphorically, but only just: The overincarceration of Americans, the overcriminalization of peaceful human behavior, the lopsided war between individuals and the state, have been preoccupations of the world’s flagship libertarian publication since its inception. Animated by a constrained fury at injustice, Reason has defended the defenseless, shined journalistic light at police abuse, and occasionally helped remedy wrongs. It is probably the single best reason to give a tax-deductible donation to the Reason Foundation today.

Won’t you please donate to Reason right the hell now?

Let’s give some examples. In April of this year, that heroic libertarian litigation firm, the Institute for Justice (I.J.), filed a class-action lawsuit alleging that the city of Chicago’s notorious automobile impound program—which saddles largely poor residents with fines and deprives them indefinitely of their own wheels, even if they didn’t commit so much as a traffic violation—violates due process and other constitutional protections.

How did I.J. learn about these forfeiture shakedowns? From a jaw-dropping investigation by Reason criminal justice reporter C.J. Ciaramella, our resident Freedom of Information Act ninja. (Make sure to read more about C.J.’s FOIA heroics in Katherine Mangu-Ward’s initial webathon post.)

In follow-up reporting, Ciaramella found that “Between 2012 and 2017, Chicago imposed $114 million in fines in more than 108,000 impound cases….Roughly $36 million of that money was collected based on drug violations.” One of the plaintiffs in the I.J. suit, Ciaramella wrote in October of this year, “owes…$6,000 in fines and fees after her car was impounded in 2017, even though the criminal case that led to her car being impounded was dismissed, and even though she wasn’t driving her car, or even in the state, when she violated Chicago’s city code.”

Such grim spadework can lead to tangible policy changes for the better, as when the Illinois state legislature in 2017 passed civil asset forfeiture reform—after yet another Ciaramella investigation, this one into how Chicago was using the foul police-theft tactic to shake down poor and minority communities who didn’t have the means to fight back.

In September, Associate Editor Zuri Davis wrote about the appalling case of a grieving father named Jonathan Vanderhagen, who was jailed and charged with malicious use of telecommunications services for writing Facebook posts criticizing the judge who granted custody of Vanderhagen’s two-year-old son to a mother the Michigan man had argued was not fit. The boy died from a pre-existing medical condition shortly thereafter. Two days after Davis’s post, amid widespread outcry, Vanderhagen was acquitted.

Having covered this stuff for decades, Reason has developed early-detection capabilities for sniffing out police spin, particularly in deadly use-of-force situation. Senior Editor Jacob Sullum, who literally wrote the book on the harms of prohibiting recreational drugs, is especially adept in such circumstances. On January 28 of this year, Houston police executing a drug warrant shot and killed a reportedly armed and resisting middle-aged couple named Dennis Tuttle and Rhogena Nicholas. Initially, people covering the case almost universally acclaimed the cops’ heroism in the face of deadly circumstances. Sullum on January 30 patiently explained why “I am not one of those people.”

Sullum was skeptical of the warrant, skeptical of the accounts of the couple’s behavior, skeptical of the police department’s post-shooting claims of Houston’s drug trade and anti-cop animus. He concluded that initial post: “If police officers don’t want to be portrayed as the enemy, they should stop acting like the enemy.”

Read through Sullum’s ensuing coverage in chronological order. Long story short, narcotics officer Gerald Goines has been charged with murder. As Sullum summarized last week, “a federal indictment unsealed last week shows [that] a drug raid that killed a middle-aged couple on January 28 was based on lies from start to finish, which should alarm anyone who thinks the Fourth Amendment protects Americans from unreasonable searches.”

Our work helps reorient discussion around the exercise of police power to be more skeptical of government claims, and more mindful of the many structural distortions and incentives that generate unjust outcomes. Criminal justice issues that we were toiling on nearly alone for decades—civil asset forfeiture, cash bail, junk forensics, prosecutorial immunity, no-knock raids, “drug-sniffing” dogs—have at long last become part of the national conversation about reform. Your donations help us spread awareness of these issues from the (heroic) activist fringe to the laggard mainstream.

Our coverage also contributes to the making of new libertarians. What could be more instructive about police power than, well, police power? Fully five of our top 10 highest-trafficked stories in 2019 were about criminal justice outrages:

2) “A Michigan Man Underpaid His Property Taxes By $8.41. The County Seized His Property, Sold It—and Kept the Profits,” by Eric Boehm

4) “A 16-Year-Old Girl Is Facing Child Pornography Charges for Making a Sex Video of Herself,” by Robby Soave

5) “The NYPD Bragged About a Big Pot Bust. Turns Out It Seized 106 Pounds of Legal Hemp,” by Zuri Davis

6) “Secret Memos Show the Government Has Been Lying About Backpage All Along,” by Elizabeth Nolan Brown

Note too that we’ve discussed the work of seven different Reason journalists in this post. For us, criminal justice is not some boutique beat, silo’d off from the rest of our activities. It is fundamental to what we do, and why we get up in the morning.

Won’t you please donate to Reason, so we can do more of this fundamentally important work?

In the meantime, please enjoy this video of Katherine Mangu-Ward greeting the entrance of Sen. Kamala Harris (D–Calif.) into the presidential race with the prescient reminder that Kamala is a cop.