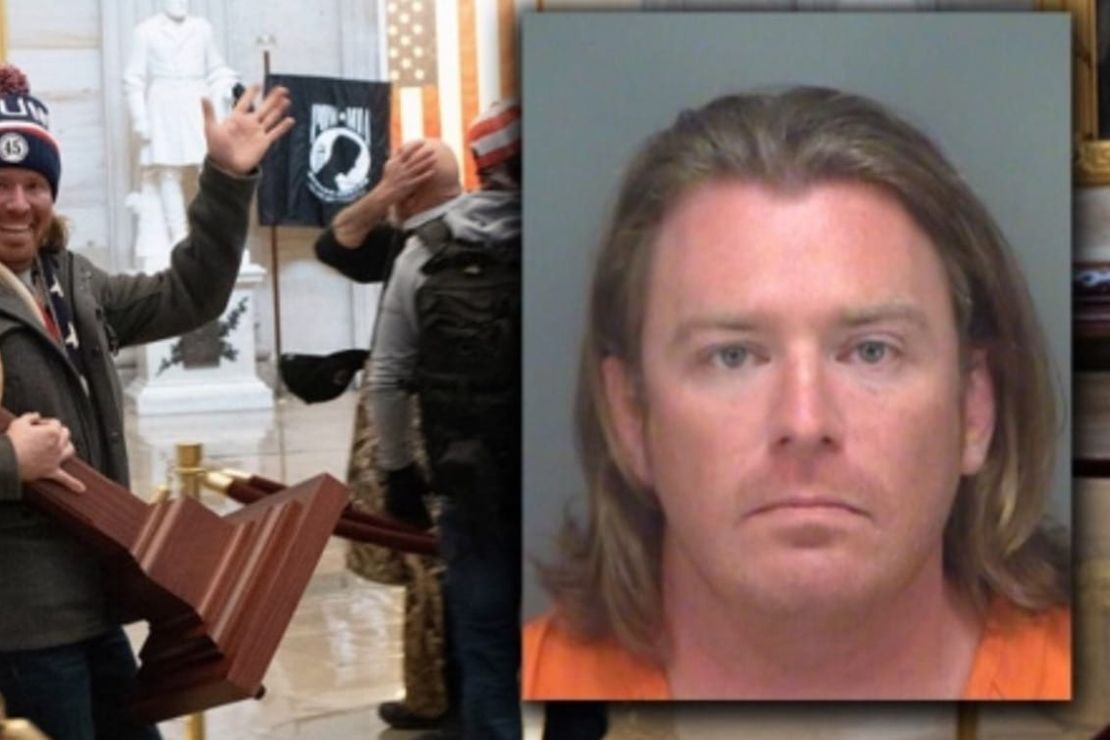 The man seen carting off House Speaker Nancy Pelosi’s podium when protesters swarmed the Capitol Building has been arrested and charged. And as Stephen Green pointed out in his PJ Media column “Florida Man Friday,” the podium purloiner is … a Florida Man.

Via Getty, one the rioters steals a podium from the Capitol pic.twitter.com/V4spojl40q

Indeed, Adam Johnson, like the Horned Man arrested at the scene, was identified by professional doxxers after the Capitol siege began.

WFLA reported that Johnson is a married father of five.

The man smiling and waving at the camera has been identified as 36-year-old Adam Johnson of Parrish in Manatee County. 8 On Your Side has learned Johnson is married to a local physician and is a father of five.

The Horned Guy Is Arrested, Charged With Breaking Into the Capitol

The DOJ announced on Saturday morning that the Florida man had already made it back home by the time the feds caught up with him.

#Breaking #Florida man Adam Johnson, seen in viral photo during the riot at the US Capitol smiling whiling carrying @SpeakerPelosi’s lectern, has been booked into the @SheriffPinellas jail on a federal warrant, according to jail records. https://t.co/hIs5L2YHJr @WFLA pic.twitter.com/XyizanRHAm

Johnson was arrested in Florida and charged with three federal counts of breaking into the Capitol, stealing the podium, and going where he wasn’t allowed to.

Adam Johnson, 36, of Florida, was charged with one count of knowingly entering or remaining in any restricted building or grounds without lawful authority; one count of theft of government property; and one count of violent entry and disorderly conduct on Capitol grounds. Johnson was arrested yesterday and is currently in custody.

It is alleged that on Jan. 6, 2021, Johnson illegally entered the United States Capitol and removed the Speaker of the House’s lectern from where it had been stored on the House side of the Capitol building. A search of open sources led law enforcement to Johnson, who is allegedly seen in a widely circulated photo inside the Capitol carrying the lectern.

Trump to Capitol Rioters: ‘You Will Pay’

Using the open sources – news and online sources – the feds were able to ID Johnson.

NBC Miami says Johnson’s friends are at the very least surprised by the Capitol antics.

A photograph taken from Wednesday’s riot showed a man believed to be Johnson carrying the lectern that reportedly belongs to House Speaker Nancy Pelosi.

Johnson is a registered voter in Manatee County listed as no party affiliation. He voted in the presidential elections in both 2004 and 2020.


NBC Miami reports that Johnson isn’t the only Florida man arrested in connection with the Capitol protest.

At least three other men from Florida have been charged with unlawful entry in the chaotic breach of the U.S. Capitol by a mob supporting President Donald Trump.

In addition, officials say a Florida firefighter has been placed on leave after photos surfaced of him participating in Wednesday’s violent event.

President Trump has recently enhanced the penalties for those vandalizing and destroying national monuments, of which the Capitol Building presumably is one. In an executive order in June, at the height of antifa and BLM violence, riots, vandalism, looting, and sacking statues, President Trump said:

My Administration will not allow violent mobs incited by a radical fringe to become the arbiters of the aspects of our history that can be celebrated in public spaces.  State and local public officials’ abdication of their law enforcement responsibilities in deference to this violent assault must end.

A member of the West Virginia House of Delegates was arrested. His livestream video showed him entering the Capitol Building.

Derrick Evans, 35, of West Virginia, was charged with one count of knowingly entering or remaining in any restricted building or grounds without lawful authority; and one count of violent entry and disorderly conduct on Capitol Grounds. Evans was taken into custody Friday.

It is alleged that on Jan. 6, 2021, Evans, a recently elected member of the West Virginia House of Delegates, streamed live to his Facebook page a video of himself joining and encouraging a crowd unlawfully entering the U.S. Capitol. In the video, Evans is allegedly seen crossing the threshold of the doorway into the U.S. Capitol and shouting, “We’re in, we’re in! Derrick Evans is in the Capitol!”


Democrats are calling for his resignation, of course.

There will be more arrests and prosecutions in connection with the Capitol riot.

Depending on where the protesters entered there appeared to be a different policy from the Capitol Police. Some of the rioters were allowed into the building. Others were tear-gassed, shot, and fought with police.

Some suggested that antifa interlopers must have seeded themselves in the crowds to foment the violence since everything was peaceful until some attempted to break into the building. Indeed, there was at least one antifa agitator egging on the violence. He claimed to be standing next to Ashli Babbitt, who was shot and killed.

Fans of Black Lives Matter and antifa rioters complain that the Capitol protesters weren’t beaten and tear-gassed like their rioters. Of course, the pro-Trump contingent hasn’t been involved in years of rioting and unrest as antifa and BLM are. Secondly, the Capitol Hill protesters were pepper-sprayed and tear-gassed. In fact, one woman, an Air Force veteran, was shot and killed by Capitol Police. Mayors, police, governors, and other decision-makers overseeing riots have never shot and killed a rioter.