Election gambit blows up on Hawley and Cruz 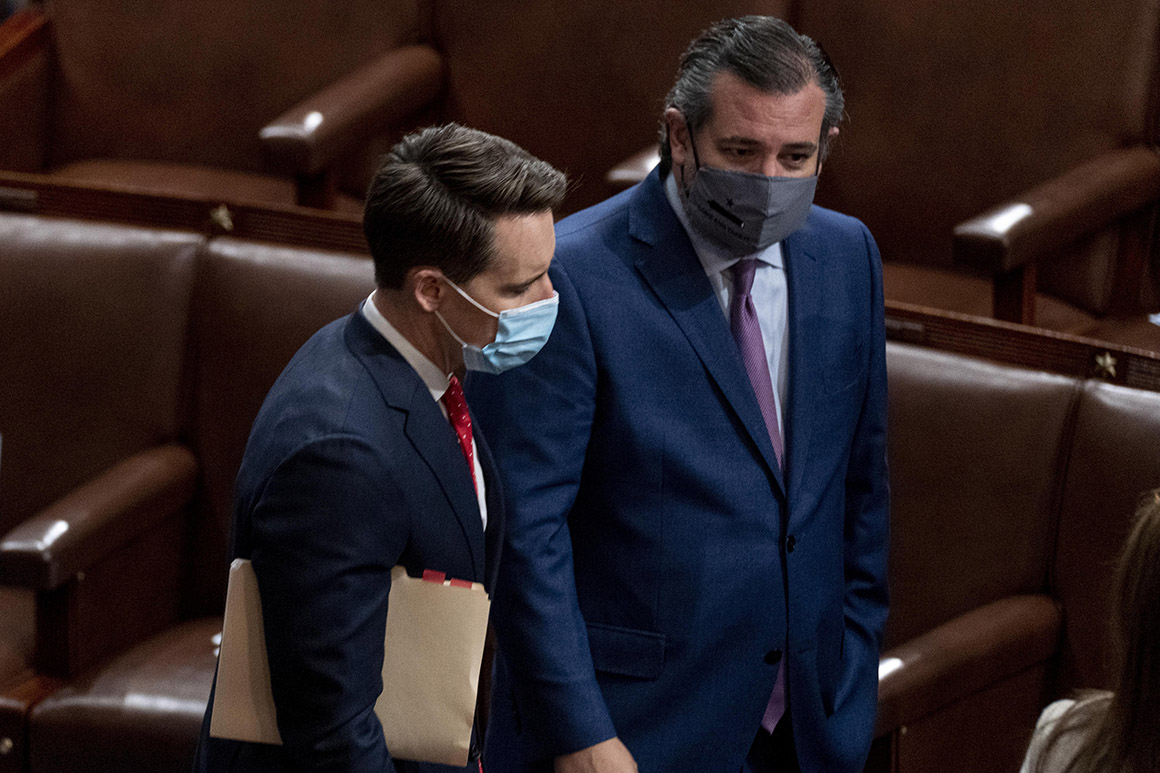 Hawley, who was photographed fist pumping protesters before they raided the Capitol, declined to be interviewed for this story.

In questioning the election results, the senators aligned themselves with Trump and his most hard-core supporters. Some in Trumpworld are still cheering them on, and they may ultimately win support from the party’s base if they run for president. But after rioters stormed the Capitol in a bid to halt certification of Joe Biden’s election, Hawley and Cruz are facing immediate consequences.

Hawley’s political patron, former Sen. John Danforth (R-Mo.), turned on him, calling his support the “biggest mistake I’ve ever made.” His top donor, David Humphreys, said he should be censured. Hawley’s book publisher dropped him, interfering with a key element of many presidential campaigns. Cruz, meanwhile, is facing a redux of the backlash he received for egging on a shutdown in 2013 over a failed effort to defund Obamacare.

“Everyone can see through, and look: understand they’re running for president,” said former Sen. Bob Corker (R-Tenn.), a frequent Trump critic. “[They] think they’re getting a pass and they can be popular with the base. And there’s no harm done. There was harm done.”

Hawley and Cruz led separate efforts Wednesday to object to the certification of election results in Arizona and Pennsylvania, despite overwhelming opposition from Senate Republicans, including Majority Leader Mitch McConnell (R-Ky.) Hawley was first to announce a challenge to Biden’s win. Cruz followed up with his own plan to object coupled with a call for the creation of a 10-day electoral commission that initially had the backing of 10 of his GOP colleagues but had no chance of being established.

Some Senate Republicans dropped their objections after the Capitol was ransacked, but Cruz and Hawley maintained their stances. Both Hawley and Cruz condemned Wednesday’s violence.

Sens. Patty Murray (D-Wash.), Ron Wyden (D-Ore.) and Chris Coons (D-Del.) are all calling on both men to resign.

Sen. Joe Manchin (D-W.Va.) said in an interview that he lobbied Hawley, Cruz and Sens. James Lankford (R-Okla.) and Steve Daines (R-Mont.) to change their minds on objecting to Biden’s electoral votes when senators were holed up in a secure area following the attack. Lankford and Daines backed off “when they saw the danger of what happened,” Manchin said. He told Hawley to “please think of what you’re doing, please reconsider what you’re doing.”

Hours later, after rioters were finally cleared from the Capitol, Hawley still objected to Pennsylvania. And Cruz voted with Hawley against certifying the election in the Keystone State. Five other GOP senators joined them.

“There’s no way they cannot be complicit in this. That they think they can walk away and say, ‘I just exercised my right as a senator?’ Especially after we came back here and after they saw what happened,” Manchin said. “I don’t know how you can live with yourself right now knowing that people lost their lives.”

It’s possible even without Cruz and Hawley, a different Republican senator would have worked with the House to challenge the election. But both fought to become faces of the efforts and everyone in Washington thinks they have spent the last month positioning themselves for the next presidential race. They sent fundraising solicitations on Wednesday afternoon as the riot outside the Capitol spiraled out of control.

Cruz said that he told his staff on Wednesday to halt all fundraising immediately “because we had a terrorist attack on the Capitol.” But when they were fundraising off the issue in the days before, other GOP candidates’ money spigot dried up completely and was replaced by hundreds of angry emails from small-dollar donors asking why Republicans weren’t standing with Hawley and Cruz, according to an aide to a Republican senator.

Sen. Bob Casey (D-Pa.) said if Cruz or Hawley win the 2024 GOP nomination, “I’ll be spending a lot of time making sure the people of Pennsylvania don’t forget.”

Sen. Mitt Romney (R-Utah) said election objectors “will forever be seen as being complicit in an unprecedented attack against our democracy.” Sen. Tom Cotton (R-Ark.), also a potential presidential contender, said on Fox News that “these senators, as insurrectionists were literally storming the Capitol, were sending out fundraising emails.”

“Sen. Hawley was doing something that was really dumbass,” Sen. Ben Sasse (R-Neb.) told NPR Friday. “It was a terrible, terrible idea and you don’t lie to the American people.”

Sen. Mike Lee (R-Utah) said that while he “strongly disagreed” with Cruz and Hawley’s decision to challenge the election results, “there is a difference between weighing in on a particular issue and inciting violence.” Daines, meanwhile, said that Cruz was “very clear that this was not about overturning the election.”

One GOP senator, who spoke on the condition of anonymity, predicted the caucus would face a reckoning over Hawley and Cruz.

“Their whole antic, if you will, is a lie. It’s built on a lie and both know that,” the senator said. “To the degree that perpetuating this lie helped incite the crowd, that’s a responsibility that Ted and Josh sort of own, along with Donald Trump.”

While the raiding of the U.S. Capitol drew widespread condemnation from members of both parties, the GOP grassroots is still devoted to Trump.

Hawley may also become a martyr for the conservative free speech movement after Simon and Schuster cancelled his book. And the anti-establishment Senate Conservatives Fund is giving backup to Hawley as he’s being abandoned by other allies.

“The junior senator from Missouri’s decision to object to the election results showed tremendous courage,” reads a fundraising email sent out Friday.

“Sen. Hawley stood up for election integrity by objecting to the Keystone State’s Electoral College votes and should be commended,” said Greg Manz, an-ex Trump staffer who worked on his 2016 and 2020 campaigns. “President Trump’s supporters will not forget his bold efforts to defend the Constitution.”

But others said Trump supporters view Hawley and Cruz as inauthentic.

“They saw through his blind ambitious act and it just wasn’t viewed as genuine,” former 2016 Trump campaign aide Bryan Lanza said of Trump voters’ view of Hawley. “They don’t think he’s a real MAGA supporter. … He just comes across as insincere.”

Much of the recent outrage has centered on Hawley, currently the youngest senator, who is trying to channel Trump’s populism into tangible policy. He worked with Sen. Bernie Sanders (I-Vt.) to advance $2,000 stimulus checks, has called for federal subsidization of jobs during the pandemic and tanked his own party’s judicial nominees.

Cruz on Friday said that he viewed his effort as a middle ground to Hawley’s move and immediately certifying Biden’s win, because senators “were being given two choices both of which were really lousy choices.”

For Cruz, it’s a return to the old days of getting a cold shoulder from the establishment wing of the GOP. He helped lead the charge into the 2013 shutdown over defunding Obamacare and accused McConnell of lying in 2015, moves that cost him support from senators in his run against Trump.

Still, Cruz was Trump’s fiercest competitor by the end. And he eventually became one of Trump’s closest allies despite Trump attacking his wife on the trail and refusing to endorse Trump for weeks.

Cruz distanced himself from Trump Friday, but he’s not joining calls for his immediate resignation.

“The president’s language and rhetoric was reckless,” Cruz said. “And it was not helpful. That’s not what I was saying.”

Daniel Lippman contributed to this report.

PrevPreviousArizona Nurse Nicole Koller’s Vaccine Was Delayed. Now She Has COVID.
NextLoyal to Trump for Years, Manufacturing Group Now Calls for His RemovalNext