Did Trump Commit a Crime When He Riled Up His Supporters Before They Rioted? – Reason.com 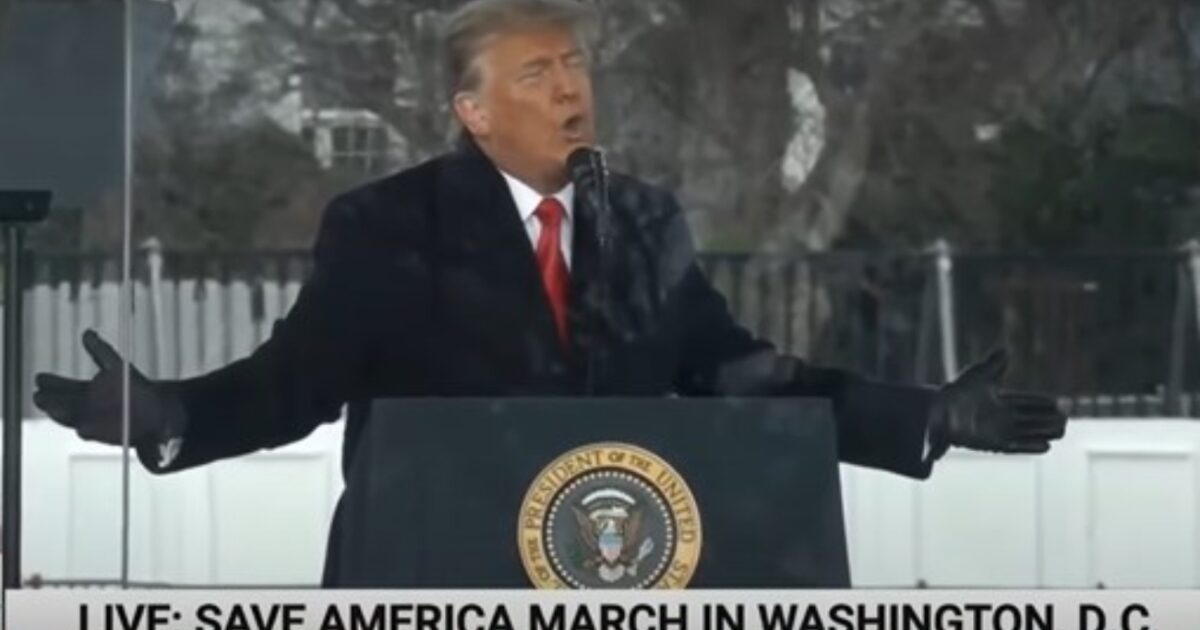 The inflammatory speech that Donald Trump delivered to thousands of his most passionate followers shortly before hundreds of them attacked the Capitol was an act of egotism and recklessness that stood out even in a presidency suffused with both. Was it also a crime?

“The Justice Department said on Thursday that it would not rule out pursuing charges against President Trump for his possible role in inciting the mob that marched to the Capitol, overwhelmed officers and stormed the building a day earlier,” The New York Times reports. Michael Sherwin, acting U.S. attorney for the District of Columbia, told reporters, “We are looking at all actors, not only the people who went into the building.” When he was asked whether those “actors” might include the president, he replied, “We’re looking at all actors. If the evidence fits the elements of a crime, they’re going to be charged.”

It seems pretty clear that Trump’s behavior, while outrageous and irresponsible, does not fit the elements of a crime. Under the Supreme Court’s First Amendment precedents, inflammatory speech can be punished only in narrowly defined circumstances that go beyond what happened on Wednesday. Under federal law, incitement to riot does not include “advocacy of ideas” or “expression of belief” unless it endorses violence, which Trump did not do.

The Times nevertheless reports that Trump “suddenly realize[d] he could face legal risk for prodding the mob,” which persuaded him to record the message he posted on Twitter yesterday, in which he unequivocally condemned the rioters for the first time without reiterating the stolen-election fantasy that motivated them. After insisting in his pre-riot speech the day before that “we will never give up” and “we will never concede,” a seemingly chastened Trump did just that, saying, “A new administration will be inaugurated on January 20th.” He added that “this moment calls for healing and reconciliation.”

It was a bit late for that. For more than two months, Trump insisted, over and over again, that he actually won the election by a landslide, that Democrats deprived him of his rightful victory through a massive criminal conspiracy, and that letting them get away with it would destroy democracy and ruin the republic. That message culminated in Wednesday’s incendiary speech, during which the president addressed the angry supporters who had gathered for a Trump-promoted “Save America March” aimed at preventing President-elect Joe Biden from taking office.

Trump began his rant an hour before a joint session of Congress convened to ratify Biden’s victory. Railing against “this egregious assault on our democracy,” he urged his followers to “show strength” and “take back our country” by “marching over to the Capitol building” and “demand[ing] that Congress do the right thing.” The “right thing,” according to Trump, was overturning the election results by rejecting electoral votes for Biden. But it was clear that Congress was not about to do that, especially after Vice President Mike Pence, who was charged with presiding over the joint session, forcefully rejected the president’s specious argument that he had the unilateral power to deliver the outcome Trump wanted.

The result was not hard to predict as thousands of aggrieved and frustrated Trump fans, riled up by the president, streamed toward the Capitol on a mission that was bound to fail. Does that mean Trump, legally speaking, incited a riot?

Under federal law, “to incite a riot” means “to organize, promote, encourage, participate in, or carry on a riot.” The crime, which is a felony punishable by up to five years in prison, “includes, but is not limited to, urging or instigating other persons to riot, but shall not be deemed to mean the mere oral or written (1) advocacy of ideas or (2) expression of belief, not involving advocacy of any act or acts of violence or assertion of the rightness of, or the right to commit, any such act or acts.”

Even advocacy of illegal behavior, the Supreme Court ruled in the 1969 case Brandenburg v. Ohio, is constitutionally protected speech unless it is both aimed at inciting “imminent lawless action” and likely to do so. The case involved a Ku Klux Klan leader, Clarence Brandenburg, who was accused of advocating violence in the service of a political cause and participating in a gathering aimed at promoting “the doctrines of criminal syndicalism.”

The charges stemmed from a KKK rally that featured weapons, hoods and robes, a cross burning, and racist and anti-Semitic rhetoric. “Personally,” Brandenburg said, “I believe the nigger should be returned to Africa, the Jew returned to Israel.” He also alluded vaguely to the possibility of violent resistance. “We’re not a revengent organization,” he said, “but if our president, our Congress, our Supreme Court, continues to suppress the white, Caucasian race, it’s possible that there might have to be some revengeance taken.”

The Court ruled that Brandenburg’s speech was protected by the First Amendment. “The constitutional guarantees of free speech and free press,” it said, “do not permit a State to forbid or proscribe advocacy of the use of force or of law violation except where such advocacy is directed to inciting or producing imminent lawless action and is likely to incite or produce such action.”

Given the circumstances, Trump’s speech was likely to result in imminent lawless action by at least some of the demonstrators. But were his comments “directed” at that outcome? In other words, did he intend to cause a riot?

The attack on the Capitol, which provoked bipartisan condemnation of Trump’s rhetoric, second thoughts by senators who had planned to challenge Biden’s electoral votes, disgusted resignations by Cabinet members, and threats of a second impeachment, certainly did not redound to his benefit. That fact does not necessarily illuminate Trump’s intent, since he has never been very good at controlling his impulses or anticipating how his unhinged remarks will affect his political interests.

On its face, however, Trump’s speech called for nothing but peaceful protest. “We have come to demand that Congress do the right thing and only count the electors who have been lawfully slated,” he said. “I know that everyone here will soon be marching over to the Capitol building to peacefully and patriotically make your voices heard today.”

Citing unnamed “officials,” the Times reports that Trump “was initially pleased” when some of his supporters “stormed into the Capitol” and that he “disregarded aides pleading with him to intercede.” But about 20 minutes after the demonstration turned violent, Trump urged his supporters to “stay peaceful.” Half an hour later, he reiterated that message: “I am asking for everyone at the U.S. Capitol to remain peaceful. No violence! Remember, WE are the Party of Law & Order—respect the Law and our great men and women in Blue.” Later that day, he recorded a message urging the protesters to “go home now,” saying “we have to have peace,” even while continuing to insist that “we had an election that was stolen from us.”

Trump did not advocate violence, even in general terms. If his remarks qualify as incitement to riot, so would similarly fiery rhetoric at other protests that are marked by violence.

In 2016, a Baton Rouge police officer who was injured during a Black Lives Matter demonstration sued one of the movement’s leaders, DeRay Mckesson, saying he “incited the violence.” A federal judge dismissed the lawsuit after concluding that Mckesson “solely engaged in protected speech” at the protest. The U.S. Court of Appeals for the 5th Circuit later revived the lawsuit, but its decision focused on the allegation that Mckesson “directed the demonstrators to engage in [a] criminal act” by blocking a highway, which “quite consequentially provoked a confrontation between the Baton Rouge police and the protesters.”

Trump, by contrast, did not commit a crime or urge others to do so, even if the violence that followed his speech was predictable. His opponents may regret establishing a precedent that speakers who neither commit nor advocate violence can be prosecuted for the criminal conduct of people inspired by their words.