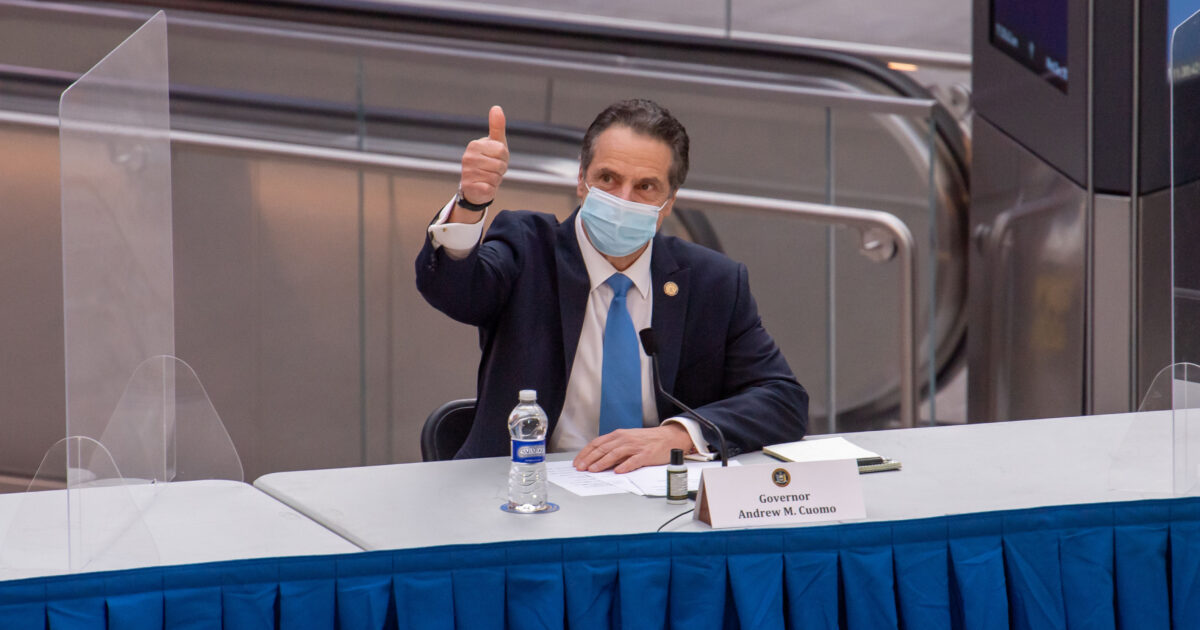 New York Gov. Andrew Cuomo announced Friday that he would relax his stringent COVID-19 vaccine restrictions—which essentially held that health care workers had exclusive dibs on inoculation—and open the next eligibility tier on the state’s distribution plan. Starting today, firefighters, police officers, the National Guard, teachers, public health workers, grocery store workers, pharmacists, transit employees, and those who are 75 or older will be allowed to schedule their vaccination.

That’s good news—to a degree. Cuomo’s vaccine rollout has been so mired in regulation that health care providers were forced to throw away expired doses, and there is no guarantee that won’t continue to happen even with this change. This in the state that holds the most populous city in the country.

Cuomo presented area hospitals with a double bind: Fail to use all of your vaccines and be fined up to $100,000, or vaccine people out of order and be fined $1,000,000. Inoculating health care workers first may sound sensible on the surface, but that evaporates when you consider that logistical externalities often prevent providers from corralling such employees in perfect time. (The Moderna and Pfizer vaccines can last for several months while frozen, but after thawing they have a very short shelf-life.) If those hospitals strayed and found an alternative candidate outside the mandated plan, they would have met financial ruin.

That threat is not an empty one: At least one hospital is under investigation for daring to vaccinate school officials before their time came.

Cuomo has claimed that such rules are necessary to prevent shady providers from constructing vaccine bribery schemes and pushing their friends to the front of the line. That concern may not be utterly groundless, but there is no evidence of widespread inoculation fraud. Compromising the health of New Yorkers seems an inept response to a negligible risk. The benefit of keeping the state’s senior citizens alive surely trumps such a worry.

New York’s graduation to tier 1b is a step in the right direction—now 3.2 million more people can receive the vaccine without health care providers worrying about their careers ending. But the state is still excluding large swaths of senior citizens in favor of “critical infrastructure workers,” such as grocery attendants. Those workers are providing a vital service, but many are also young and healthy, with much less risk of dying should they contract COVID-19.

Health care workers still have first claim on available vaccines, and at New York’s current rate, it will take until April to address 1b qualifiers.

What’s more, it appears that providers may still face harsh repercussions should they stray from Cuomo’s order. Guidance released this weekend will now allow hospitals to use surplus vaccines on any public-facing employee if no one in “the priority population can come in before the doses expire,” and pharmacies can do the same for “store clerks, cashiers, stock workers and delivery staff.” But those limitations are still arbitrary and a potential threat to public health.

Perhaps that sounds like a silly objection in context: After all, 4 million people can now receive the vaccine statewide. But people have been known to ghost their vaccine appointments even as doses are nearing expiration, something that no provider can foresee. As I wrote last week, the D.C. Department of Health permits providers to pull aside any willing recipient if they have surplus vaccines that would otherwise go to waste. New York’s regulations on who may benefit from those extra doses still means some might end up in the trash. What happens when all the clerks and delivery staff are vaccinated?

Israel is in a different position, with 20 percent of its population now vaccinated. As of last week, about 100,000 of those recipients were aged 20 to 40, with many falling outside the government’s current distribution tier. That’s because inclined volunteers may receive a surplus dose as opposed to a provider throwing it in the trash.

The small country has already administered 1.7 million first doses. New York, by contrast, has given just 555,000.