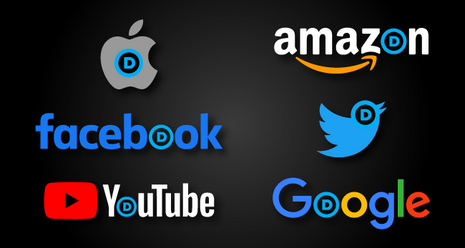 Media Research Center (MRC) President Brent Bozell and more than 30 conservative leaders issued the following statement Monday calling for the breakup of Big Tech companies including Amazon, Google, Facebook and Apple after their sweeping acts of censorship against conservatives and President Donald Trump this past week.

“Big Tech has declared war on free speech and is now an existential threat to democracy. The tech tyrants began to systematically shut down the conservative movement over the weekend. This is an all out assault on our republic from within like we’ve never seen before. We will not stand idly by as they cancel conservatives for daring to speak freely.

Big Tech is using the violent riot at the Capitol last week – even though it was immediately condemned by all conservatives – as an excuse to do what they have always wanted to do: banish conservatives from the internet. Over the last 72 hours, Big Tech proved they are too big and too powerful yet again, with Apple, Google, and Amazon collectively shutting down Parler. Free speech was controlled like this in East Germany and the Soviet Union. This should not be happening in America.

Freedom has never been threatened like this before. We live our lives online, especially now, during the pandemic. The entire conservative movement will be canceled by the left and their thugs if we let them. They will turn the screws on conservatives if we don’t defend our rights. It is time to stand up and demand the breakup of these big tech monopolies.