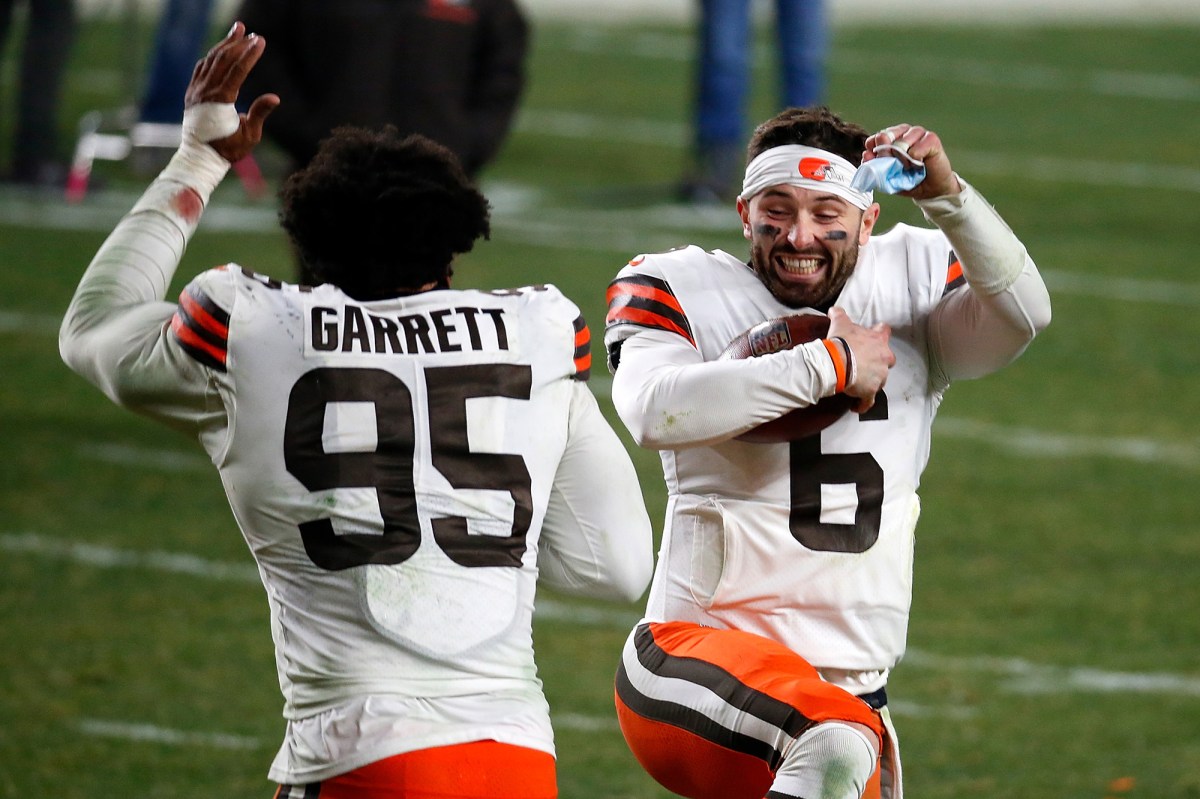 If ever there came a time when an entire city felt like rising as one and celebrating Baker Mayfield planting a Browns flag on the Steelers logo, it was Sunday night, and it was Cleveland.

The football gods wore brown and orange on this night and it was as if Roethlisberger Big Ben (47-for-68, 501 yards, 4 TDs, 4 INTs), now 23-3-1 against the franchise that didn’t draft him 16 years ago, was seeing ghosts who were making him look older at 38 than Tom Brady looks at 43.

It is sometimes difficult to remember that this was once the franchise of Paul Brown and Otto Graham and Jim Brown.

But on this night, it was as if every Brown was Jim Brown.

Believe it or not, Cleveland was Believeland.

The Browns, 48-37 winners, turned the place into a Junkyard Dawg Pound.

And just when it looked as if the football gods were threatening to play the cruelest trick of treachery you will ever see, when Big Ben, who had been Little Ben, began slinging the football all over the lot and hit Chase Claypool with a 29-yard TD pass with 11:08 left, when the city started becoming wracked with anxiety, Baker Mayfield, behind a decimated offensive line that included one veritable stranger he had just introduced himself to, engineered a 6-minute, 40-second field-goal drive that left Big Ben only 4:28.

Time enough to throw a fourth interception to Sione Takitaki.

“No one believed in us besides us,” Mayfield said.

Minutes earlier, after Mike Tomlin made a mistake punting fourth-and-1 at his 46 at the start of the fourth quarter, Mayfield’s 40-yard TD screen to Nick Chubb stopped the bleeding.

Somebody Up There Liked Them. How else do you explain these Browns showing up with head coach Kevin Stefanski quarantined at home following a positive COVID-19 test, replaced by special teams coordinator Mike Priefer, a proud son of Cleveland, the play-calling duties handed over to OC Alex Van Pelt? The Next Man Up All-Stars, this resilient underdog team that didn’t receive clearance to practice until Friday, that was motivated by Steelers WR JuJu Smith-Schuster rubbing salt in the city’s wounds when he said: “The Browns is the Browns.”

The Browns is not the Browns.

“I wasn’t here for things that have happened in the past, some of which I was too young to even remember,” Mayfield said. “There’s a new standard, We’re gonna try and keep it that way.”

It was 28-0 in the first quarter and Mayfield (21-for-34, 263 yards, 3 TDs) had a TD pass to Jarvis Landry and Kareem Hunt had two TD runs and Little Ben had two interceptions, and then a third within the first two minutes of the second quarter.

James Conner had just scored on a 1-yard run to make it 28-7 when Mayfield, third-and-6 at his 40, answered right back. Mayfield put his head down and ran to his left and bulled his way out of bounds for the first down with 1:21 left before intermission. And then capped the drive with a 7-yard TD pass to Austin Hooper.

Mayfield has always been a rebel with a cause, has always laughed in the face of adversity, and his cause when he was drafted first overall was to change the narrative of a franchise that had been a quarterback graveyard. He is the 30th starting quarterback since the city welcomed back its beloved Browns in 1999 following the three-year deactivation when Art Modell bolted to Baltimore.

“Winning the game will take care of winning them over,” Mayfield had said at his introductory press conference, “but I did genuinely want to come here. They have a great history, and these fans deserve a team that has success, and so you want to be the guy to lead that, that’s just human nature. You want to be that person, so for me being as competitive as I am, the bigger the challenge for me, I think the better for me.”

Mayfield blamed himself for his failed quarterback sneak against the Jets, but he won the game he had to win when Tomlin rested Roethlisberger, opening the door to this shocker, and he was the field general that Priefer and Van Pelt needed him to be.

The Browns’ next Super Bowl championship will be their first Super Bowl championship. They last won a playoff game on Jan. 1, 1995, when Bill Belichick was the coach and Vinny Testaverde was the quarterback. The Steelers stormed back to knock them out of the playoffs in January of 2003. They hadn’t returned to the postseason until Sunday night. They had lost 17 consecutive games at Heinz Field. They were 0-16 only three seasons ago.

“Nobody here’s satisfied yet,” Mayfield said. Maybe the football gods can join them.