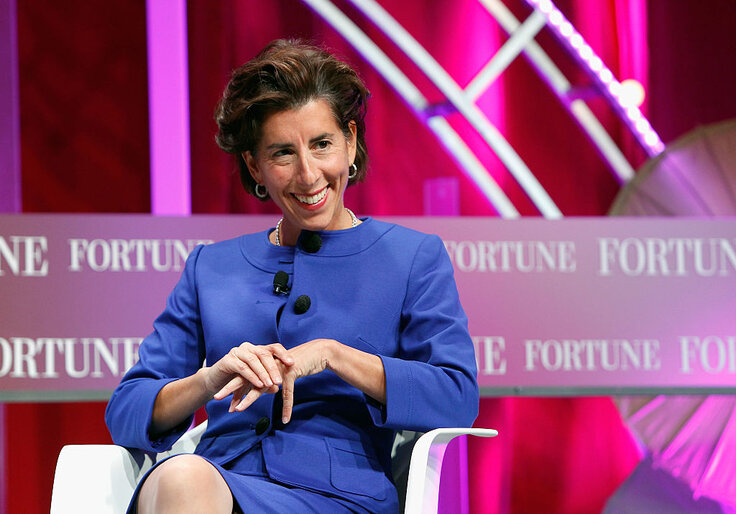 Raimondo, the third least-popular governor in the United States prior to the pandemic, is slated to take the helm of the Commerce Department later this month. In an announcement Thursday, Biden lauded Raimondo for being the first woman to hold the office of Rhode Island governor and boasted of her work to lower the state’s unemployment rate.

Costly missteps have tainted Raimondo’s tenure as governor. Despite multiple warnings from the federal government, in 2016 her administration rubber-stamped a massive overhaul of the state’s welfare-distribution program that left thousands without Medicare or food assistance for months. A scathing report on the state’s child-services department, meanwhile, slammed the Raimondo administration for not taking the proper precautions to prevent children from being abused or neglected.

Since assuming office in 2015, Raimondo has consistently ranked among the least-popular governors in the country, according to Morning Consult data. She had the lowest approval rating of any United States governor in 2019, the same year she was elected chairwoman of the Democratic Governors’ Association.

Two years into Raimondo’s tenure, the Justice Department launched an investigation into Rhode Island’s Health and Human Services Department after her administration signed off on overhauling the state’s welfare-distribution program with a new software system in September 2016. The federal government warned the department multiple times the month prior, saying the $364 million United Health Infrastructure Project was unprepared for launch.

The state implemented the new system regardless, and thousands of Rhode Islanders were unable to receive their Medicare and food benefits for months. The U.S. Agriculture Department levied an $800,000 fine on the state, and the ACLU sued the health department.

Though the system has taken years to fix, Raimondo extended the state’s contract with the company responsible for developing the software in 2019. That year, state officials estimated that the system would cost state taxpayers $154 million, with the federal government picking up the rest of that $656 million tab through 2021.

The Rhode Island Department of Children, Youth, and Family Services came under fire after a federal government report found that the state did not take proper measures to protect children from abuse and neglect. Raimondo faced criticism for failing to remove former children’s-services director Jamia McDonald, who oversaw the department for years despite her failure to meet minimum requirements under state law to direct the office.

Trista Piccola, whom Raimondo chose to replace McDonald, stepped down after Child Advocate Jennifer Griffith released a report that blamed the child-services department’s inaction for the death of a 9-year-old girl in foster care in 2019. An independent agency conducted a “top-to-bottom” review of the agency following that death and multiple others in recent years.

Neither the Biden transition team nor Raimondo’s office responded to requests for comment.

As Biden’s Commerce Department pick, Raimondo will be responsible for bolstering the economy and fostering job creation as pandemic-related government shutdowns continue to shutter businesses and leave millions of Americans without work. While she ranked as one of the least favorable governors since taking office, her popularity rose during the coronavirus pandemic.

“We know that since she has been governor, the [children’s services department] has lost several children, they have been killed in state care,” Cienki said. “The DMV has been a disaster, the [United Healthcare Infrastructure Program] was an utter disaster, and in terms of commerce, someone is negotiating international trade deals. That’s something she has no experience in.”

Raimondo backed former New York City mayor Michael Bloomberg in the Democratic primaries, signing on as national co-chair of his campaign in February 2020. Bloomberg dropped out of the race one month later after a disastrous Super Tuesday performance. That same day, Raimondo announced she would endorse Biden for the remainder of his campaign.

Though the president-elect floated the governor for health and human services secretary in December, Raimondo withdrew herself from consideration for the position, at the time saying she needed to focus on fighting the coronavirus pandemic in her state.

Alex Nester is an intern at the Washington Free Beacon and will begin a fellowship with The Public Interest in September. She graduated from Hillsdale College this spring with a bachelor of arts in economics.