Welcome to the Washington Free Beacon’s morning newsletter, your comprehensive briefing on the Enemies of Freedom. To get this newsletter sent straight to your inbox every morning, sign up here.

BAD STRATEGERY … “Biden denies speculation of a one-term pledge,” via NBC NEWS: Politico, citing “four people who regularly talk to [Joe] Biden,” reported that the campaign had revived discussions about whether the 77-year-old should publicly make such a pledge, and that Biden himself had signaled to aides he would not seek re-election.

The Biden campaign had earlier pushed back on the speculation.

“Lots of chatter out there on this so just want to be crystal clear: this is not a conversation our campaign is having and not something VP Biden is thinking about,” deputy campaign manager Kate Bedingfield tweeted.

GOOD STRATEGERY … “Democrats’ January Plans Scrambled by Likely Impeachment Trial,” via WSJ: Senate Majority Leader Mitch McConnell of Kentucky was asked what date the Senate will return in January. He remained coy, joking, “It’ll be right around the time the bowl games end. How about that?” The 2020 College Football Playoff National Championship game will be played Jan. 13.

PERV HAS MONEY LEFT OVER FOR CHERISHED GUN CONTROL INITIATIVE … “Weinstein and His Accusers Reach Tentative $25 Million Deal,” via NYT: After two years of legal wrangling, Harvey Weinstein and the board of his bankrupt film studio have reached a tentative $25 million settlement agreement with dozens of his alleged sexual misconduct victims, a deal that would not require the Hollywood producer to admit wrongdoing or pay anything to his accusers himself, according to lawyers involved in the negotiations.

SOMEBODY TELL NICOLLE WALLACE … “DOJ Inspector General Michael Horowitz: My Report Doesn’t ‘Vindicate Anybody’,” via DAILY BEAST: Horowitz rejected the notion that anyone linked to the investigation should feel exonerated. “You know, I think the activities we found here don’t vindicate anybody who touched this,” he said.

Graham went on to bring up comments [James] Comey made last year that “the notion that FISA was abused” in the investigation was “nonsense,” asking Horowitz if he took issue with that.

“Certainly our findings were that there were significant problems,” Horowitz replied.

Warren has also seen her standing in the polls in Iowa and nationally deteriorate over the past month. The drop came after increased scrutiny of Warren’s plans to pay for and implement a government-run Medicare for All.

VERY WEAK, THEY ARE … “Baby Yoda Is More Popular Than 2020 Democrats, but Could He Actually Be President?,” via TEEN VOGUE: Baby Yoda, the character from the new Star Wars series The Mandalorian on Disney+, surprised many last month by outpacing Democrats on the number of interactions received on stories about them that were posted on Facebook and Twitter, according to a report from Axios. Based on data from NewsWhip from November 12 through November 25, the precious little bean blew Democratic presidential candidates out of the water when it came to online buzz.

STILL WAITING ON THOSE BOMBERS … “U.S. Imposes New Sanctions on Iran Airline Over Proliferation,” via REUTERS: The United States on Wednesday imposed new sanctions on Iran’s biggest airline and its shipping network, accusing them of transporting lethal aid and weapons of mass destruction proliferation.

The new sanctions come just days after a weekend prisoner swap between the historic foes, a rare act of cooperation since tensions escalated after U.S. President Donald Trump withdrew from the 2015 Iran nuclear accord.

ALL THE NEWS THAT’S FIT TO PANIC … “Trump’s executive order on campus anti-Semitism, explained,” via VOX: The order, which the [New York] Times did not quote or post, would in their description “effectively interpret Judaism as a race or nationality, not just a religion.” Commentators on Twitter extrapolated a disturbing similarity to Nazi-era laws on the status of Jews, and warned that the Trump administration would use this order to crack down on pro-Palestinian speech at American universities.

But a draft of the executive order—published Wednesday morning by the news site Jewish Insider—is far less troubling than the Times made it out to be. The executive order has still not been officially issued, but according to the draft text, it does not redefine Judaism as a nationality. Instead, it appears to largely be a reiteration of 2010 guidance issued by the Obama administration aimed at providing a more expansive definition of anti-Semitism. 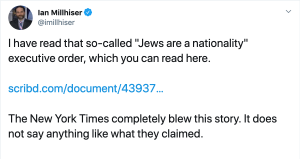 The network only showed a brief segment of Sen. Lindsey Graham’s (R., S.C.) statement, during which he discussed Russian interference in the 2016 election, and displayed video of the hearing without audio while reporters and pundits discussed the impeachment inquiry.

DON LEMON LOSES IT OVER A MEME … by WFB’s Cameron Cawthorne: “What are we—in junior high school? Like, what the hell? What is this?” Lemon said. “I cannot believe that I’m even having to report this on the news. This is crazy. This is literally crazy. Are you people insane?” …

The meme that caused Lemon’s meltdown is a video showing Trump’s face on the body of the Marvel supervillain Thanos in the film Avengers: Endgame.

Daniela Barca, a 14-year-old freshman at Roy C. Ketcham High School in Wappingers Falls, New York, expressed interest in founding a Christian student club only to be blocked by school officials. The First Liberty Institute, a nonprofit religious freedom law firm, sent a letter to the Wappingers Central School District claiming that the district’s actions violated the Equal Access Act of 1984, which prohibits discrimination “on the basis of religious content.”

SCHOOL’S OUT … “TRUANTS REJOICE: Greta Thunberg Wins ‘Person of the Year’ as Kamala Harris Flames Out,” by WFB’s Andrew Stiles: December 2019 is shaping up to be one of the most momentous months on record for the pro-truancy movement. One week after Kamala Harris, the anti-truancy former attorney general of California, ended her failed presidential campaign, TIME magazine named celebrity truant and climate activist Greta Thunberg the “Person of the Year.” …

If Harris managed to run a minimally competent and coherent presidential campaign, she might have been able to wield the considerable powers of the presidency in order to eradicate truancy from the face of the earth, beginning with the arrest and prosecution of Thunberg. Alas, she could not.

“You know who really doesn’t have it? Joe Biden.” —Former President Barack Obama

Thanks for reading! Send tips to rutz@freebeacon.com.