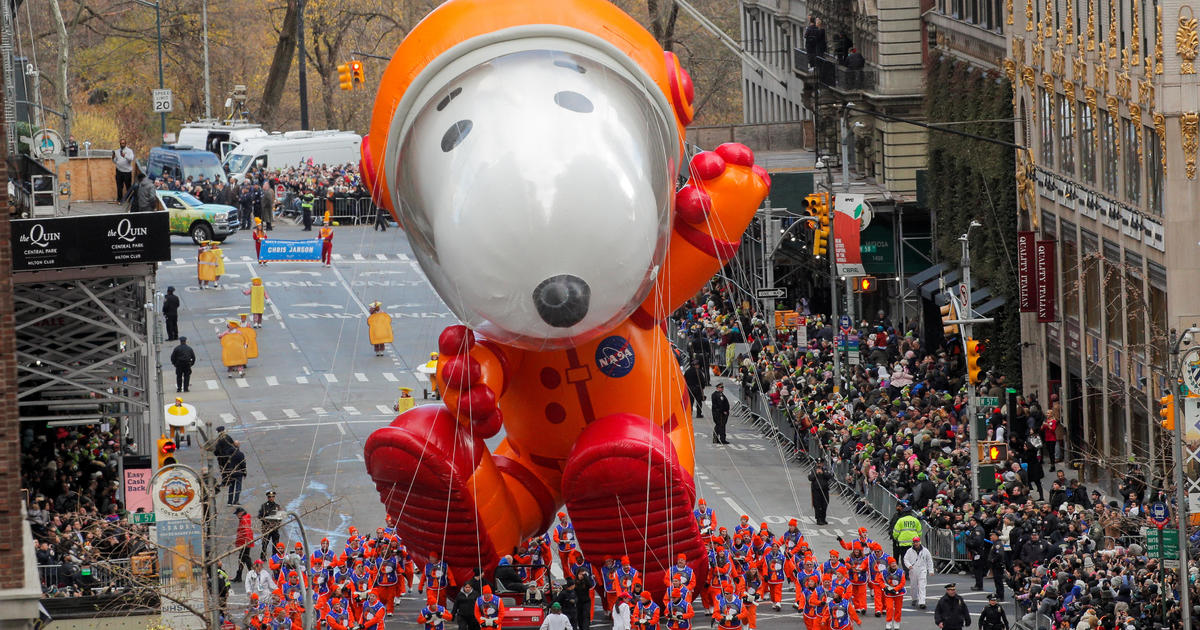 The parade is over as Santa and Mrs. Claus arrive in front of Macy’s. The final float of the 2019 edition of the annual Thanksgiving Day Parade was preceded by the Spirit of America Dance Stars.

As its handlers walked down Central Park West, the new-for-2019 SpongeBob and Gary balloon was flying noticeably lower than prior years. The balloon is 44 feet tall and 46 feet long and takes 90 handlers.

Winds have picked up

The Paw Patrol balloon has reached the finish line on 34th Street. The winds have picked up and the balloon was lowered along the parade route.

The new Green Eggs and Ham balloon just passed the CBS building on 6th Avenue. The 46-foot tall balloon is being carried so low it’s almost on the ground. The balloon is as wide as five New York taxis and takes 90 people to hold its ropes.

As the 30-foot tall, 17-foot wide ice cream cone balloon crossed in front of the 34th Street end of the parade, it was nearly on the ground and almost unrecognizable as an ice cream cone. It was carried sideways, not upright, barely off the ground.

The parade has arrived in Herald Square

The front of the parade has finally reached the finish at Herald Square. The Tom Turkey float, accompanied by clowns and the Macy’s star balloons, just passed in front of Macy’s entrance on 34th street.

Tom Turkey was followed by the first marching band, the Peanuts float and the new Astronaut Snoopy balloon. The 43-foot long, 49-foot tall balloon took 90 handlers, but made it to the end of the windy parade route without incident.

Let’s have a parade!

It kicked off with a performance by the Broadway cast of “Ain’t Too Proud — The Life and Times of the Temptations.”

Police made an announcement shortly before the parade started that the beloved big balloons would fly despite windy conditions. They will be flying at lower levels.The balloons aren’t allowed to fly if it’s too windy.

Astronaut Snoopy is the first big balloon in this year’s lineup. The latest version of Snoopy was made to honor the 50th anniversary of the moon landing.

Wind not quite a factor

CBS New York weather anchor Lonny Quinn, who is on the ground at the start of the parade route, measured the winds at less than 10 mph. However, he has measured gusts as high as 29 mph. Both speeds are safe for the balloons, but the wind speeds are expected to increase throughout the morning.

Latest weather for the parade

As of 7:40 a.m. this morning, New York City officials have not yet made a decision about the giant balloons at the annual Macy’s Thanksgiving Day Parade. They have stated a decision will be made right before the celebration starts.

Outgoing New York City Police Department Commissioner James O’Neill says he’s an “optimist” and is still hopeful the balloons will be featured in this year’s parade.

Parade officials and New York City police are keeping an eye on wind gauges along the 2.5-mile (4-kilometer) parade route that snakes through Manhattan. If wind speeds reach dangerous levels, the 16 helium balloons including Smokey Bear and Snoopy could be brought down to float at a lower level or even taken out of the parade altogether.

The National Weather Service is projecting sustained winds of up to 24 mph (39 kph) with gusts to 40 mph (64 kph) during the parade.

New Balloons for the 2019 Parade

Weather permitting, here are some of the new balloons to watch for today:

The NYPD will have thousands of officers stationed along the parade route. They include counterterrorism teams with long guns, plainclothes officers mixed in with the crowd and about three dozen explosive detection K-9s. The department also plans to fly a drone to monitor the parade route.

All spectators will be screened with metal detectors at security checkpoints. Certain areas near the start and finish are off-limits or will have space taken up by staging for NBC’s live broadcast.

Police cars and sand-filled sanitation trucks are being positioned to stop vehicles from driving into the crowd and technology is being used to detect drones, which are illegal to fly over crowds in New York City.

Counterterrorism Chief James Waters said the technology detected several drones flying in the vicinity of the United Nations General Assembly gathering in September. They were all non-hostile, he said.

Will the parade balloons fly today?

Will the balloons be grounded? With high winds threatening to ground the balloons, that is the question on everyone’s minds leading up to the 93rd Macy’s Thanksgiving Day Parade.

“It’ll be a game-day decision on what we’re going to do with the balloons,”  Chief of the New York Police Department Terence Monahan said at a Wednesday briefing on the police department’s parade safety measures. “At the end of the day, public safety is paramount, and we want everybody to enjoy the event.”

The balloons were inflated Wednesday night in the staging area near the start of the parade route on New York’s Upper West Side. If they’re allowed to fly this year, the intensity of the wind will determine how high they soar. Each balloon has a distinct risk profile, which factors in its size and weight and details the optimal altitude for a given wind speed.

The weather forecast for the the parade this morning calls for a mix of clouds and sun with a temperature of 46 degrees. Winds will come in from the west at about 23 mph, with gusts up to 35 mph. This is the threshold for restricting the balloons.

The danger with westerly winds is that every cross street the parade passes, brings the chance for strong winds. Some of the balloons have up to 90 people holding the ropes so the balloons do not blow away.