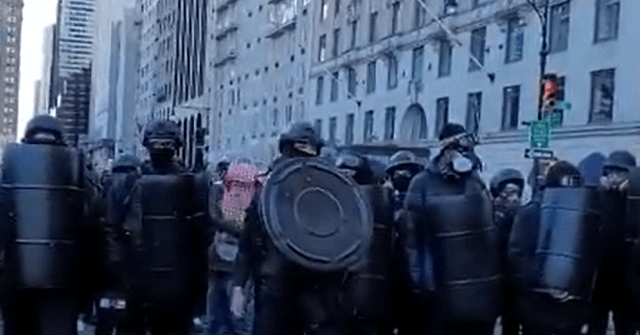 A large group of Antifa and Black Lives Matter demonstrators wearing black bloc and carrying shields marched in the streets of Manhattan on Sunday. While the group remained mostly peaceful, a female social-media journalist came under attack for “supporting Trump.”

A group of about 25 demonstrators wearing black bloc and carrying defensive shields formed up in an intersection in Manhattan to begin a march to Times Square, independent journalist Andy Ngo revealed in a video from journalist Dean Moses.

A militia of #antifa black bloc carrying shields marched in Manhattan today to claim ownership of the public space. pic.twitter.com/qRj25Uyreo

A large mob of #antifa are currently marching with riot gear in the streets of New York City. pic.twitter.com/28CuKsgHJR

As the march proceeded it grew in numbers.

Social-media journalist Tara Szczepanski reported being assaulted by some from the rally. She reported having an egg smashed on the back of her head.

In the video she tweeted, she is assaulted by at least two of the men. One sprayed her with a chemical string and another appeared to strike her with a skateboard.

Attacked at a #BLM #Antifa #NyC rally, smashed egg in my head, hit with umbrella, spat on, knocked with a skateboard as the crowd says don’t protect her she’s for Trump. pic.twitter.com/hpSTdIaZt2

“She’s a f**king Nazi,” some in the crowd shouted. “She supports Trump, why are you protecting her.” Then the man with the skateboard appeared to strike her.”

A second video shows her being harassed and attacked by a larger group. A person outside of camera-view reaches in and smashes an egg on the back of her head.

Footage caught across of when I was trying to get away, and I’m screaming to get off me, they hitting me with the umbrella and then knock my equipment, when I picked it up they smashed the egg and hit me in the head, then knocked my phone off. #BLM #Antifa #TrumpSupporter #NYC pic.twitter.com/JOh3t2QGeM

Szczepanski rushed to nearby NYPD police officers and appears to be assaulted again — in view of the cops. She said they “they told me to stay 6 feet from them and let me be attacked.”

I ran to the #NYP for help they told me to stay 6 feet from them and let me be attacked. pic.twitter.com/otVQaY9R0V

In the video, a man wearing a cop costume and a pig mask is seen pushing a microphone in her direction. That man is seen in another video harassing police officers trying to maintain the peace.

One NYPD officer is trying to ask his brothers which of them are proud boys, but they’re not very responsive pic.twitter.com/SslRdMjPAH

Bob Price serves as associate editor and senior news contributor for the Breitbart Texas-Border team. He is an original member of the Breitbart Texas team. Price is a regular panelist on Fox 26 Houston’s Sunday-morning talk show, What’s Your Point? Follow him on Twitter @BobPriceBBTX, Parler @BobPrice, and Facebook.