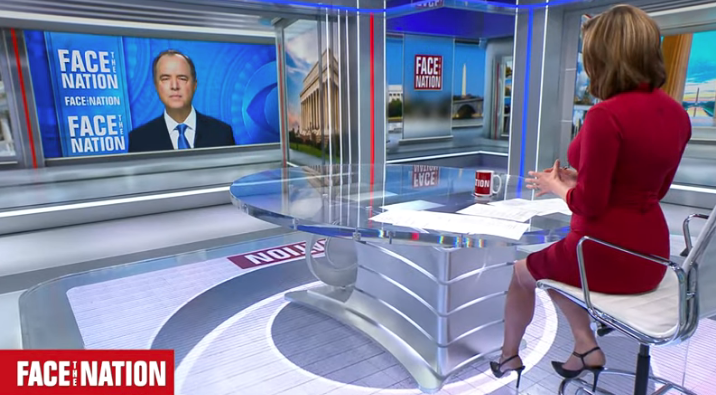 House Intelligence Committee chairman Adam Schiff provided few details of Monday’s writing of articles of impeachment against Donald Trump, but did not say during a television interview Sunday morning on whether he would vote for impeachment.

CBS News’s Fact the Nation host Margaret Brennan pressed the California Democratic congressman, who has helped spearhead the impeachment inquiry into Trump, about what exactly he expects from Monday’s House Judiciary Committee hearing to finalize charges against the president. Schiff said he is going to wait until the Judiciary committee releases their exact articles of impeachment before deciding whether or not he will decide to vote in favor of charging Trump with obstruction of justice, abuse of power or any other potential alleged crimes.

“First off all Margaret, [the Republicans] released [military aid to Ukraine] because they got caught, because a whistleblower blew the whistle and because Congress announced an investigation and only thereafter and almost immediately thereafter were they forced to release the aid. So that’s not much of a defense, getting caught.”

Top Republicans have long accused Schiff of single-handedly leading the charge for impeachment against Trump.

“But in terms of my own recommendations, look I’m going to see what articles come out of the Judiciary Committee deliberations. I’ll make my views known at that time,” Schiff added.

Brennan then questioned exactly what specific, legal articles of impeachment he is looking for ahead of Monday’s hearing. However, Schiff offered few details about what he expects to come out of the Democrat-controlled Judiciary committee.

“All the [committee] chairs have weighed in with [House Judiciary Committee] chairman [Jerry] Nadler and his staff as to what we think would be appropriate in this set of articles, I can’t go into those particular discussions,” Schiff said.

“But I can tell you as a former prosecutor that it’s always been my strategy in a charging decision, and an impeachment by the House is essentially a charging decision, to charge those that there is the strongest and most overwhelming evidence and not try to charge charge everything, even though you could charge other things, so that’s my guiding philosophy,” Schiff continued.

“I think we should focus on those issues that provide the greatest threat to the country,” the California Democrat added.

Meadows echoed a Sunday morning tweet from Trump accusing Democrats of “changing the impeachment guidelines” in order to ensure they can “win the game.” Meadows also claimed Democrats are trying to “change what impeachment is all about.”

But earlier in the program, Schiff doubled down on his belief the impeachment inquiry has amassed plenty of evidence pointing to Trump’s alleged wrongdoing and forcing a quid pro quo situation with Ukraine.

“There is overwhelming evidence that the president sought to coerce Ukraine into interfering in our election, essentially sought to cheat in our next election by getting a foreign government to weigh in,” Schiff said Sunday. “That is a very serious business and it imperils our national security. It’s a gross abuse of his office and the president also deeply sought to obstruct the investigation into that wrongdoing, and I think that is indicative of the offense here.”