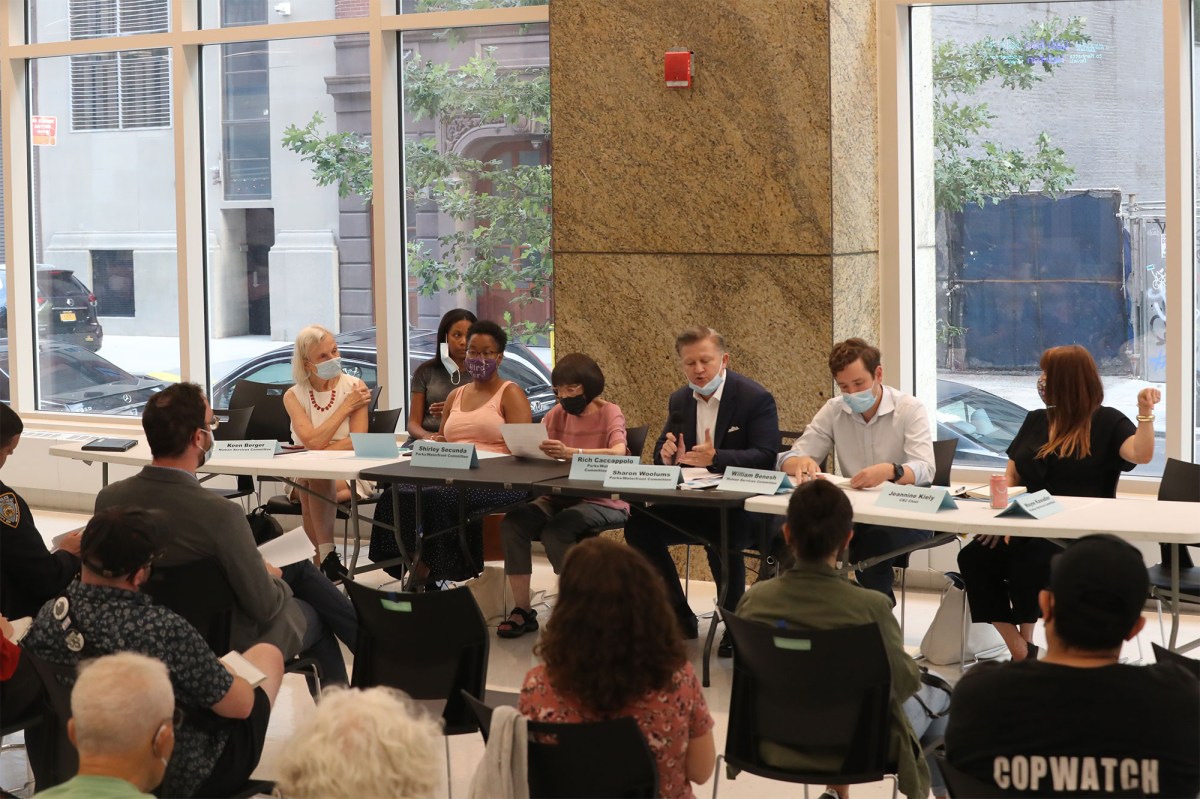 A Greenwich Village community board meeting descended into chaos Wednesday night as anti-cop protesters repeatedly yelled at local officials and NYPD officers — at one point calling the commander of the local police precinct “a racist piece of s—t.”

The unruly attendees argued with officials and older local residents about whether or not cops should crack down on late-night, wild parties inside Washington Square Park at the Community Board 2 meeting, which was promoted by police oversight activists.

A majority of participants were rowdy and disruptive as they accused cops of targeting minorities and using excessive tactics to enforce a midnight curfew in the park.

NYPD Captain Stephen Spataro, the commanding officer of the 6th precinct, was called a “racist piece of s—t” who will “go to hell,” as protestors shouted at a joint-panel of local officials comprised of CB2 representatives from the Parks and Waterfront committee and Human Services committee.

Spataro said major incidents of crime and vandalism have decreased since July 1, thanks to an influx of cops who maintain a presence in the park, especially near the famed Arch.

“We’re not looking for enforcement,” Spataro said. “We’d like to get through the night with no arrests, no summonses, we’re there just to make everyone feel safe, but we will [make] arrests when need be. Our goal is that our presence there will deter any issues.”

Gia Lisa Krahne, a director of Alchemical Studios, an art and theatre business on West 14th Street, claimed she was a victim of police brutality when she was in the park past the 10 p.m. curfew that was at times enforced in the spring.

“The captain speaking about the presence of the police, as if this is something that makes everyone feel safe,” Krahne said.

“But they are having a hundred police out there from after 8:30 p.m. many times on militarized bicycles. On June 5, I was the first person brutally arrested. I was not there to protest. It was 10:05 p.m., and five men pulled me forward, and threw me facedown on the ground, and bloodied my friend that was next to me while I was walking backwards.”

In response, Spataro said police repeatedly warned people in the park they would be arrested if they did not comply with the curfew, and noted dozens of officers have been attacked in recent months.

David “Shaman Ortiz, 28, who credited himself with starting the recent wave of parties and unlicensed boxing matches in the park, said he and fellow members of the “Be Outside Crew” are providing a community service.

“What we do is we amplify the sound and the communication of the community that’s already been there in Washington Square Park for forever,” Ortiz said.

“And yes, I was arrested for this. And yes, just three days ago my case was dismissed for being arrested for amplified sound. Wanna know why? Cuz it’s bull,” he added.

At one point during the chaotic meeting, Ortiz run up to a table where panel members were seated and yelled in the officials’ faces.

“I know I’m out of turn, according to the Bluebook rules, but I just found what you did to be very intimidating, coming straight at me. I did not appreciate that and I thought it was incredibly rude and intimidating and I just wanted you to know that,” Georgia Silvera Seamans, of the Parks/Waterfront Committee, said after Ortiz charged up to the panel.

Longtime local residents fired back at the rabble-rousing revelers — the majority of whom commute to party in the park from outside the gentrified neighborhood.

“There’s been plenty of irrational stuff going on. I’d like to think I’m being reasonable; I think most of us would like to be reasonable,” Bill Warren, 69, said. “It’s not reasonable to have 200 decibels at 2 a.m. every night.”

One local resident said she now avoids Washington Square because of rampant drug use and homelessness.

“I have lived in this neighborhood for 45 years, I don’t walk near that park now. I stopped doing that probably about five or six months ago because I was so disturbed by what I was seeing here, and the things that I was hearing from the neighborhood,” Mary Quinlan told the crowd.