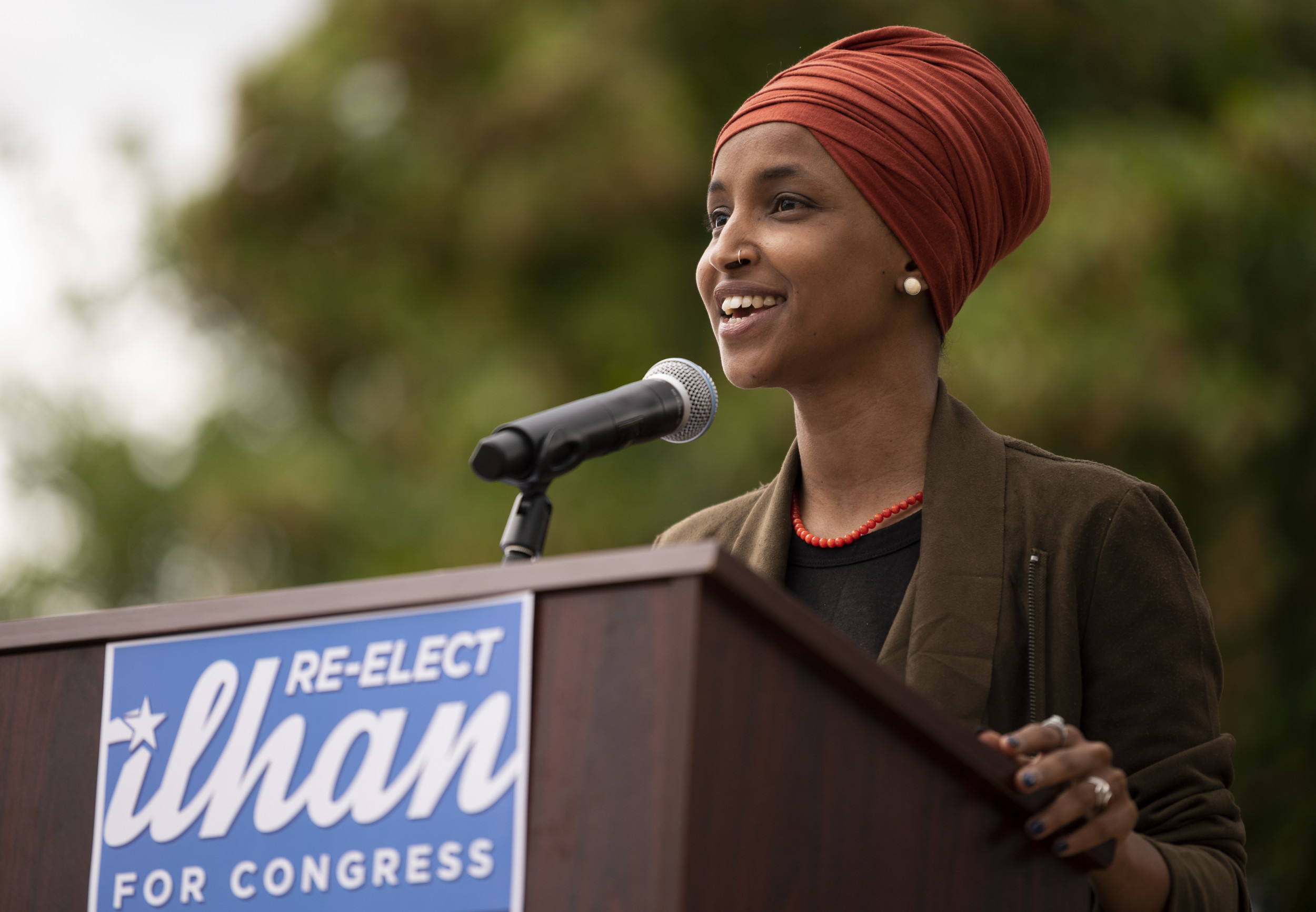 Rep. Ilhan Omar (D-MN) has gotten quite good at shifting the Overton window for what is acceptable to say as a member of Congress. At this point, she has a well-established pattern: First, throw out something remarkably offensive. Then, let other liberals rush to her defense, thereby confirming that they, too, are actually okay with what she said, before avoiding censure by finally offering a feeble/partial “clarification” or apology, for having been “misunderstood” or having misspoken.

This cycle played out again this week. On Monday, Omar proudly shared a tweet in which she implicitly equated the United States and Israel to the Taliban and Hamas, claiming that they had all committed “unthinkable atrocities.”

On Wednesday, a dozen of her Democratic colleagues in the House issued a statement condemning her comments as offensive and misguided, and urged her to clarify her words. Almost immediately, Omar, along with fellow Squad members Congresswomen Alexandria Ocasio-Cortez (D-NY) and Rashida Tlaib (D-MI), rushed to smear anyone who dared take offense at being compared to terrorists as racist and Islamophobic. Congresswoman Omar herself remained defiant, calling the signatories of the letter—fellow Democrats—”shameful,” and accusing them of constantly harassing and silencing her.

All of that was to be expected, as was Rep. Omar’s subsequent clarification on Thursday morning, in which she suddenly changed her tune and tried to distance herself from the original tweet.

In the process, Rep. Omar also awkwardly distanced herself from the defenses of her fellow Squad members, who continued to defend her on substantive grounds by pretending that Omar was being vilified just because she was standing up for “human rights” or because she was Muslim.

Once again, as is her wont, having started a conversation that should have been dismissed as ridiculous out of hand—a conversation in which American politicians are debating whether it is racist to be offended by someone comparing the U.S. and its allies to terrorists—Rep. Omar took a quiet step back and feigned innocence. “To be clear: the conversation was about accountability for specific incidents regarding those ICC cases, not a moral comparison between Hamas and the Taliban and the U.S. and Israel,” she conceded. “I was in no way equating terrorist organizations with democratic countries with well-established judicial systems.”

This non-apology is unconvincing; her tweet speaks for itself: “We have seen unthinkable atrocities committed by the U.S., Hamas, Israel, Afghanistan, and the Taliban,” Omar said very clearly.

Rep. Omar is sophisticated enough to make radical statements while also obfuscating their true nature by tying them to a conversation in which she says the same thing in a slightly less offensive context. In fact, she is genuinely good at this game of plausible deniability. She did something similar when she was called out for antisemitic comments in 2019.

But what was different this time was how the Democratic leadership reacted. It appears that Omar’s provocations may have finally gone too far for the establishment to ignore.

And this is new. Over the years, Omar has had several close encounters with accountability. On multiple occasions, she has even been called out by members of her own party for her anti-American and antisemitic statements. But so far, she has escaped any real consequences for her actions, because each and every time the leadership of her party has backed down from offering a full-throated critique of her views, apparently deciding that the need for a united political front outweighed the necessity of calling out a problematic member.

This time, the entire leadership team of the Democratic Party issued a rare joint statement confirming that they do not stand with Omar on this issue, and that her statements are unequivocally unacceptable. In no uncertain terms, they wrote that “drawing false equivalencies between democracies like the U.S. and Israel and groups that engage in terrorism like Hamas and the Taliban foments prejudice and undermines progress toward a future of peace and security for all.”

While the Squad will undoubtedly continue to cry foul with allegations of how Rep. Omar is being silenced, nothing could be further from the truth. The response by Pelosi and her team was entirely appropriate from a free speech perspective: No one silenced Omar, and no one made the claim that she should not be allowed to say whatever she feels, however repugnant. The Democratic leadership was correct to use its own counter-speech to educate their constituents about why what Omar said was so offensive, and therefore contradictory to Democratic values.

Offensive speech should never be silenced; it should just be labeled correctly, so that we preserve a sense of shared values.

Thank goodness the Democrats have finally taken a stand and done that. Let’s hope they mean to keep doing so.

The views in this article are the writer’s own.