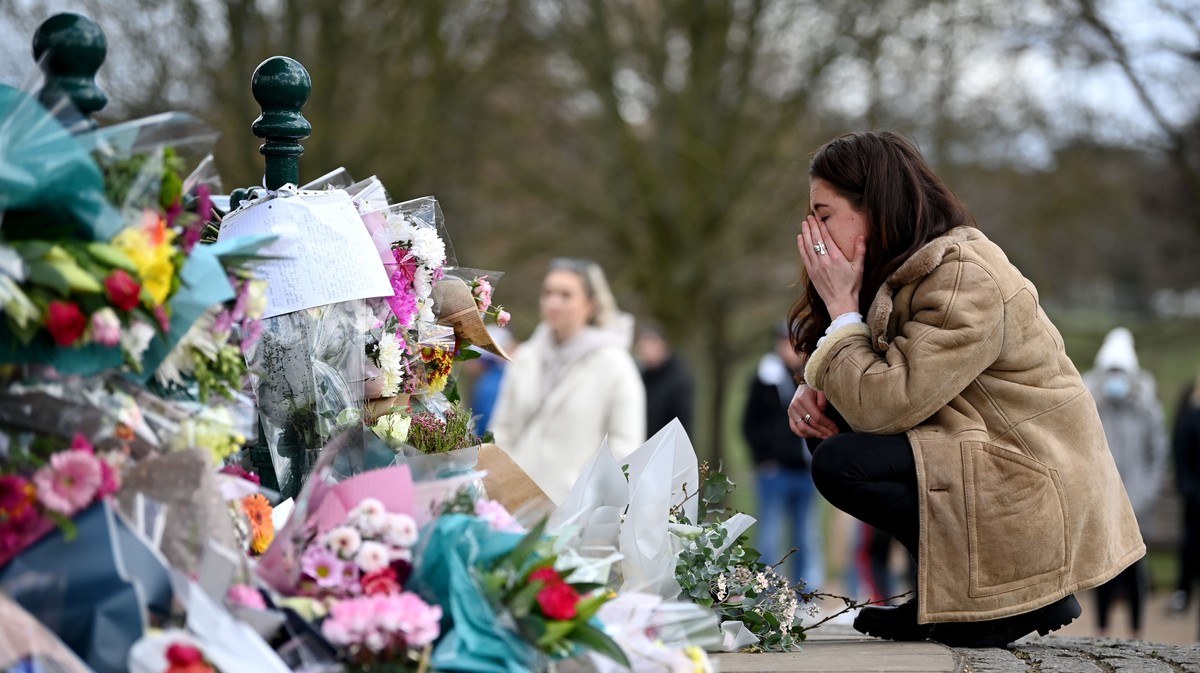 A woman reacts as she lays flowers in tribute to Sarah Everard at the bandstand on Clapham Common on March 13, 2021 in London, United Kingdom. (Photo by Leon Neal/Getty Images)

Want the best of VICE News straight to your inbox? Sign up here.

After weeks of outrage over the rape and disappearance of Sarah Everard, a woman who vanished in March while walking home in London, the truth finally emerged this week: It was a cop all along.

On Tuesday, Metropolitan Police constable Wayne Couzens pleaded guilty to kidnapping and raping Everard, whose body was found a week after her initial disappearance. Although he didn’t plead guilty to her murder, he did admit responsibility for the killing, the Guardian reported.

Justice for Everard may be unfolding in the UK, but the entire case resurfaces the queasy reality that sexual violence by police is also all too common in the United States. Although researchers caution that we only know about the “tip of the iceberg” when it comes to police sexual misconduct, studies indicate that sexual predators often lurk in the police force. On the very same day that Couzens pleaded guilty, a police officer in Little Rock, Arkansas, was charged with sexually assaulting a woman.

“People read the story in their local newspaper. They see it on the evening news. They think, ‘Well, that’s horrible, but that’s a one-off.’ They don’t think much of it after that,” said Philip Stinson, a professor at Bowling Green State University and a famed researcher on police who commit crimes. “It’s not until you aggregate this stuff that you realize, ‘Oh my gosh.’”

A 2014 study led by Stinson analyzed the arrests of nearly 400 officers, employed across 43 states and Washington, D.C., for sex-related crimes between 2005 and 2007—just three years. Beyond uncovering 118 cases of rape, the study found that nearly three-quarters of all the cases involved victims who were younger than 18.

“These findings seem to indicate scenarios in which adults allowed police both access and the opportunity to victimize children under their care,” the study states. “That is, caregivers may be prone to ‘let their guard down’ in the presence of police in a manner that evokes the infamous scandals involving Catholic priests and the wide-scale sexual abuse of minors.”

Just last week, a New Jersey police officer was arrested on accusations that he’d sexually assaulted a teenaged relative multiple times between May 2019 and April 2021, starting when she was just 14. Last month, a Massachusetts cop was convicted for sexually assaulting a child younger than 14. In April, an Oklahoma man pleaded guilty to sexually abusing a child. At the time of the abuse in 2019, he, too, was a police officer.

Cops so often abuse 14-year-olds, in particular, Stinson said, that he’ll sometimes hear one of his research assistants mutter under their breath, “Oh my god, another 14-year-old.”

In another study, published in 2020, Stinson and his team once again found that sexual misconduct is rife among police. This time, they identified 669 cases of police sexual violence that occurred between 2005 and 2012. In more than 80 percent of the cases, the cops committed the offense while they were on-duty; almost 10 percent of the cases involved officers with at least 18 years’ experience on the force.

This 2020 study singled out two additional groups of people who were frequently targeted by police officers: women who dare to drive—a trend the researchers called “driving while female”—and women who cops believed to be sex workers. But the ubiquity of the “driving while female” cases didn’t mean that they’re taken seriously. Just under half of the cops arrested in those cases lost their job.

Jay St. James, a sex worker in Eugene, Oregon, told VICE News in April that a local police officer stalked and raped her after she tried to report her former partner for domestic violence. That officer has not been charged, as of April, while St. James was arrested for protesting outside the police station.

In his work, Stinson has repeatedly suggested that police work, by its very nature, engineers opportunities for police to take advantage of the people they’re meant to protect.

“Police routinely operate alone and largely free from any direct supervision, either from administrators or fellow officers,” the 2014 study noted. “Police commonly encounter citizens who are vulnerable, usually because they are victims, criminal suspects, or perceived as ‘suspicious’ and subject to the power and coercive authority granted to police. Police-citizen interactions often occur in the late-night hours that provide low public visibility and ample opportunities to those officers who are able and willing to take advantage of citizens to commit acts of sexual deviance and to perpetrate sex crimes.”

The case of Daniel Holtzclaw, may be the most infamous cop-turned-sexual assailant in the U.S., perhaps perfectly captures this dynamic. In 2015, after 13 women accused the former Oklahoma City police officer of sexual assault, Holtzclaw was convicted on 18 counts and was sentenced to more than 260 years in jail. His victims were Black women who lived in one of Oklahoma City’s poorest neighborhoods and had criminal records that rendered them, in Holtzclaw’s eyes, unreliable witnesses, according to prosecutors.

Just this week, a former police officer died by suicide in Denver, Colorado, while in the midst of a sexual assault trial. He’d been accused of sexually assaulting a woman in 2018, after he offered to give her a ride home while on duty. After that first woman came forward, two others said that he had assaulted them, too. In one case, the woman said that he threatened to charge her with public intoxication if she didn’t get in his car.

“It’s hard to get a handle on, because many of these crimes go unreported. Victims are terrified at coming forward,” Stinson said. “There are these horrific stories of typically women and girls—but sometimes men and boys—showing up at the police station to make a report and then the sergeant assigns the rapist to take a report.”