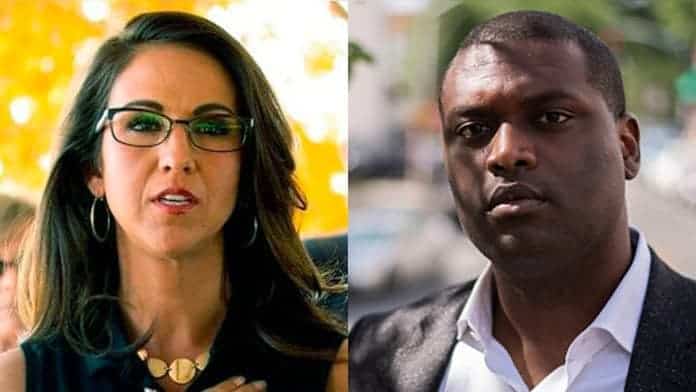 Rep. Mondaire Jones (D-N.Y.) demanded the expulsion of Rep. Lauren Boebert (R-Colo.) from Congress in a now-deleted tweet after a social media post falsely claiming a 2019 image depicted her with individuals who stormed the U.S. Capitol made the rounds on the internet, Fox News reported Wednesday afternoon.

Sharing the post supposedly connecting Boebert to those who assaulted the Capitol one week ago, Jones wrote “Expel her.” The picture, however, was originally from an article published in December 2019 by the Colorado Times Recorder, as Will Sommer of The Daily Beast observed.

Neither Jones nor Boebert have commented publicly on the story at the time of publication.

Both Boebert and Jones, who are freshmen members, are already making names for themselves in Washington, D.C.

Jones is increasingly seen as an ally of “The Squad” of progressive House Democrats such as Reps. Alexandria Ocasio-Cortez (N.Y.), Ayanna Pressley (Mass.), Ilhan Omar (Minn.), and Rashida Tlaib (Mich.).

Boebert, on the other hand, has defined herself as a dedicated ally of President Donald Trump and has received criticism for insisting on carrying a firearm on Capitol Hill grounds.

The Colorado Republican has also turned heads for slamming the heightened security measures inside the Capitol such as the metal detectors at the entrance to the House chamber.

“I am legally permitted to carry my firearm in Washington, D.C. and within the Capitol complex,” Boebert tweeted Tuesday. “Metal detectors outside of the House would not have stopped the violence we saw last week — it’s just another political stunt by Speaker Pelosi.”

The first-term congresswoman refused to let police look through her bag after she set off metal detectors on Tuesday, according to Colorado Public Radio. Prior to this, Boebert requested access to a gun locker from Captiol Police but they turned down her request, the Colorado Times Recorder reported. According to Fox News, lawmakers are supposed to limit carrying firearms to their personal offices.