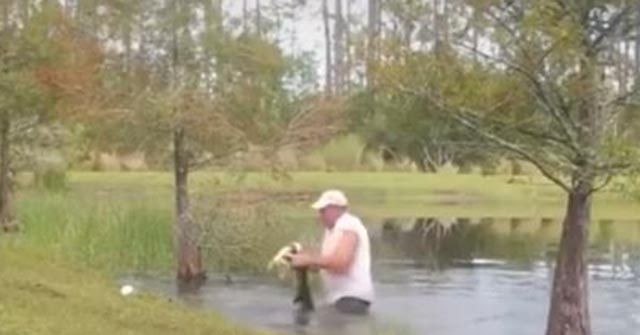 A Florida man came to the rescue when he rushed to save his puppy from the jaws of an alligator, according to a video.

Owner Richard Wilbanks says adrenaline and his instincts kicked in when the alligator grabbed his dog, Gunner, and dragged him into a pond, KMOV reported.

Wilbanks immediately jumped into the water to save his beloved canine companion.

“He just came out like a missile,” Wilbanks said.

Wilbanks pried open the alligator’s mouth to save Gunner, according to the video.

“He had just one little puncture wound,” Wilbanks said. “My hands were just chewed up.”

Even after being dragged underwater by the alligator, “Gunner is doing just fine,” according to KMOV.

Gunner is scared to go near the water now, but Wilbanks says the incident was a learning experience for him. He is keeping a close eye on Gunner by keeping him on a leash and away from the water.

“I would like to emphasize for people that have pets is to make sure that they keep them away from the edge of the water,” Wilbanks told WINK.