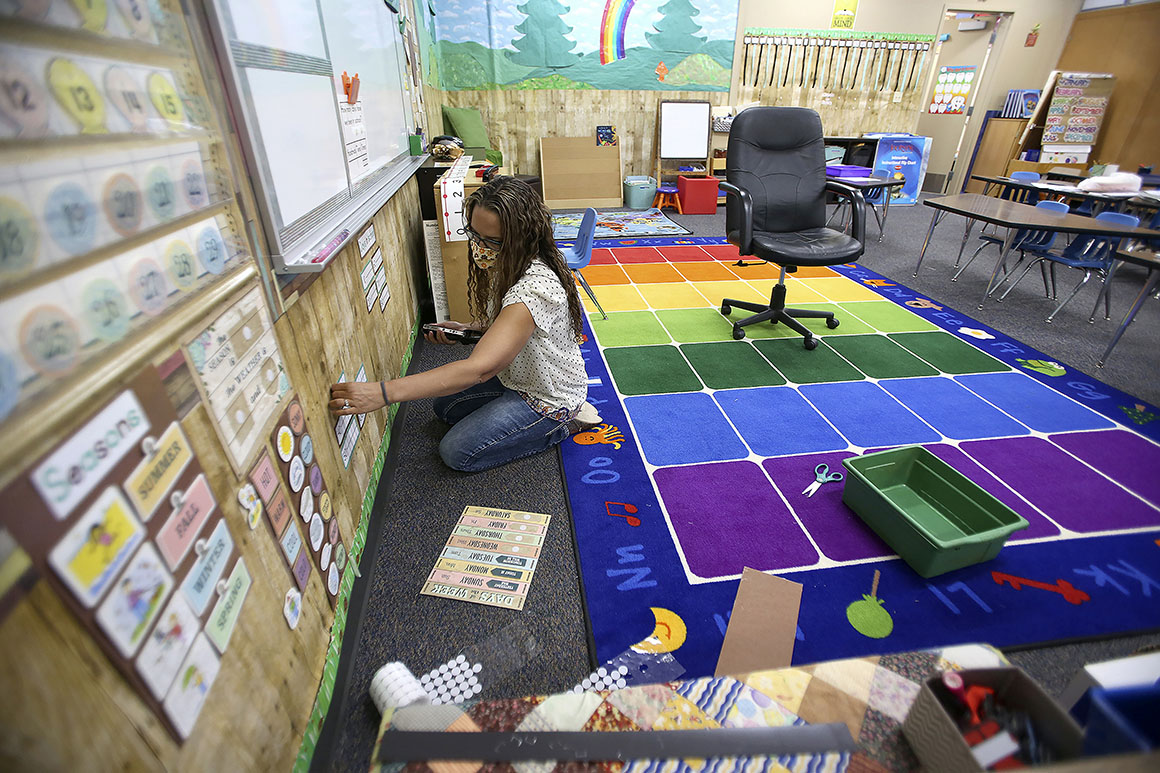 It’s simple, he said. Prioritize opening schools. Keep restrictions on everything else in place.

That may be starting to sink in. After shuttering schools Thursday because of coronavirus infection rates outside of schools, New York City Mayor Bill de Blasio said to expect orders closing indoor dining and gyms. In New Jersey, Gov. Phil Murphy is adamant that schools will remain open even if businesses are forced to close because of a surge in cases.

In Ohio, Gov. Mike DeWine imposed a curfew on businesses Thursday and recently implored people to wear masks or take responsibility for being the reason schools are shuttered. He also said he would veto a bill that would curtail his ability to impose a shutdown. Democratic leaders in California — where some private schools are open, but even in cities with low infection rates public schools are closed — have labeled the situation state-sanctioned segregation, in a break with union allies. The governor’s children are attending in-person classes at a private school.

A new report from UNICEF said child-to-child transmission of the coronavirus in schools was “uncommon and not the primary cause” of infections among children who caught the virus while attending school, based on a July assessment of 31 countries. Children were more likely to get infected outside of school settings.

Gathering students and teachers under the same roof isn’t foolproof. The virus can spread that way, though Rubin said student-to-student and teacher-to-teacher spread are the most likely scenarios. But research shows they aren’t what is triggering the surge of cases across the nation or around the world. The UNICEF report said that as of this month, in 87 countries children and adolescents under age 20 accounted for one in nine Covid-19 infections, or 11 percent of the 25.7 million infections reported by these countries.

“We will bring our schools back but we’re going to have to reset the equation,” De Blasio said Thursday. “Parents, I’m going to tell you right now, we’re going to need you to take an active role in helping us reopen schools. [Some] honestly might feel somehow a little better if they knew indoor dining was going to be closed or gyms were going to be closed. I’m sorry to tell you that for the sake of those business owners and everyone who loves those gyms and loves indoor dining, it’s just a matter of time. It’s very likely to be in the next week or two.”

Randi Weingarten, president of the American Federation of Teachers, noted that as much as parents have been upset by the city’s shutdown of schools, New York and its teachers should get credit for reopening in the first place. Many of the country’s other large, urban districts have punted on in-person education until at least January.

“Let’s give New York City a break here,” Weingarten said. She added that she finds it reassuring that the city reopened, offering hope for school systems elsewhere. “It gives me a lot of confidence.”

What has to change, she said, is the behavior of people outside of schools and the inertia on Capitol Hill for an aid package that would help not only schools, but bars and restaurants, which would then not need to reopen to survive. “Nobody wants the situation that’s happened right now. It’s a setback. Let’s change behavior to lower the curve again.

“I don’t want to give up on the second semester.”

Community spread, or even in-school transmission, isn’t shuttering schools everywhere. In New Jersey, Murphy said unequivocally last week “we are not closing our schools,” but even as new coronavirus cases topped 4,000 for three days this week, Murphy has been holding steady, telling CNN’s Wolf Blitzer on Wednesday, “I honestly can’t see a scenario” where the state closes schools before indoor dining and gym facilities.

Schools’ ability to teach students in person isn’t governed just by percentages and statistics about coronavirus spread in the community, however. When teachers and students are exposed within school buildings or outside of them, most schools require they isolate themselves for up to two weeks. Substitute teachers, often in short supply in non-pandemic times, become harder to come by.

“Probably two to three times a week in all of our buildings, we’ll have classes that are uncovered,” said Tracey Miller, the superintendent of the New Richmond Exempted Village School District in Ohio. He was speaking in a video message to parents Wednesday, during which he said students will shift to remote learning for two weeks starting Monday. He said hundreds of students and staff members in the district are isolating for 14 days because of exposure to someone with a positive test.

“For four months it was fantastic,” Miller said. The district reopened for in-person classes in August but also offered parents a fully remote option if they didn’t want to send students to brick-and-mortar buildings.

The district needs to stop, at least temporarily, to try to reset.

“No plan will fit every household and every situation. We’re trying to have a positive impact on the largest majority that we can.”