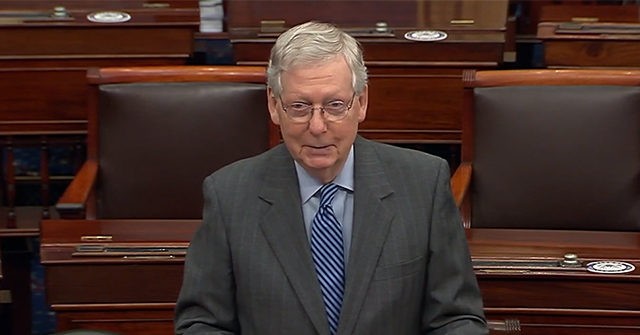 Senate Majority Leader Mitch McConnell (R-KY) said on the Senate floor Monday night that America is a “constitutional republic,” and the government’s “legitimacy” does not arise from the left’s “feelings.”

McConnell said before the confirmation of Judge Amy Coney Barrett to the Supreme Court, “Our Democratic colleagues keep repeating the word illegitimate as if repetition would make it true …We’re a constitutional republic. Legitimacy does not flow from their feelings.”

He also said that Democrats now “see legitimate defeat as an oxymoron.”

“The louder they scream, the less accurate they are,” he added.

Sen. Josh Hawley (R-MO) also slammed leftists’ attacks against Barrett during her confirmation. He said on the Senate floor:

The nomination of Amy Coney Barrett is truly historic. This is the most openly pro-life judicial nominee to the Supreme Court in my lifetime. This is an individual who has been open in her criticism of that illegitimate decision Roe v. Wade. This is a nominee who has been open about her faith and her faith commitments and the way she and her husband live their lives immersed in their Catholic faith and raise their children in their Catholic faith and want others to have the freedom to be able to do the same.

And her nomination, and I anticipate her confirmation, tonight, in just a few hours on this floor, will show that there’s nothing wrong with any of that.