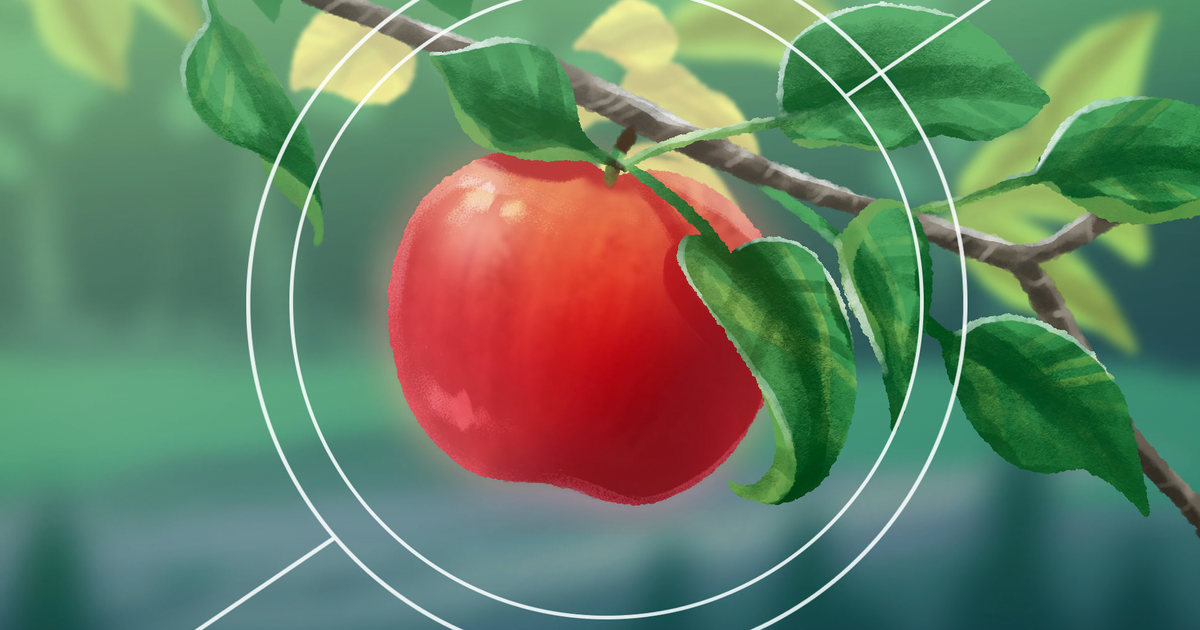 Collectively, they’re a culmination of decades of work by apple breeders, who are out in orchards around the world, testing out apple trees by the thousands to create new varieties that are delicious, store for a long time, more disease-resistant, put less physical strain on growers, and less resource strain on the land where they grow.

In Geneva, New York, Cornell’s College of Agriculture and Life Sciences AgriTech tests around 50 acres of apple trees under the purview of Dr. Susan Brown, a Cornell University professor and the head of Cornellâs storied apple breeding program that began in 1880.

âYou plant out apples and it’s like they scream, they just want to be diverse,â she said.

Apples have a propensity to jumble up their own genes, Brown said. If you take a McIntosh apple and plant the seeds inside of it, the resulting trees won’t produce McIntosh apples.Â

Creating new apples in a controlled way, which involves cross-breeding two kinds of apples to produce hybrid seeds, is a long process with a low chance of success. For a little perspective, the SnapDragon apple that came out of Cornell in 2013 was the programâs fastest release.

From Geneva, if you drive west on Interstate 90 for 2,500 miles you’ll reach Wenatchee, Washington. Dr. Kate Evans, a Washington State University professor and breeder in the WSU Tree Fruit Research and Extension Center, said she plants about 15,000 to 20,000 unique cross-bred seeds here a year.

Washingtonâs program began in 1994 and had its first wide release, the Cosmic Crisp, in 2017. Evans said that part of the impetus for the program was to create an apple suited to the town known as the Apple Capital of the World and its surrounding arid region.

âEvery apple that was grown here, even though we are the major U.S. producer, was bred and selected for other environments where there were other challenges,â she said. âHere we are in this pretty unique climate for growing apples and nothing had been selected for this particular unique climate.â

Breeding apples takes a lot of time and energy, but for breeders, growers, and apple eaters alike, developing new varieties is a crucial part of the continued cultivation of the United Statesâ most consumed fruit.

On an early October day at The Orchards of Concklin in Pomona, New York, farmer Scott Hill rifled through a crate of RubyFrosts and a crate of SnapDragons, both released by Cornell in 2013. The RubyFrosts were plump and deeply red. The SnapDragons were a little taller with a lighter complexion and more green and yellow splotches. Under that skin lies some of the tastiest apple you can have the pleasure of biting into. They’re Hillâs favorite.

About 30 yards away grow rows of Macoun trees. Theyâre notably taller than the dwarf trees growing the latest apples and many older varieties like Honeycrisp and Gala that make up about two-thirds of the entire orchard. Macouns were released out of Cornellâs breeding program in 1923. While tasty, they have a short season (just three weeks) compared to other, newer varieties.

âIn 20 years, you’re not going to be able to find Macouns,â Hill said, noting the short window of profitability. âIt’s simple math at the end of the day.â

Mark Lagoner, a farmer who grows apples in Williamson, New York, has two of Cornell’s three newest varieties: Pink Luster and Firecracker. At they have about 150 trees of each apple, he said. They pick and press Firecrackers themselves to make hard cider while the Pink Lusters are popular among U-Pick visitors.

âThe crunchiness, the flavor, the hue; it’s a nice size apple,â he said. âIt has the Honeycrisp characteristics. Everybody likes that. Pink Luster has a lot of that.â

The Honeycrisp, the third most produced apple in the U.S. according to the U.S. Apple Association’s 2019 report, is another product of breeding. It was released out of the University of Minnesotaâs breeding program in 1991 and slowly grew in popularity. The Pink Luster is a cross between a Honeycrisp and a Gala.

To begin breeding a new apple like the Pink Luster, breeders start by looking at different applesâ traits they want to combine to make a crossbreed that contains the best attributes of two parent apples, sometimes looking at DNA markers to target certain desirable genes. Kate Evans explained that with a hypothetical.

âWe want ultra crispness, so let’s use Honeycrisp and let’s use something else,â she said. âMaybe we want to increase its firmness so we might use Cripps Pink.â

Taste, texture, and color are important traits for breeders as are more hidden characteristics, like disease resistance or the ability to hold up in storage for months.Â

To create a cross-breed between two parent apples, breeders take a cue from pollinators like bees and butterflies. Pollinators use flowers as a food source, and in a symbiotic exchange their bodies collect pollen from the blooms. When they bop over to another flower, they drop the pollen off from the previous flower. Flowers have little parts at the center of their blooms called stigmas that collect the deposited pollen and use it to fertilize their reproductive egg cells. Once fertilized, those egg cells become seeds. All flowering plants reproduce by sharing pollen, and apple trees are flowering plants.

âWe’re doing what bees do but in a more controlled way,â Evans said. Breeders arenât splicing together apples in labs. Theyâre out in the fields doing it the same way people have been doing it for hundreds of years.

Those cross-bred seeds are planted and grown into seedlings. To quicken the growing process and reduce land usage, parts of those tiny cross-bred seedlings’ shoots called scions are cut off and grafted onto rootstock.

Rootstocks make up the bottom root systems and trunks of apple trees and are bred independently from scions, Gennaro Fazio explained. Fazio is a plant research geneticist at the USDA Agricultural Research Serviceâs Plant Genetic Resources Unit in Geneva, New York. Heâs been breeding rootstocks there since 2001.

Just like the cross-bred apple seedlings, rootstocks are themselves apple trees, but they aren’t bred to produce tasty fruit. They’re bred with focuses on disease resistance, shorter height, and longevity.Â

Like the process to produce scions, rootstocks are cross-pollinated to get these desired traits, but Fazio doesn’t do it by hand.

âWe do it the cheap and simple way,â Fazio said. âWe just take two of the rootstocks that we want to be parents, we cover those plants up with a big tent that is bee proof, and we put bee hives inside, and we let bees do the crossing.â

Using good rootstock can speed up the growth process for apples. In some cases, it cuts the waiting time for a tree to grow and start fruiting from 10 years or longer down to just two or three, although apple tree timelines can vary by years. Rootstocks are already much further along in development than the scions, and grafting a scion onto them allows scions to focus on growing (hopefully) tasty apples rather than worrying about growing big.Â

Out of the thousands of rootstocks Fazio works with, many are killed early on either because they just donât grow well or they donât stand up to the diseases with which theyâre inoculated. If a rootstock isnât at the top of its game, it wonât make the cut.Â

The same goes for apples.

âThe way we look at it is like it’s a conveyor belt of material,â Evans said. âEvery year new stuff gets added in at the beginning (new seedling material) but also every year stuff falls off the belt because it has a fatal flaw, there’s something wrong with itâ¦ What you’re left with at the end is maybe one or two elite selections and you had thousands at the beginning.â

There are countless reasons why an apple wonât make the cut. Brown listed off a few potential problems, including a calyx (the bottom part) thatâs too open and could allow disease in, or disorders in the lenticels (holes in the appleâs porous skin) that similarly open them up to diseases and can cause the skin to russet (turn brown and harden), something that’s increasingly becoming a problem with climate-change-induced stress.

Sometimes apples are culled because they taste too similarly to their parents. Sometimes they just taste bad.

âI had an entire progeny that tasted like soap,â Brown said, laughing.

Brown along with her colleagues, students, and whoever else is down for some apple roulette will bite into and taste thousands of apples as they walk through the orchard, taking notes along the way.

âYou might taste something that has a hint of cherry, or anise/fennel, or you might get green pepper, or diesel, and you can’t tell by looking at it,â Brown said. âEven with DNA markers you can’t always pick those out.â

The best ones are picked for their next test: Storage. Without a long, stable storage life that ideally can stretch from four to nine months, potential apples get the axe.Â

There are other pieces of the apple puzzle to consider too, like how apples and rootstocks grow consistently in different climates or are affected by outside factors. Insects and diseases like apple scab or fire blight can devastate crops, which can financially hurt growers and lead to food security issues. To fight these problems, some growers protect their crops by spraying pesticides. Others, like Fazio, hope to create apple breeds that allow growers to use less pesticides and fertilizers.

âApples are some of the most sprayed fruit in the world, just because we like nice clean apples,â Fazio said. âWe as a conglomeration of scientists working in apple breeding and many others, we’re not just trying to create new, better tasting, more productive apple trees, we’re also trying to make apple growing a lot more sustainable.”

The Orchards of Concklin’s Hill said some of the disease-resistant trees do well when separated from other varieties, but when close to other, more susceptible apples, nature finds a way.

âMy experience in the field is that fungus, insects, they will overcome whatever it is you’re out there doing,â he said.

Itâs almost a constant battle of breeders versus nature. And with the changing climate, breeders need to be conscious of a variety of incoming factors that could affect apple production.

âClimate change is going to be a huge challenge,â Brown said. âThat’s not something we can breed for immediately but we need to be cognizant of it: the changes, the new invasive species that we’re seeing, the droughts, precipitation patterns, the effect of these environments on quality attributes.â

Thereâs no one-size-fits-all solution here. As the world changes and tastes change, breeders will keep breeding to get the best apples they can.

The idea of breeding some kind of perfect supertree of apples is a pipe dream, Hill said.

âI don’t think that works in nature,” he said. “Even if something’s perfect, it doesn’t stay that way for long.â