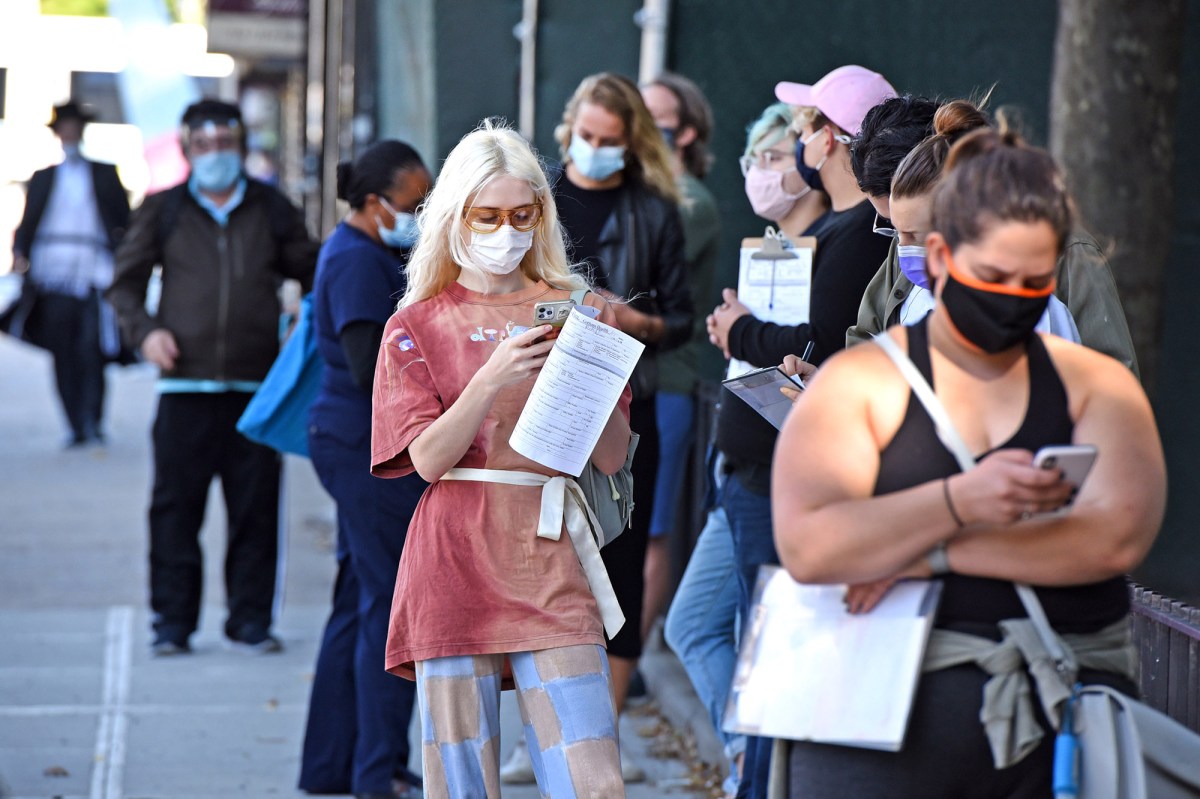 Teachers and students trying to do their part to keep the city healthy are running into long lines and lengthy waits for coronavirus test results.

A Queens middle school teacher waited more than three hours in the rain Tuesday to get a city test for the bug.

The teacher, who woke up Tuesday with a cough and scratchy throat, went to a city testing site at 333 Roebling St. in Brooklyn — and joined a line of at least 50 people that barely budged.

“I’m waiting outside in the rain, getting more sick. I should be home in bed,” said the teacher, who was unable to give the day’s lessons and missed a Zoom meeting to review a student’s special-ed plan.

A clinic employee who walked by the long line said the teacher could not cut to the front: “There is a priority for the DOE, but everyone’s a priority now,” the teacher quoted him as saying.

After finally getting tested, the teacher waited 40 minutes for the “rapid result” before leaving without it, exhausted. The result — negative — appeared online about two hours later.

“Rapid testing — that was one of the things promised to us,” the teacher said. “De Blasio didn’t come through.”

Department of Education spokeswoman Miranda Barbot said teachers should get priority at the 22 NYC Health + Hospitals COVID-19 test sites, but added, “due to demand and depending on the site, sometimes priority testing still results in wait time.”

​Of 36,956 DOE employees tested at the sites since early September, 180 were COVID-positive, or 0.49 percent, Barbot said Saturday.

Meanwhile, an excessive wait time upset the mom of a Manhattan middle school student randomly selected to take part in the city’s first day of in-school testing on Oct. 9.

The girl came home from the Clinton School near Union Square with a note from the Department of Education saying results would be relayed by phone or email and “the majority of test results will come back in about 48 hours.”

But the 48-hour mark came and went with no results and the wait stretched beyond 96 hours, the student’s mom told The Post.

The note instructed anyone who hadn’t received results in two to three days to email Fulgent Genetics, the company doing the testing.

But the mom said her emails bounced back twice, and her call to 311 was disconnected after 25 minutes of trying to get information.

The mom, who said she supports the testing program, finally got her daughter’s negative test results at 10 p.m. Tuesday.

“It would be nice if it worked,” she said. “It’s not helpful to wait that many days and not know.”

Meanwhile, the test results were seemingly available earlier in the day because Mayor Bill de Blasio announced them at his press briefing Tuesday morning.

“Testing took place in 56 schools, 1,751 adults and students tested, and we got only one positive test,” the mayor said.

The DOE said 99.7 percent of tests taken Oct. 9 came back within 48 hours, but five took longer.

“We’re off to a really strong start, and we’ll continue to work with our partners to get better, while emphasizing the importance of following health guidance and staying home if you feel sick,” Barbot said.