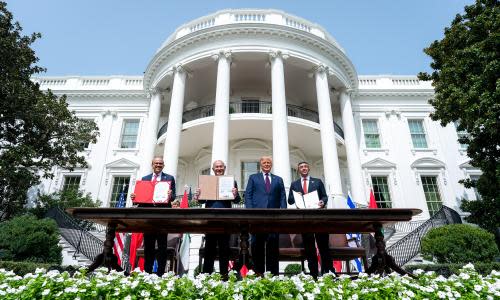 The White House was festooned with the flags of four nations. There were trumpet blasts, multiple signatures on various pieces of paper, and much weighty talk about blood and history – everything you might expect from a peace deal.

And not just any peace deal. The agreements signed in Washington on Tuesday were titled the Abraham Accords, implying a epochal reconciliation between Judaism, Islam and Christianity, three faiths with shared Middle East ancestry.

Benjamin Netanyahu had brought the rhetoric to match, with lines for the occasion seemingly borrowed from a biblical blockbuster.

“This day is a pivot of history. It heralds a new dawn of peace,” the Israeli prime minister declared.

Related: Trump’s battle with the American military is a fight he’s likely to lose

The host and master of ceremonies, Donald Trump, also delivered his quotes with a cinematic ring, albeit from a quite different movie.

Just whose blood might be involved was glossed over. The other signatories of the “accords”, the United Arab Emirates (UAE) and Bahrain, had never been at war with Israel. They are Gulf monarchies from the high-end enclaves of the Arab world, who have exchanged intelligence and technology with Israel as wall as a mutual fear of Iran, for several years already. The “peace agreements” involved three Middle Eastern governments putting an official seal on once furtive friendships, in a brash ceremony honed to benefit Trump’s reelection campaign.

Israel’s real enemies, Hamas, Hezbollah and Iran, had no less enmity as a result of the accords. By way of a reminder, as the documents were being signed, the sirens were going off along the Israeli coast, and six people were injured by rocket fire from the Gaza Strip.

The conflicting Israeli and Palestinian claims on territory and security, the impasse which had prevented diplomatic breakthroughs in the past two decades, was overcome in Tuesday’s White House deals simply by being ignored.

The UAE had claimed to have secured a pledge from Israel not to annex the West Bank, all least for the time being. There was no mention of that in its Abrahamic agreement, which focused on potential fields of economic cooperation.

Bahrain’s version was even thinner. The kingdom had agreed to join the spectacle a few days earlier, and its agreement to Israel amounted to a single page of vague aspirations, one of which was “continuing efforts for a just, comprehensive, enduring resolution of Israeli-Palesitnian conflict.”

“The loser here is definitely the Palestinian cause and the two state solution. It’s a surrender of the Palestinians,” Randa Slim, senior fellow at the Middle East Institute, said, adding that the accords stripped them of even the appearance of Arab solidarity.

“I don’t see how they can enter into negotiations and exact any serious concessions, now that they have been denied the one strong negotiating card they had at their disposal.”

The Abraham accords was at least a docudrama loosely based on some real-life issues. A taboo, however tenuous, had been broken. Israeli journalists and diplomats mingled freely with their Gulf Arab counterparts, and there will no doubt be an upside from economic cooperation.

The same can not be said for the other “peace deal” inked recently at the White House. That involved actual former adversaries, Serbian and Kosovan leaders, but next to no substance.

Serbia’s president, Aleksandar Vučić, and Kosovo’s prime minister, Avdullah Hoti, walked away on 4 September with separate documents, which restated agreements already made between the two sides, such as infrastructure projects that were already under way.

The new element was a tie-in with the Middle East. Both parties agreed to move their embassies to Jerusalem, which appeared to come as a surprise to Vučić. On hearing Trump announcing it at the elaborate Oval Office ceremony (also cast as a breakthrough between two ancient rivals), the Serbian leader thumbed through the documents in front of him and cast a bewildered look to an aide standing off camera. A few days later, his office let it be known that Serbia would not be keeping its end of the Jerusalem bargain if Israel recognised Kosovo, which had also been part of the deal.

Trump’s pre-election diplomatic offensive has not been all theatre, however. Talks started in Doha at the weekend between the Afghan government and the Taliban, a fraught discussion between real adversaries about very real issues, brokered by the US.

But the timing has been dictated by Trump’s campaign calendar. His insistence on withdrawing troops from Afghanistan, no matter what the consequences, gave the Taliban what it had been seeking all along and presented the government of president Ashraf Ghani little choice but to negotiate, with a weakened hand. The talks can still collapse, or Kabul could be forced to negotiate away basic freedoms, including women’s rights.

“In some respects, the Afghanistan talks are the most substantial of them all, in war and peace terms,” Daniel Serwer, senior fellow at the School of Advanced International Studies at Johns Hopkins University, said.

“But you have to be realistic about what it is. We’re losing that war and [the US negotiators] found a way to use withdrawal of troops as leverage on the government of Afghanistan. So if I were an ally of the United States, I might not be looking at that in a completely positive light.”

The consequences, for good or ill, will play themselves out after the election. Meanwhile, the Doha dialogue is being deployed by the White House as yet another example of how Trump slices through problems that were beyond his predecessors. The reelection campaign is making much of his nomination for the Nobel Prize, skating over the fact that all that took, under the idiosyncratic rules, was the support of a single maverick right-winger in the Norwegian parliament.

Even though the resulting campaign advertisement misspelled the award as the Noble, the fanfare seems bound to help Trump’s bid to stay in the Oval Office. It is foreign policy, reputed to be of little weight in a US election contest. But it is also show business, at which Trump excels.