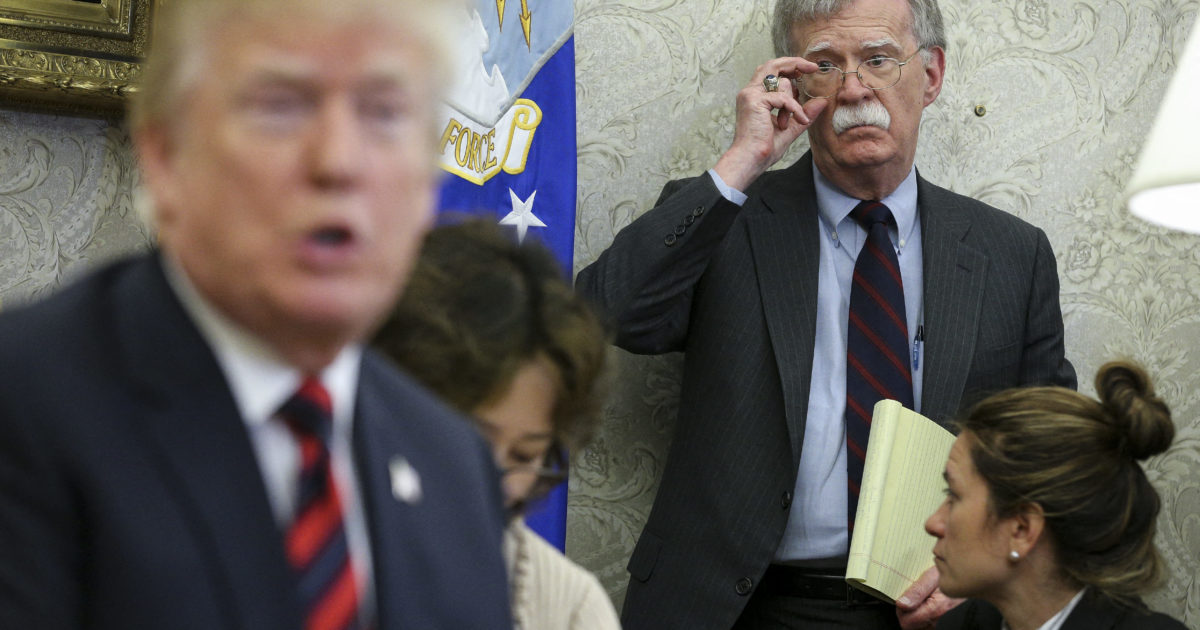 Having wrongly claimed that Iraq was in possession of weapons of mass destruction, former Pentagon official and national security advisor John Bolton knows a thing or two about big mistakes. Had he expressed any regret about advancing the lie that led America to invade Iraq, he might be considered a pretty good judge of when a White House is dangerously out of control—and that’s the case Bolton attempts to make in a tell-all book of his time as President Donald Trump’s national security advisor, In The Room Where It Happened.

Yet the incident Bolton singles out as “the most irrational thing I ever witnessed any President do,” according to The New York Times’ review of his book, has nothing to do with Trump asking foreign leaders for political help or cozying up to dictators. No, the worst thing Bolton witnessed Trump do is decide not to start a war with Iran.

“The moment he cites as the real ‘turning point’ for him in the administration had to do with an attack on Iran that, to Bolton’s abject disappointment, didn’t happen,” writes Jennifer Szalai in the Times’ review of the book. “In June 2019, Iran had shot down an unmanned American drone, and Bolton, who has always championed what he proudly calls ‘disproportionate response,’ pushed Trump to approve a series of military strikes in retaliation. You can sense Bolton’s excitement when he describes going home ‘at about 5:30’ for a change of clothes because he expected to be at the White House ‘all night.’ It’s therefore an awful shock when Trump decided to call off the strikes at the very last minute, after learning they would kill as many as 150 people.”

Bolton was plotting to start a war with Iran even before American troops hit the ground in Iraq. Trump may not deserve much praise for his foreign policy, but at least he resisted the urge to slaughter more innocent people in another Bolton-backed war.

Bolton’s book will be big news regardless of whether the White House succeeds in stopping its publication due to concerns about classified information—read Reason’s Scott Shackford’s in-depth take on all of that here. Among the dribs and drabs that have leaked so far, the biggest bombshell seems to be the allegation that Trump’s impeachable conduct with Ukraine was not a one-time mistake but part of a pattern. In addition to pressuring the Ukrainian government to investigate Democratic presidential candidate Joe Biden, Trump also directed U.S. policy towards Turkey and China with an eye toward winning reelection.

“Trump commingled the personal and the national not just on trade questions but across the whole field of national security,” Bolton writes in an excerpt of the book published by The Wall Street Journal. Much of Trump’s trade war with China, Bolton alleges, was conducted with the intent of helping the president win reelection and little more. “I am hard-pressed to identify any significant Trump decision during my White House tenure that wasn’t driven by re-election calculations,” Bolton writes.

In another anecdote, this one reported by The New York Times, Bolton relates that Trump had no idea the United Kingdom was a nuclear power and that he did not know Finland was not a part of Russia. Elsewhere in the Journal excerpt, Bolton accuses Trump of giving Chinese President Xi Jinping his blessing to build concentration camps in Xinjiang, a province where the Chinese government has brutally repressed the Uighurs, a Muslim minority population.

His WMD fibs aside, there’s no reason to doubt that Bolton is telling the truth about all this. After all the ridiculous and insane things Trump has said and done in public—in front of TV cameras, even—it is nearly impossible to be surprised by anything that he’s reportedly said or done in private. Remember when the president stood on the driveway in front of the White House and told reporters that China should open a “major investigation into the Bidens” while he was actively being impeached by Congress for allegedly asking Ukraine to open an investigation into the Bidens? Exactly.

Bolton’s book might add some specific details that no one previously knew, but it is unlikely to tell us much about Trump that isn’t already apparent after watching his first three years in office—or scrolling through his Twitter feed. The man is an open book.

But no one should believe for a second that Bolton wrote this book out of a sincere desire to speak truth to power. If Bolton believed Trump was an imminent danger to the country, he could have told Congress what he knew, without waiting for a subpoena, during the impeachment proceedings. Doing so may not have changed many minds, but it might have changed enough of them to remove from office a man Bolton seems to believe is dangerously incompetent.

U.S. Trade Representative Robert Lighthizer says the idea that Trump sought to leverage trade policy to get Xi to help with Trump’s reelection “absolutely untrue,” and the Trump campaign issued a statement saying the claim was “absurd.” Trump is, of course, using the same lines he uses about everyone who leaves the White House and then speaks frankly about the incompetence they witnessed there. It really makes you wonder who is hiring these people.

President Trump responds to @AmbJohnBolton‘s book: “He broke the law. He was a washed up guy, I gave him a chance… I wasn’t very enamored… He was one of the big guns for let’s get into Iraq…. He broke the law… It’s highly classified information.”

Any libertarian—and, for that matter, anyone who possesses an ounce of concern for the wellbeing of other humans—should prefer to see Bolton criticizing the White House from afar instead of advising the president about what countries to bomb next.

But let’s not turn Bolton into some sort of straight-shooting hero. No matter what else Bolton might have to say in his new book, his legacy will always be advocating for horrifying, bloody, and counterproductive foreign policies.

Trump’s foreign policy might be an inchoate mess operating with the sole purpose of getting the president reelected, but that’s at least less evil than Bolton’s gleeful warmongering.

Have we reached a tipping point in Americans’ overall view of the police? A new POLITICO/Morning Consult poll finds that a combined 59 percent of Americans say police departments across the country need either a complete overhaul (22 percent) or major reforms (37 percent), even as the majority of Americans (57 percent) say they disagree with the “Defund The Police” slogan popularized during recent protests against police brutality.

A Washington Post poll released this week found that 69 percent of Americans say Floyd’s killing represents a systemic problem with policing, while just 29 percent say it’s an isolated incident; six years ago, the Post reports, more than half of Americans saw police killings of unarmed black men as isolated events, with just 43 percent viewing them as part of a wider trend.

What’s behind this shift? There are many factors, but the biggest one is probably the fact that almost every American carries a high-definition video camera at all times. Police misconduct can no longer be explained away or hidden. It must be addressed.

Aunt Jemima and Uncle Ben could be going the way of Sambo’s—and that’s just fine.

The Quaker Oats Company, which is owned by PepsiCo, announced that it will remove the image of Aunt Jemima from its packaging and change the name of the brand later this year. “We recognize Aunt Jemima’s origins are based on a racial stereotype,” Kristin Kroepfl, chief marketing officer of Quaker Foods North America, said in a statement Wednesday. “While work has been done over the years to update the brand in a manner intended to be appropriate and respectful, we realize those changes are not enough.”

Mars Food, which owns the Uncle Ben’s brand of rice, also announced that it would “evolve” the brand, though the brand did not offer specifics. While the terms “Aunt” and “Uncle” have unsavory historical connotations—during the Jim Crow era, southern whites would use those terms to refer to older black women and men as a way to avoid addressing them as “Mrs.” or “Mr.”—the specific character of “Uncle Ben” is reportedly based on a Chicago restauranteur rather than a southern farmer.

But before anyone gets upset about Uncle Ben and Aunt Jemima getting canceled—oops, too late—let’s be clear about one thing: PepsiCo, the Quaker Oats Company, and Mars Food can put whatever labels they want on their packaging, and you don’t have a right to buy a box of five-minute rice or poor quality maple syrup with a black person’s image on the front.

• Does President Donald Trump even want a second term?

• A government audit accuses the Drug Enforcement Agency of having laundered tens of millions of dollars for drug traffickers over the past decade.

• The federal government has too much hydroxychloroquine.

• The Tennessee legislature has passed a bill reforming “drug-free school zone” laws that are little more than an excuse to impose harsher sentences.

• If Major League Baseball returns this year, National League teams are reportedly going to use a designated hitter—which means the end of amazing stuff like this:

Since it looks like the NL DH is finally here, I’m going to start a thread of monster home runs by pitchers.

On This Date: In 2016, Bartolo Colon became the oldest player to hit his first home run, and it was GLORIOUS. pic.twitter.com/OHS4lVsANF