Many restaurants and bars around the country reopened this past weekend, and they turned out to be very busy.

WASHINGTON – The Justice Department warned state and local officials Friday of the possible illegality of their stay-at-home orders, as the agency continues to monitor  restrictions meant to contain the spread of COVID-19.

Attorney General William Barr said last month that the Justice Department would intervene if stay-at-home orders in response to the coronavirus pandemic become too restrictive, directing federal prosecutors “to be on the lookout” for state and local directives that could be violating constitutional rights. In a memo, Barr acknowledged that while lockdowns are “necessary” to stop the spread of the virus, such restrictions have placed “tremendous burdens” on Americans.

“If a state or local ordinance crosses the line from an appropriate exercise of authority to stop the spread of COVID-19 into an overbearing infringement of constitutional and statutory protections, the Department of Justice may have an obligation to address that overreach in federal court,” Barr said.

The Justice Department’s comments Friday regarding Los Angeles and Illinois stop short of declaring legal actions against the localities. But the agency warns of potential civil liberties violations.

Governor Andrew Cuomo announced on Saturday that half of New York’s regions have began reopening as lockdown restrictions imposed to curb the spread of the coronavirus are eased. (May 16)

“The Department of Justice does not seek to dictate how cities and counties such as Los Angeles determine what degree of activity and personal interaction should be allowed to protect the safety of their citizens,” Dreiband said in the letter to Los Angeles officials. “However, we are charged with protecting the federal statutory and constitutional rights of all persons in our country, and ensuring that governmental restrictions are not unconstitutionally burdensome. … Simply put, there is no pandemic exception to the U.S. Constitution and its Bill of Rights.”

The letter was addressed to Los Angeles Mayor Eric Garcetti and Department of Public Health Director Barbara Ferrer and cited comments the two made about the possibility of long-term lockdowns. Ferrer said at a county supervisors’ meeting earlier this month that some form of stay-at-home orders will likely stay in place “for the next three months.” Garcetti also said in a media interview that Los Angeles would “never be completely open until we have a cure” for the virus.

A county official later said that Ferrer’s comments were “taken out of context,” according to CBS Los Angeles. Garcetti also later clarified his comments and said he doesn’t expect an extended lockdown. 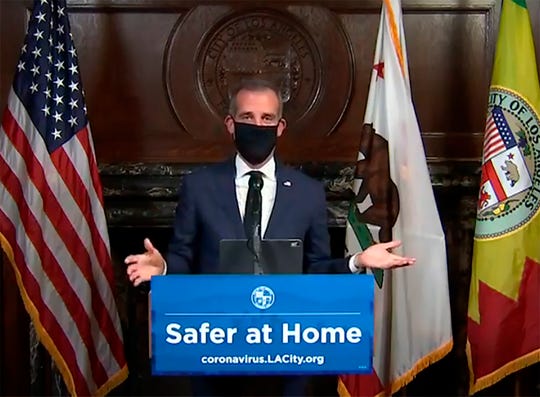 “However, we remain concerned about what may be an arbitrary and heavy-handed approach to continuing stay-at-home requirements,” Dreiband said in the letter. Garcetti’s office did not immediately respond to a request for comment.

Also on Friday, the Justice Department filed court papers in an unrelated lawsuit against Pritzker, Illinois’ Democratic governor. The department argued Pritzker exceeded his authority when he ordered citizens to stay at home except for essential reasons.

Pritzker, who extended stay-at-home orders until end of May, had been sued by Republican Illinois state Rep. Darren Bailey. Bailey alleged the restrictions are unlawful because they extended beyond the 30-day emergency powers the state legislature granted Pritzker.

‘Naming and shaming’: States stepping up enforcement of stay-at-home orders

In its court filing supporting Bailey, the Justice Department said the lawmaker raised substantial questions on the lawfulness of Pritzker’s stay-at-home order.

“Even during times of crisis, executive actions undertaken in the name of public safety must be lawful,” said Steven Weinhoeft, U.S. Attorney for the Southern District of Illinois. “And while the people of Illinois must be physically protected from the effects of this public health crisis … their constitutionally guaranteed rights and liberties must be safeguarded as well.” 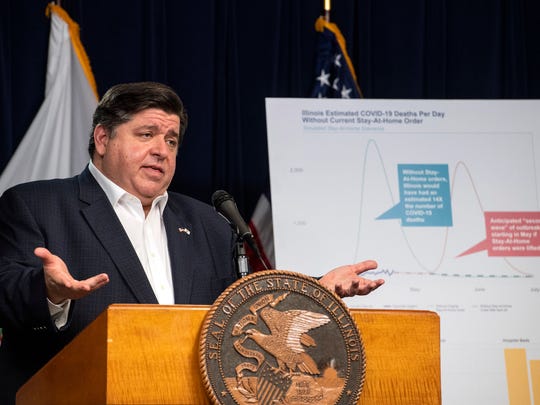 In this April 23, 2020 file photo, Gov. J.B. Pritzker announces an extension of the stay at home order for Illinois as well as a mandatory face covering order at his daily Illinois coronavirus update at the Thompson Center. (Photo: The Associated Press)