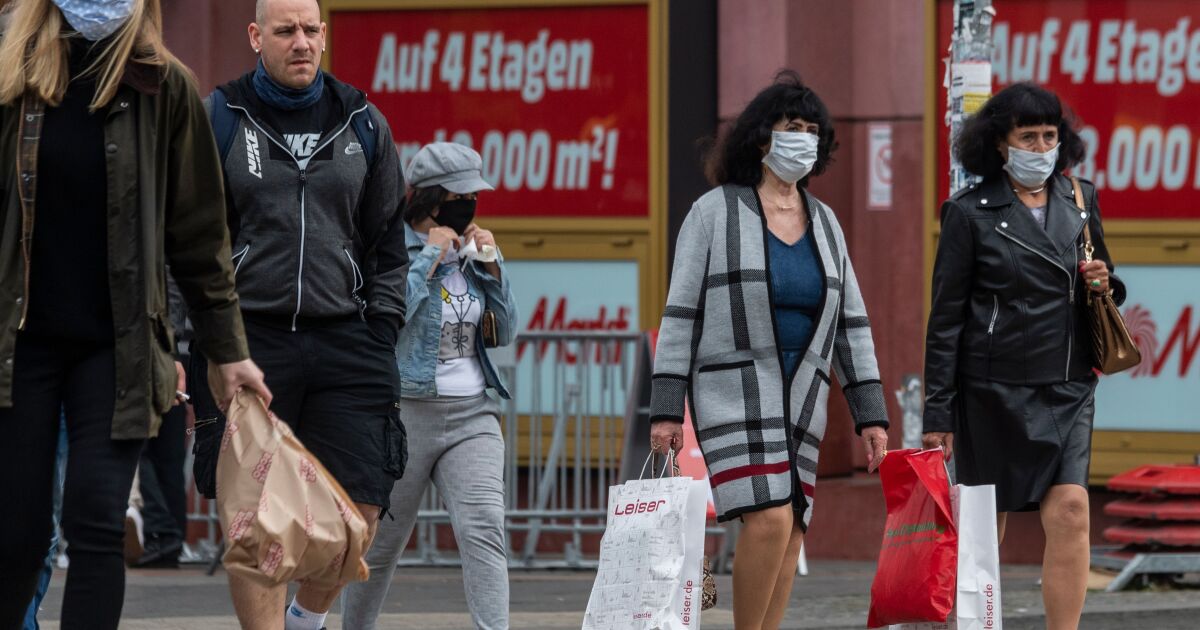 Strolling through Berlin’s sprawling Tiergarten, window-shopping along stylish Kurfurstendamm boulevard, getting stuck in traffic again: after a winter of vigilance, Germans are venturing out, masked and properly socially distanced, to enjoy the first warm days of spring.

These scenes of normality — albeit laden with precautions — are gradually returning, as Germany appears to have avoided the worst of a pandemic that has devastated its neighbors and reminded those old enough of a world war that shook the continent.

Europe’s richest and most populous country — with a trained scientist at the helm, a generally rule-following public and an enviable healthcare system — is becoming a case study in how to deal with a public-health crisis.

Its approach to the coronavirus outbreak that has killed at least 224,000 people worldwide is not as daring as Sweden’s “herd immunity” strategy, but it is far more systematic than the disarray unfolding in the United States.

Germany — which over the last century has been looked upon by the rest of Europe with both envy and fear — has by no means escaped the contagion. There have been more than 160,000 confirmed cases, the world’s fifth-highest known tally, and officials warned of a short-lived uptick in transmission as people resumed some regular activities after weeks of lockdown.

More than 6,300 people in Germany had died of COVID-19, the disease caused by the virus, as of Wednesday. But the death rate hovers at about 4%, lower by orders of magnitude than that in Spain or Italy, France or Britain — or the U.S.

No single element accounts for Germany’s success in managing its outbreak. Analysts point to a variety of social, cultural and political factors — plus a measure of luck and chance.

Other factors are less tangible but equally crucial: a high level of public confidence in the state and its leaders, cooperation across the political spectrum, and a system of government, crafted after World War II, in which federal, state and local officials share carefully calibrated authority.

Chancellor Angela Merkel, a symbol of stability throughout her nearly 15 years in power, embarked on this crisis as her political career was winding down. The 65-year-old leader, on track to retire late next year, has had her share of missteps over the years, but there is a broad sense that this is the kind of moment in which her strengths can shine.

This month, Merkel, who has a doctorate in quantum chemistry, was captured on video giving a crisp, precise 98-second explanation of coronavirus transmission rates — a clip that, fittingly for the times, went viral. Even as a child, Merkel was meticulous and measured: she once deliberated for 45 minutes before jumping off a diving board.

“Merkel has emerged as an excellent crisis leader,” said Joern Leonhard, a history professor and author at the University of Freiburg. “She truly does think and analyze things as you would expect from a natural scientist — she listens, weighs the evidence, and then moves forward, in very small, incremental and rational steps.”

That abundance of caution sometimes garners criticism, but is perceived now as reassuring and steadying, he said.

“People know: it’s never a show with her,” Leonhard said. “And that’s all been extremely helpful during this crisis.”

In recent weeks, Merkel’s popularity has reached record highs, according to opinion polls. A DeutschlandTrend survey for ARD television in early April said nearly two-thirds of Germans pronounced themselves either satisfied or extremely so with her performance. More than 90% supported the tight lockdown measures she ordered.

“It’s a strange time,” said Oliver Bischof, a physiotherapist in Berlin, noting the conflicting pressures of public health and economic well-being. “But it seems like Merkel and the government are doing all the right things. It’s a difficult balancing act.”

Germany’s pandemic response, like nearly all momentous modern-day events, bears the weight of history. The tradition of rule-following found its darkest expression in the days of the Third Reich, when many ordinary Germans turned a blind eye to Nazi atrocities.

Now, however, analysts say a far more benign version of that impulse helps the country’s leaders retain public support, even when citizens are temporarily deprived of their basic liberties through lockdowns and other restrictions.

“The tendency to do what the government tells them during times of crisis is part of the German DNA,” Leonhard said.

Germany’s political system is a legacy of postwar reforms, a form of federalism created as one of myriad checks on any resurgence of inflammatory Nazi-style populism. That arrangement is now proving an asset in confronting the coronavirus.

Germany has 16 states, and despite a briefly choppy start in mid-March, they and the government have largely moved in concert in matters like school closings, social-distancing rules, lockdowns — and now gradual and tentative reopening of parts of the economy.

Even though the virus has hit some states harder than others, all 16 have essentially agreed to the same general rules, with only minor regional variations. The states and federal government are also cooperating closely in obtaining and allocating supplies like ventilators and personal protection equipment for healthcare workers.

“The whole political system in Germany is built upon compromise,” said Stefan Kornelius, a senior editor at the Sueddeutsche Zeitung newspaper in Munich. Germans, he said, “learned their lesson after being exposed to a totalitarian system.”

A public-health crisis, almost by definition, is also an economic one — but again, Germany has softened the blow, thanks in part to elements that might seem burdensome in normal times, such as an exacting bureaucracy and a high tax rate.

The government has funneled billions of euros into a payment system known as Kurzarbeitergeld, which provides up to two-thirds of workers’ wages so companies can avoid layoffs. As a result, an unemployment rate of 3.2% is forecast to increase, but has not yet risen substantially — unlike in the United States, where the jobless rate swiftly soared to Depression-level heights and is still climbing.

Symbolic measures build public confidence, too. While the U.S. and British governments struggled to repatriate nationals stranded abroad by the pandemic, the German government swiftly spent about $55 million and chartered hundreds of aircraft to fly home more than 240,000 German tourists traveling in dozens of foreign countries when the outbreak hit. It is in the process of sweeping up several hundred more who were caught out in particularly remote locales.

As a gradual reopening begins, the challenge is far from over. Germany has largely succeeded in “flattening the curve,” with new infections falling off sharply from a peak in late March. Virus-transmission rates briefly crept up before subsiding again, according to new data released Wednesday.

The reclaiming of daily life, then, is a tentative process. Restaurants, cafes and large stores are still closed by government order, but the streets of Berlin are springing back to life. Squares are no longer eerily empty. Even snarled traffic, that perpetual urban aggravation, is somehow a welcome sight now.

Amid the continuing crisis, many ordinary Germans are heartened by a sense of national solidarity.

“It’s been a really positive surprise for me to see how pretty much everyone is pulling together and working constructively to get through this,” said Manuela Milbradt, who is staying home from her job on an airline groundcrew at Berlin’s Tegel airport, but with her income and position protected.

Milbradt said she was never much of a Merkel fan — but acknowledged that the government seemed to be doing its job.

“The average German doesn’t have to worry about anything,” she said. “The state has stepped in to support companies and workers and small businesses, and it’s stepped in to make sure the healthcare system is working the way it should.”

“You just can’t compare the situation to America,” she said. “In Germany, no one feels like they’re being left alone to deal with this crisis.”