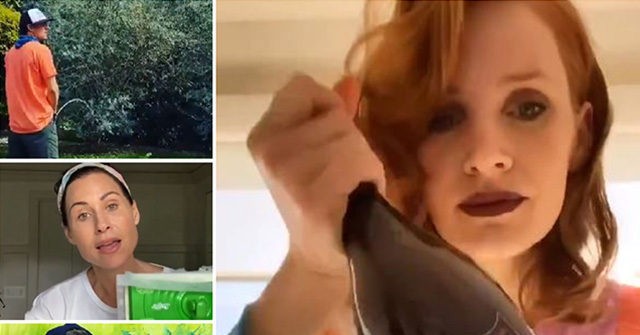 Hollywood celebrities clearly haven’t gotten the memo that their coronavirus-themed social media videos are falling flat with the public. Despite widespread derision, the stars keep pumping out stay-at-home dispatches that, in some cases, reveal a startling disconnection from reality.

While working class families around the world face economic uncertainty, actress Chastain celebrated her birthday with a bottle of Dom Pérignon rosé champagne, which typically sells for more than $200.

Thank you for all of the Birthday wishes & virtually celebrating with me yesterday! pic.twitter.com/AOaWCrYWz4

In what was likely meant to be a humorous video, actress Minnie Driver, a self-declared “virgin housekeeper,” explained how she fell in love with the Swiffer as a result of being stuck at home.

My friend started a quarantine recommendations account on insta. This is my contribution. Sanity saver , rather than an ad. #StayHome #StayHealthy #Swiff pic.twitter.com/AXkPo2bvVf

Actress Eva Longoria used the worldwide pandemic to promote the sitcom One Day At a Time, which now airs on Pop TV after being canceled by Netflix.

Hey Ya’ll make sure to catch @OneDayAtATimePop on @poptv while you’re in self isolation! #ODAAT pic.twitter.com/BW4odZWo8T

Actress Rita Wilson, apparently still in COVID-19 isolation, invited her fans to text her on a private cell phone with music requests that she will perform.

Anthony Hopkins revealed that he is spending his time in self-imposed quarantine painting, playing music, and bonding with his cat.

Amanda Seyfried posted a bizarrely profane video in which she urged her fans to “stay the fuck” home.