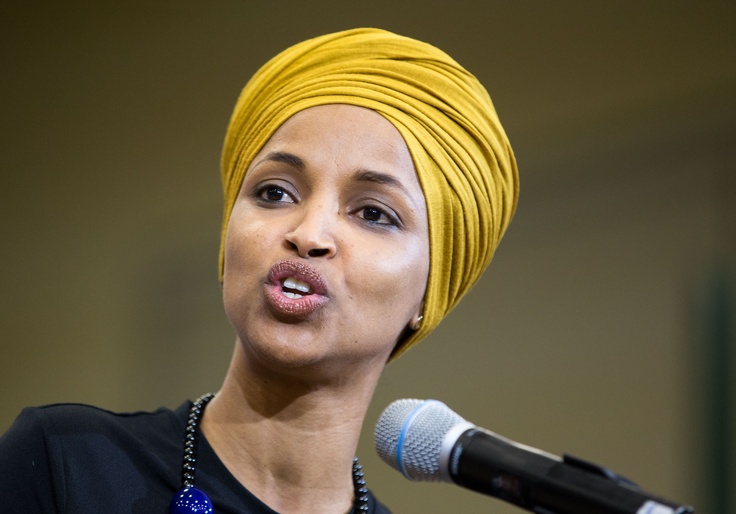 As Rep. Ilhan Omar (D., Minn.) introduced what she is calling a “progressive vision” for foreign policy, her foreign policy adviser demurred on a cornerstone of that vision: the Boycott, Divestment, and Sanctions (BDS) campaign to economically isolate Israel.

At a briefing on Wednesday about the plan, which Omar is dubbing a “Pathway to Peace,” Omar aide Ryan Morgan declined to explain why the congresswoman opposes economic sanctions but supports BDS.

Omar left the event after offering brief remarks, leaving Morgan to participate in the panel discussion that followed in her stead.

“You’re asking me if I want to take the BDS question?” said Morgan. “No.”

Omar announced a package of bills that she says reflects “a bold progressive vision” for U.S. foreign policy. The discussion that followed was moderated by Trita Parsi, executive vice president of the Quincy Institute for Responsible Statecraft, a new think tank backed by the billionaires Charles Koch and George Soros.

Both Omar and the Quincy Institute have faced accusations of anti-Semitism.

Omar has been dogged by repeated allegations of anti-Semitism since she assumed office in 2019. The Minnesota congresswoman faced bipartisan condemnation in February 2019 when she tweeted that lawmakers who support Israel do so because of financial contributions from pro-Israel donors. “It’s all about the Benjamins baby,” she wrote at the time, a remark she later apologized for, arguing that she was unaware of the history of anti-Semitism associated with the remark. She thanked Jewish colleagues for educating her on the “painful history of anti-Semitism.”

Despite her support for economic sanctions against the Jewish state, Omar has frequently criticized the imposition of sanctions on American adversaries. She denounced President Donald Trump’s decision to impose additional sanctions on Iran, stating that she opposes any sanctions that “economically devastate a country and ultimately only harm its citizens.”

Neither Morgan nor a spokesman for Omar responded to requests for comment.

Launched in December, the Quincy Institute has since hired several fellows and area experts with a history of anti-Semitic and anti-Israel comments. Lawrence Wilkerson, a nonresident fellow at the institute, argued in 2007 that the “Jewish lobby in America” pushed America into the Iraq war and singled out the influence of Jewish advisers in the George W. Bush administration. The institute’s first policy brief was drafted by the retired diplomat Chas Freeman, who has accused the “Israel lobby” of derailing his nomination to lead President Barack Obama’s National Intelligence Council. He later insinuated in a speech in Moscow that many American Jews, including rabbis, constitute a “fifth column” in the United States who reflexively support Israel and smear its critics.

Parsi, the panel moderator and senior staffer at the think tank, cofounded the National Iranian American Council, an advocacy group that has been accused of lobbying on behalf of the Iranian regime. The group fervently supported the now-defunct Iran nuclear deal, with staffers accusing Jews in opposition to the agreement with charges of dual-loyalty. At the time, the organization’s research director, Reza Marashi, accused Sen. Chuck Schumer (D., N.Y.), who is Jewish, of “putting Israel’s interests ahead of America’s interests.”

The Quincy Institute’s prominent critics include Sen. Tom Cotton (R., Ark.), who said on the Senate floor in January that the “ancient hatred of anti-Semitism … festers in Washington think tanks like the Quincy Institute, an isolationist, blame America First money pit for so-called scholars who’ve written that American foreign policy could be fixed if only it were rid of the malign influence of Jewish money.”

A spokesman for the Quincy Institute did not respond to a request for comment.

Yuichiro Kakutani is a reporter at the Washington Free Beacon. He recently graduated from Cornell University, where he studied government and history. He previously served as editor for The Cornell Daily Sun. He’s a proud New Yorker — and by that he means, New York City. He can be reached at kakutani@freebeacon.com.