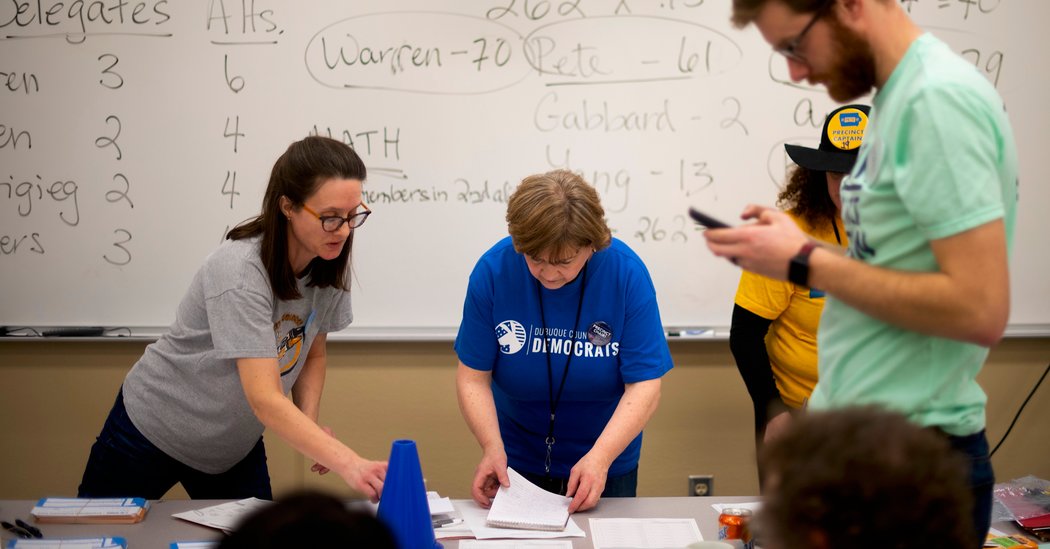 Behind the breakdown in Iowa

The Democratic nominating process had a rocky start, after party officials announced early this morning that results from the state’s caucuses wouldn’t be released until later today. Here are the latest updates.

They attributed the delay to inconsistencies in the reporting of results and stressed that it wasn’t because of hacking. We’ve pieced together the events that led up to what one former state Democratic official called “a systemwide disaster.”

The details: When the results are released, find them here.

What’s next: Two of our reporters in Des Moines noted, “With no hard numbers to reckon with, no cold math to disprove the dream, no fewer than five candidates marched onstage to deliver something resembling a victory speech.”

Background: After a razor-close finish in Iowa between Hillary Clinton and Bernie Sanders in 2016, new standards this year required officials to submit three numbers — rather than one — from each of the state’s 1,600-plus precincts. That change, and a new app, slowed the reporting of results.

Closer look: People who were briefed on the app by the Iowa Democratic Party told The Times that it hadn’t been tested properly. A spokeswoman for the state party denied that the app’s failure had played a role in the delays.

The Daily: Today’s episode is about the confusion.

Catch up: Here’s a primer on how Iowa’s first-in-the-nation nominating contest works.

On trial today, on the dais tonight

President Trump will deliver his third State of the Union address this evening, in the House where he was impeached just seven weeks ago and a day before a vote is scheduled in the Senate that is likely to acquit him of high crimes and misdemeanors.

It’s unclear whether the president will address his impeachment trial. White House officials said the speech would highlight Mr. Trump’s record on the economy, increased military spending and the appointment of conservative judges.

The Times will offer real-time analysis and stream the address live when it begins around 9 p.m. Eastern. Here’s what to expect.

Related: Mr. Trump’s guests at the speech will include a Border Patrol agent and an Army veteran who struggled with post-traumatic stress disorder, addiction and homelessness. Members of Congress are also allowed to bring a guest. We profiled some of them.

Quotable: Newt Gingrich, the former House speaker, is the former boss of Mr. Trump’s two speechwriters for tonight. “They really have a deep feeling that the more anonymous they are, they’re probably better off,” he said.

A 39-year-old man died today from the virus in Hong Kong. He had traveled to Wuhan, the epicenter of the outbreak, last month.

It was the second death from the virus outside mainland China; a man died in the Philippines over the weekend. Here are the latest updates.

Related: Macau, the gambling hub that’s a semiautonomous region of China, announced today that it would shut its casinos for two weeks in an effort to limit the epidemic.

The details: The virus has sickened more than 20,000 in Asia, and at least 427 have died. Our maps track its spread.

Catch up: As other countries ramped up efforts on Monday to isolate China, the Chinese government called the epidemic a “major test.” The U.S. has imposed its first federally required quarantine since the smallpox era, half a century ago. Airline passengers from China are now subject to two weeks in isolation.

Go deeper: China is turning to familiar authoritarian techniques to contain the outbreak, including asking neighbors to inform on one another.

Gap widens between haves and have-nots in tech

Alphabet, Amazon, Apple, Facebook and Microsoft made a combined $55.2 billion in net profit in the most recent quarter, making clear that threats of regulatory and legal scrutiny have done little to hurt the bottom line.

As the companies get richer, they’re branching out, buying or muscling aside rivals in ways that could have far-reaching implications for the world economy.

Yesterday: Alphabet, Google’s parent company, reported revenue last year exceeding $161 billion, while its profit in the last quarter of 2019 was 19 percent more than a year earlier.

Related: The head of the antitrust division at the Department of Justice has recused himself from investigating Google because of a potential conflict of interest related to past work for the company, two people with knowledge of the decision told The Times.

If you have 5 minutes, this is worth it

Beauty and color in Iraq were largely suppressed for decades by poverty and government oppression.

No longer: A 15-story shell of a structure in Baghdad is full of paintings, sculptures, photographs and shrines that criticize the country’s leadership and pay homage to protesters who have died in recent rallies.

Our correspondent Alissa Rubin sees the unusual gallery as a window into a broader flowering. “It is as if an entire society is awakening to the sound of its own voice, and to the shape, size and sway of its creative force,” she writes.

Here’s what else is happening

Coal in Japan: Plans for up to 22 new coal-burning power plants — one of the dirtiest sources of electricity — come after the Fukushima disaster almost a decade ago forced the country to all but abandon its nuclear power program.

Snapshot: Above, Anguilla, a British territory in the Caribbean that has benefited from two trends in technology: artificial intelligence and vanity internet addresses. Every time an address ending in “.ai” is registered or renewed, Anguilla collects $50.

What we’re listening to: This episode of Literary Friction, a monthly podcast about books, by Carrie Plitt, a literary agent, and Octavia Bright, a writer and academic. “I’m just catching up with its 2019-in-review episode,” says Chris, your briefing writer. “And based on their recommendations, I’ve already added to my nightstand’s ever-growing pile.”

Now, a break from the news

Go: “Beyond Babel,” a West Coast urban dance riff on “Romeo and Juliet,” sets numbers to borrowed pop songs. It’s at the Gym at Judson Church in Manhattan.

Smarter Living: These seven podcasts can help you nurture a healthier mind and body.

And now for the Back Story on …

Sydney Ember, a reporter on our politics team, moved to Iowa to get to know the state ahead of the caucuses. She wrote about it for our Reader Center. This is a condensed version.

It was November and I had been in Iowa for less than a month, and set out to profile someone who could bring Iowa to life for our readers. Rob Sand, the state auditor, pitched himself as a subject — and then took me bowhunting.

That turned out to involve climbing a tree and quietly waiting for a deer. As my fingers and toes lost feeling in the cold, I thought, not for the last time: What am I doing here?

My goal was to understand the people of Iowa and the issues they care about, in addition to the candidates campaigning in the state and their volunteers, staff members and strategists.

I learned that many Democrats here want above all to beat President Trump — a desire that made it extraordinarily difficult for them to choose a candidate. Some Republicans and independents wanted that, too.

I learned that cars with all-wheel drive can still fishtail in the snow and that pizza from Casey’s General Store is delicious. (But no, I did not try the breakfast pizza, a particularly polarizing Iowa delicacy.)

It might be more practical, and less expensive, for The Times and other news organizations not to move reporters to Iowa before the caucuses. But there is no substitute for spending a lot of time here, experiencing the all-consuming nature of the run-up to the state’s caucuses firsthand.

That’s it for this briefing. See you next time.

Thank you
Mark Josephson and Eleanor Stanford provided the break from the news. You can reach the team at briefing@nytimes.com.

P.S.
• We’re listening to “The Daily.” Today’s episode is about the Iowa caucuses.
• Here’s today’s Mini Crossword, and a clue: Ethnic group making up more than 90% of China (three letters). You can find all our puzzles here.
• Hanna Ingber, who started The Times’s Reader Center in 2017, will be the editor of our new technology newsletter.