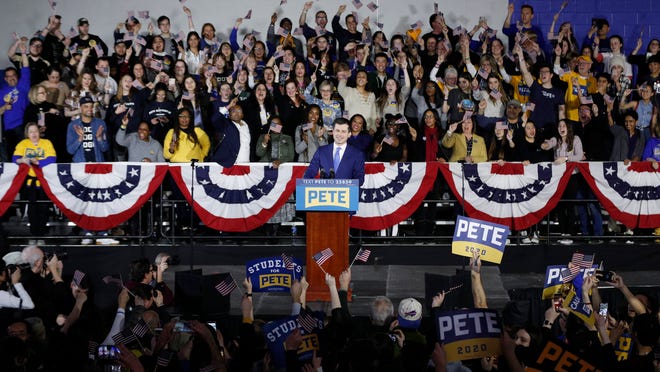 DES MOINES – More than 2,500 campaign stops. A field that at times topped 20 candidates. And more than 1,600 Iowa Democratic caucus precincts, primed to kick off the 2020 primary season.

And it only took roughly 3 hours for it to start crumbling.

The results of the Iowa Democratic caucuses were delayed Monday night, with the state party citing reporting issues and a verification process that involved three times the results as previous caucuses. It wasn’t the first time the Iowa caucuses have produced late results, but Monday night’s issues come after months of heightened criticism of the caucus process and calls for Iowa to lose its vaunted first-in-the-nation status.

Here’s what we know and what could happen next:

Why were the results delayed?

The Iowa Democratic Party released a statement shortly before 10:30 p.m. Monday night saying there were “inconsistencies” in the results being reported from precincts and the party was to conducting unspecified “quality checks.”

Mandy McClure, communications director for the state party, said in a statement that the delay also was the result of the party reporting three sets of data for the first time. The party changed the caucus rules this year, and was going to release three sets of data: raw votes from the first alignment, final alignment, and the usual state delegate equivalents.

“We found inconsistencies in the reporting of three sets of results,” McClure said in the statement. “In addition to the tech systems being used to tabulate results, we are also using photos of results and a paper trail to validate that all results match and ensure that we have confidence and accuracy in the numbers we report.”

At the time of her statement, McClure said the party had data so far from “around 25%” of the state’s 1,765 precincts, adding that “early data indicates turnout is on pace for 2016.”

Bagniewski said boxes from nearly all of the county’s 177 precincts were delivered back to the county’s offices with written preference cards that spell out how individual caucusgoers aligned in the first and final alignments. He said the results are nearly all in — they just can’t report them to the state party.

The Iowa Democratic Party, however, insisted that the delays were not to do an issue with the app.

“This is simply a reporting issue, the app did not go down and this is not a hack or an intrusion,” McClure said in another statement later Monday. “The underlying data and paper trail is sound and will simply take time to further report the results.”

How did the candidates respond?

Although there were no reported results, several of the Democratic candidates gave speeches spinning the non-existent results in the best light for themselves.

“I have a strong feeling that at some point the results will be announced,” Sen. Bernie Sanders joked with supporters in Des Moines. “And when those results are announced, I have a good feeling we’re going to be doing very, very well here in Iowa.”

Former South Bend, Indiana, Mayor Pete Buttigeig quite possibly gave the most direct claim to victory, despite there being no results.

“We don’t know all the results. But we know by the time it’s all said and done, Iowa, you have shocked the nation,” Buttigieg said. “Because, by all indications, we are going on to New Hampshire victorious.”

Former Vice President Joe Biden’s also addressed supporters in Des Moines, saying, “It looks like it is going to be a long night but I’m feeling good.”

“We appreciate that you plan to brief the campaigns momentarily on these issues, and we plan to participate,” Dana Remus, general counsel for the former vice president’s campaign, wrote in a letter to the party Monday as delays extended into early Tuesday morning. “However, we believe that the campaigns deserve full explanations and relevant information regarding the methods of quality control you are employing, and an opportunity to respond before any official results are released,” the letter said.

In a phone call that lasted just more than a minute, the Iowa Democratic Party early Tuesday morning said they expect results to be released at some point later in the day, and the organization is manually recounting the results.

“The integrity of our process with the results have and always will be our top priority,” Iowa Democratic Party Chair Troy Price told reporters on a conference call at 1 a.m. CST. “At this point the IDP is manually verifying all precinct results. We expect to have numbers to report later today. “

“They’re validating every piece of data we have against our paper trail,” he continued. “The system is taking longer than expected but it’s in place to ensure we are eventually able to report results with full confidence.”

Price said the state party is in contact with the campaigns and will keep them updated.

But Democratic candidates didn’t stick around Iowa for the results. Many candidates have already left to the next primary contest in New Hampshire.

‘On to New Hampshire’:Democratic candidates not waiting for Iowa outcome to give their speeches

What did Trump say?

“Democrats are stewing in a caucus mess of their own creation with the sloppiest train wreck in history,” Trump campaign manager Brad Parscale said in an emailed statement, adding that there were concerns about “the fairness of the process.”

“And these are the people who want to run our entire health care system?” he asked.

Parscale also touted Trump’s early and easy victory in the Republican caucuses, which was announced about 30 minutes after the caucuses began.