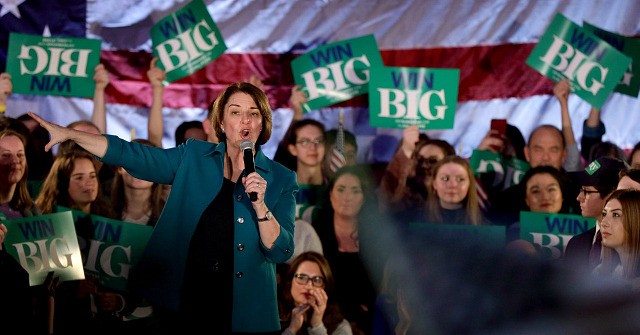 As reported by Breitbart News’s Joshua Caplan, “The Iowa Democrat Party announced late Monday evening that it discovered ‘inconsistencies’ in the reporting of three sets of caucus results as delays continue to plague the first-in-the-nation primary contest.”

“We are feeling so good tonight,” Klobuchar said as she took the stage. “Somehow, someway, I am gonna get on a plane, tonight, to New Hampshire … we are bringing this ticket to New Hampshire.”

“Even in a crowded field of candidates, even during the well-earned impeachment hearing of Donald J. Trump, which kept me bolted to my Senate desk for the last two weeks, we kept fighting and you kept fighting for me,” Klobuchar continued, before joking about beginning her campaign “in a blizzard” and mocking those who doubted her candidacy.

We know that our party can’t win big by trying to out-divide the divider in chief. We know that we win by bringing people with us instead of shutting them out. Donald Trump’s worst nightmare is that people in the middle, the people that have had enough of the name-calling and mud-slinging, have a candidate to vote for in November. Donald Trump’s worst nightmare is that our fired-up Democrats will march to victory alongside a big coalition of independents and moderate Republicans that see this election just as we do.

Klobuchar also claimed Monday night during her speech that “our country cannot take another four years of Donald Trump”:

Klobuchar went on to say that Trump “blames everyone for our problems.”