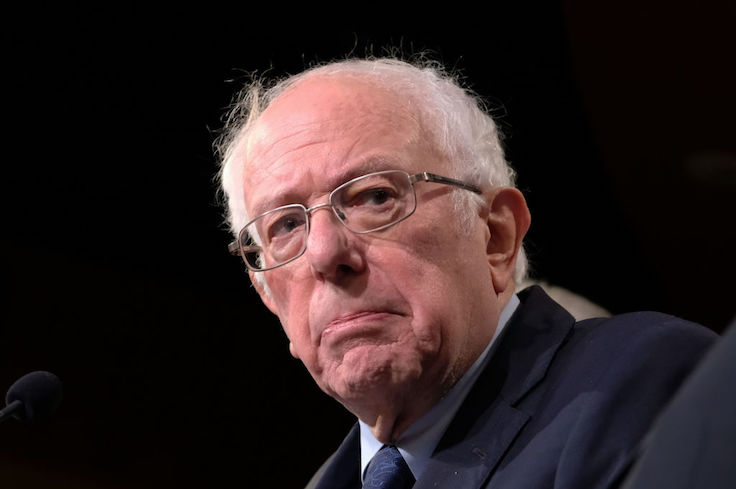 Democratic presidential candidate Bernie Sanders touted the endorsement of Ako Abdul-Samad, who once defended an al Qaeda propagandist and runs a Muslim-American organization so controversial that other Democrats have returned its donations.

“I’m honored to have Rep. Abdul-Samad’s endorsement,” Sen. Sanders (I., Vt.) tweeted ahead of Monday’s Iowa caucuses. “Together we’re going to win in Iowa, win the primary, defeat Trump, and build a nation that works for the working people of this country.”

I’m honored to have Rep. Abdul-Samad’s endorsement. Together we’re going to win in Iowa, win the primary, defeat Trump, and build a nation that works for the working people of this country.https://t.co/xtZpGbL1YI

Abdul-Samad is an Iowa state representative and serves as chairman of the American Muslim Alliance (AMA), which has defended terrorist groups and domestic radicals. Other Democrats have returned AMA donations, rather than promote its endorsement. Hillary Clinton returned $50,000 in political contributions from the group after AMA founder Agha Saeed said Palestinians were justified in the use of violence against Israelis. “The statements that are attributed to the organization and some of its members are offensive and outrageous,” Clinton said at the time.

The New York Times story on the Clinton controversy noted that several other members of AMA had been accused of making anti-Semitic comments, including Holocaust denial. After being informed of Clinton’s decision to return the donations, AMA’s Massachusetts chairman told the Times that the “Jewish community lobby” was “trying to intimidate her.”

The Sanders campaign did not respond to a request for comment.

Abdul-Samad took control of the AMA in 2017 and moved the organization’s headquarters to Iowa. The imam had previously worked with AMA to demand the freedom of Aafia Siddiqui, the infamous “Lady al Qaeda” operative convicted of attempted murder of U.S. officials in Afghanistan. Throughout her trial, Siddiqui objected to her Jewish lawyers and tried to exclude Jews from the jury pool.

“This is a verdict coming from Israel, not America,” she said following her conviction.

In addition to defending terrorist sympathizers, Abdul-Samad has also praised domestic hate groups. In a 1998 interview with Cityweek, Abdul-Samad defended local Nation of Islam leader Preston Muhammad, described by the paper as “one of Minister Louis Farrakhan’s most trusted associates.” Abdul-Samad told Cityweek that the Nation was “interested in helping people” and that “he has known Muhammad for almost 20 years.”

“We both have the same interest in dealing with the community,” Abdul-Samad said. “We’d be foolish not to support trying to give youths and adults an alternative.” Abdul-Samad admitted he only interacted with Farrakhan’s followers when they sold newspapers on his street, though he would later give an interview to the Nation of Islam newspaper Final Call in 2007.

AMA national director Mahdi Bray also hugged Farrakhan in a video he posted to YouTube in 2013. The video attracted renewed scrutiny in 2018 when it emerged that one of the other men in the video was Democratic National Committee vice chairman Keith Ellison. Ellison endorsed Sanders for president in 2019. The Vermont senator’s past associations with anti-Semitic leaders have also attracted scrutiny on the campaign trail. As a congressman in 1994, Sanders voted against a resolution condemning anti-Semitic rhetoric from a leading member of both the Nation of Islam and the New Black Panther Party.

Abdul-Samad is a former member of the Black Panther Party. He told the Des Moines Register in 2006 that he did not regret joining the violent militant black nationalist group. “We never did anything illegal,” he said, leading the paper to note his string of arrests and that “he was with five other Black Panthers at the group’s headquarters in the 1400 block of Forrest Avenue when a bomb exploded, leveling the building.”

Abdul-Samad did not respond to a request for comment about his past comments and his decision to endorse Sanders.

The results of the Iowa caucuses are still unknown after the state Democratic Party reported discrepancies in its vote-counting app. The party has said it plans to release the final tally on Tuesday.

Alex is a staff writer at the Washington Free Beacon. He graduated from the University of Notre Dame in 2012. Before joining the Free Beacon, he was a writer for Mediaite and The Daily Caller. He is originally from Buffalo, New York, but regrettably now lives in Washington, D.C. He can be reached at griswold@freebeacon.com.